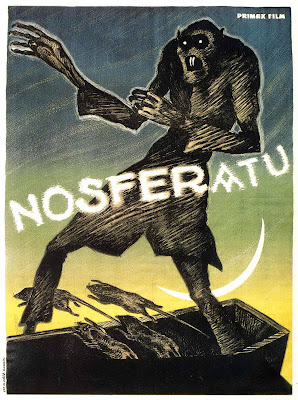 For a silent film accompanist, Halloween is the most wonderful time of the year.

If nothing else, silent film is other-worldly enough to be a general draw during this macabre part of the calendar. And so the screenings come, one by one...

But this cycle that system kinda broke down for various reasons. And so now I'm doing music for a lot of different films one after another. It's scary on a whole new level.

Alas, we're in the smaller "screening" room, so it might just happen that we sell out.

If that happens, I'll arrange for a repeat as soon as feasible. But if you really really hope to see it this Friday night, I suggest getting tickets beforehand online at www.redrivertheatres.org.

After 'Nosferatu,' it's 'Phantom of the Opera' (1925) on Saturday, Oct. 25 at the Leavitt Theatre in Ogunquit, Maine, and then a Lon Chaney double feature on Sunday, Oct. 26 at the Wilton (N.H.) Town Hall Theatre.

And more after that, but one weekend at a time.

With 'Nosferatu,' I like to remind attendees that vampires were not a cliché with early cinema audiences.

Original audiences had never seen anything like the vampire played by Max Schreck, and it must have been a genuinely unsettling experience. 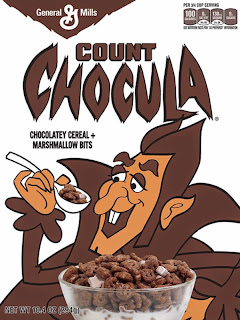 To make the point of how our frame of reference has changed, I bring along an unusual prop: a box of 'Count Chocula' breakfast cereal.

How terrifying can a vampire be when the figure has been turned into a cartoon breakfast cereal pitchman? (Actually, very much so, if you read the ingredients.)

Today, the vampire legend has been largely detoothed, so to speak, by overexposure, familiarity and commercialism. Heck, kids today learn numbers on Sesame Street from "The Count," a cuddly muppet.

Fortunately, director F.W. Murnau's visual style, and the other-worldly quality of silent film itself, is more than enough to bring audiences back into the spirit of the original 'Nosferatu.'

To see for yourself, I invite you to join us. For more specifics about 'Nosferatu' on Friday, Oct. 24 at Red River Theatres, check out the press release below.

And remember: in silent film, no one can hear you scream!

And P.S.: For yet more provocative thoughts on old vampire films, check out recent posts at www.nitratediva.wordpress.com. Some great stuff about Tod Browning's early talkie 'Dracula' (1931) as well as the lesser-known Spanish language version of the 1931 Universal classic, which Red River will screen on Friday, Oct. 31. 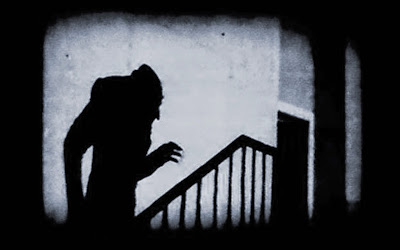 The shadow of Nosferatu as the creature closes in on a victim.

CONCORD, N.H.—Get into the Halloween spirit with a classic silent horror film!

The film will include live music performed by New Hampshire-based silent film accompanist Jeff Rapsis. Admission is $10 per person.

'Nosferatu' (1922), directed by German filmmaker F.W. Murnau, remains a landmark work of the cinematic horror genre. It was among the first movies to use visual design to contribute to an overall sense of terror. To modern viewers, the passage of time has made this unusual film seem even more strange and otherworldly.

"The original 'Nosferatu' is a film that seems to get creepier as more time goes by," said Rapsis, a resident of Bedford, N.H. who ranks as one of the nation's leading silent film accompanists. "It's a great way to celebrate Halloween and the power of silent film to transport audiences to strange and unusual places."

Although 'Nosferatu' is suitable for all family members, the overall program may be too much for very young children to enjoy.

“Early film version of Dracula is brilliantly eerie, full of imaginative touches that none of the later films quite recaptured,” Leonard Maltin wrote recently. Critic Dave Kehr of the Chicago Reader called 'Nosferatu' "...a masterpiece of the German silent cinema and easily the most effective version of Dracula on record.” 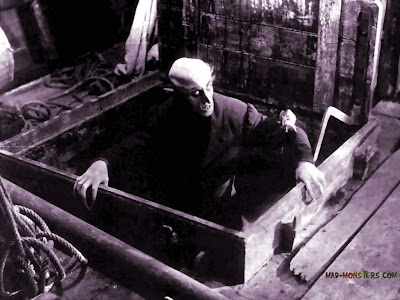 Max Schreck as Nosferatu and friend emerge from the hold of a ship in 'Nosferatu' (1922).

Despite the status of 'Nosferatu' as a landmark of early cinema, it was almost lost forever.

For instance, "vampire" became "Nosferatu" and "Count Dracula" became "Count Orlok." After the film was released, Stoker's widow filed a copyright infringement lawsuit and won; all known prints and negatives were destroyed under the terms of settlement.

However, intact copies of the the film would surface later, allowing 'Nosferatu' to be restored and screened today as audiences originally saw it. The image of actor Max Schreck as the vampire has become so well known that it showed up in a recent episode of 'Sponge Bob Squarepants.'

‘Nosferatu’ will be shown on Friday, Oct. 24 at 7 p.m. in the Jaclyn Simchik Screening Room at Red River Theatres, 11 South Main St., Concord, N.H. Admission is $10 per person; for more info, call (603) 224-4600 or visit www.redrivertheatres.org. For more information about the music, visit www.jeffrapsis.com.