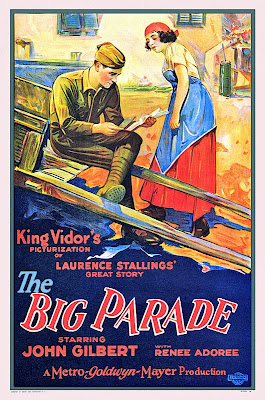 A colorful vintage poster for 'The Big Parade' (1925), one of the highest-grossing films of the silent era.

Just a quick note here ahead of a screening coming up of an unusually good silent drama.

Tomorrow night (Wednesday, Oct. 15 at 7 p.m.) I'll be at the keyboard for 'The Big Parade' (1925), MGM's blockbuster drama about U.S. doughboys who brashly head off to fight in World War I, only to return changed forever—if they return at all.

We're running 35mm print of the flick in Harvard University's Carpenter Center for the Visual Arts, which is between Quincy Street and Prescott Street in Cambridge, Mass., just outside Harvard Yard proper. (It's a short walk from the Harvard Square T Station.)

Although the screening is for a class, it's open to the public. And it's free! So if you're within traveling distance, it's a great chance to take in one of the top silents in an actual theater with live music and an audience. (And in 35mm, too!)

It's especially good value, because with 'The Big Parade,' I think you actually get two motion pictures, not one.

King Vidor filmed the first 90 minutes or so of 'The Big Parade' as if it was a standard "join the army" drama, with John Gilbert and his buddies going off to rural France and making light-hearted ooh-la-la with the ladies. You almost expect Constance Talmadge to show up, fleeing the likes of Ronald Colman. 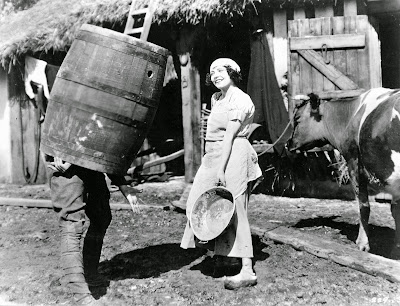 But the mood shifts dramatically for the film's final hour. (Yes, the whole thing runs about 2½ hours long.)

I don't want to get into enough detail to spoil things. But I think a big part of the film's emotional impact is that Vidor first takes enough time to allow us to get to know the characters, and for them to get to know each other, before everything changes.

And so our emotions are fully vested when the characters are suddenly put into the unknown territory that makes up the balance of the film.

We can't not watch. We can't not care. And it makes for some powerfully effective cinema, I think. 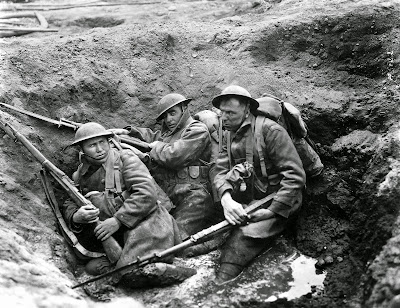 It also makes for an interesting accompaniment challenge. No matter what happens in the first part, you need to hold back so you have some place to go when things escalate.

To ensure this happens, I'm thinking of deliberately keeping things set at a "chamber orchestra" level during the first part, holding the full orchestra in reserve until it's really justified.

As an incentive, I try to keep in mind that audiences at the time this film was released had really never seen anything like what Vidor depicted on the screen, and many were quite shocked.

Nowadays, of course, we've seen it all, which tends to blunt the impact of what might have been mesmerizing movies were new. But music, if done a certain way, can help the film retain the dramatic punch that I believe Vidor was going for.

Will I be able to pull it off? Find out by joining 'The Big Parade' down at "Hah-vad" tomorrow night!

And after this, it's non-stop Halloween screenings until the first weekend of November, starting with a Lon Chaney "Chiller Theatre" double feature up at Brandon Town Hall in Brandon, Vt. on Saturday, Oct. 18.

It's "Chiller Theatre," by the way, because the building has no heat. But more on that later this week...