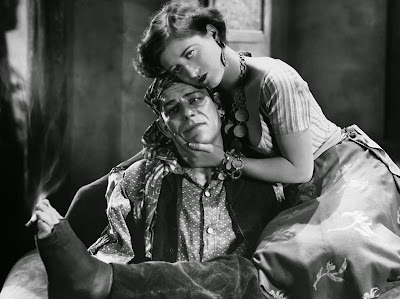 Lon Chaney relaxes with a cigarette and Joan Crawford in 'The Unknown' (1927).

A Lon Chaney double feature? Halloween can't be far behind.

And yes, the Chaney double feature this Saturday up in Brandon, Vt. is a great way to get in the mood for getting scared.

After all, if Halloween is about costumes, then Chaney, dubbed "the Man of 1,000 Faces" for his pioneering make-up wizardry, ought to rank as a patron saint of sorts.

Weirdly, the two films on the program are not ones in which Chaney obscures his face with some ghoulish get-up, such as he did so famously in 'Hunchback of Notre Dame' (1923) and 'The Phantom of the Opera' (1925).

Instead, in the 'Unknown' (1927), Chaney is forced to cope with the disfigurement not of his face, but of another vital part of his body.

And in 'The Unholy Three,' Chaney does dress up as someone else, but it's a kindly grandmother!

I don't want to give away too much more about either film. If you're curious, the press release below has a bit more info. 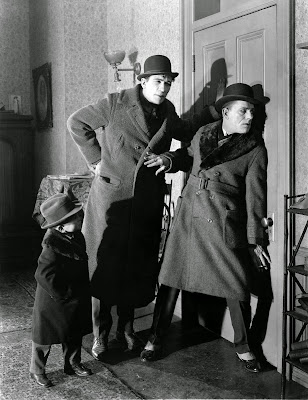 Small, medium, large: humans come in all sizes in Chaney pictures such as 'The Unholy Three.'

But it's worth pointing out that as the years pass, the Chaney films seem to get more twisted and surprising. In other words, they're aging well.

In presenting them to modern audiences, I continually find people surprised at how intense these films can be as they explore the dark side of obsession, passion, and the grotesque.

At its best, silent film is about big emotions. And in many ways, no one worked on a larger emotional scale than Chaney.

See for yourself at our double feature this weekend up in Vermont.

As an added incentive, each Chaney film includes a big-name co-star. 'The Unknown' features Joan Crawford in an early role, while 'The Unholy Three' has Australian actress Mae Busch, who later achieved immortality as a colorful female nemesis of Stan Laurel and Oliver Hardy.

Not enough? I'm doing an additional Chaney program on Sunday, Oct. 26 in Wilton, N.H. that includes 'West of Zanzibar' (1927), in which Chaney plays another variation "disfigured man obsessed with revenge" theme.

More on that next week. For now, here's the press release about the Chaney program on Saturday, Oct. 18 at 7 p.m. at Brandon Community Center in Brandon, Vt.

See you there—unless you come in costume as the Invisible Man. A vintage poster for 'The Unknown' (1927) starring Lon Chaney and Joan Crawford.

The program starts at 7 p.m. and will feature live accompaniment by silent film musician Jeff Rapsis.

Admission is free; donations are encouraged, with proceeds to support ongoing renovation of Brandon Town Hall.

The event is being dubbed "Chiller Theatre" due to the building's lack of a heating system. Organizers ask attendees to check the weather and bring along sweaters and blankets if a cold evening is anticipated.

'The Unknown' (1927) features Chaney as "Alonzo the Armless," a circus knife-thrower with a dark past who uses his feet to perform his act. The film co-stars a very young Joan Crawford.

Both films were produced by MGM and directed by Tod Browning, who specialized in exploring the dark and creepy side of circus life. Browning's career later culminated with his bizarre early talkie film 'Freaks' (1932), starring a cast of deformed carnival performers.

In 'The Unknown,' Chaney's character "Alonzo the Armless" is indeed without both arms. This forces him to use his feet to perform tasks that range from throwing knives in his circus act to smoking a cigarette. In one scene, Chaney uses his feet to strum a guitar. 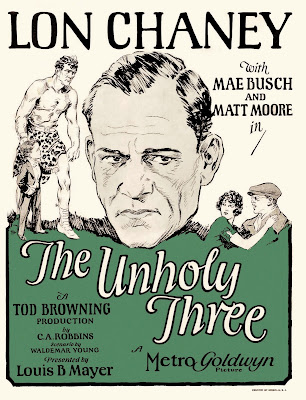 To modern viewers, the passage of time has made these unusual films seem even more strange and otherworldly.

Both films are suitable for all family members, but the overall program may be too much for very young children to enjoy.

All movies in the Brandon Town Hall's silent film series were popular when first seen by audiences in the 1920s, but are rarely screened today in a way that allows them to be seen at their best. They were not made to be shown in the home. To revive them, organizers aim to show the films as they were intended—in top quality restored prints, on a large screen, with live music, and before a live audience.

"If you can put it all together again, these films still contain tremendous excitement," Rapsis said. "By staging these screenings of features from Hollywood's early days, you can see why people first fell in love with the movies."

'The Unknown’ (1927) and 'The Unholy Three' (1925) will be shown on Saturday, Oct. 18 at 7 p.m. at the Brandon Town Hall and Community Center, Route 7 in Brandon, Vt. Admission is free; donations are encouraged, with proceeds to support ongoing renovation of the town hall. For more information, visit www.brandontownhall.org.