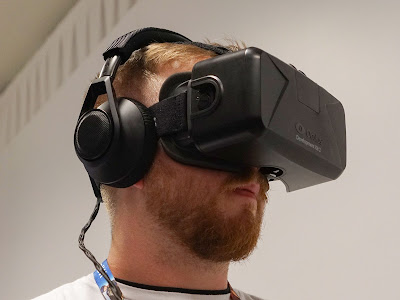 Sometimes I feel my head is about to explode.

Yesterday morning I visited the "Oculus Room" at Facebook headquarters in Menlo Park, Callif., where I tried out an advanced virtual reality system due on the market next year.

And then that evening, I sat down at an acoustic piano and played live music for a silent film program at the Niles Essanay Silent Film Museum, across the Bay in Niles, Calif.

So in the span of a few hours, I experienced the latest in cutting edge visual entertainment, and then labored to help revive a form of visual pop culture from a century ago.

Help! Too much jarring contrast!

What I actually did was time travel. Or at least it seemed like I did, which, by the standards of virtual reality, is the same thing.

But this is what happens when you come to Silicon Valley to accompany a silent film program, and your brother-in-law works at Facebook. The shifts of perspective are as glaring as anything H.G. Wells might have imagined.

I actually hadn't heard of Oculus, causing my brother-in-law to laugh good-naturedly at my cluelessness as were driving to Facebook in his Mustang with the top down. (Hey, but then he hadn't heard of Anna Q. Nilssen, and she was really big!)

Oculus is the big new thing, at least in the Facebook eco-system. Hence my visit to "the Oculus Room," where employees can sample a prototype of the system.

To do this, I donned a set of black headgear, which felt like what I wore when sparring at the boxing gym, except the eyes were covered with goggles.

And I got to experience ("see" isn't the right word) Oculus via a demo narrated by a man with a British accent who told me the technology promised unparalleled freedom to satisfy mankind's urge to create and explore new worlds.

He told me this while I seemed to be moving forward through a corridor lined with images of past futuristic visions, which included scenes from the silent film epic 'Metropolis.'

I have to say, Oculus was technically impressive! No matter which way I turned, the view matched what you'd expect. Moving forward through a junkyard full of rusting old tanks, I could turn around and in the distance see the backside of tanks I'd passed by long ago.

And it's all run off Windows, and managed by a few plug-in peripherals to track your motions. So it was easy to use, once we got Windows to boot up properly. :)

As I understand it, Facebook has a team working hard to find industrial and business applications for the Oculus platform. But the focus for now is on gaming and entertainment possibilities, where new worlds to explore are always sought.

But one thing brought me up short. At one point, the demo brought me to the back of a large, well-appointed movie theater. Rows of plush red seats were arrayed before me, all facing a good-sized curtained screen.

The narrator promised me the ability to experience movie-theater quality entertainment in any way I pleased, at any time and from any angle or in any configuration. Wow!

But I couldn't help notice that all those seats were empty. So what about that crucial part of cinema: the shared audience experience?

Most people today see the "audience experience" as a negative: people talking, blocking your view, looking at their cell phones, etc.

But in many ways, the shared audience reaction is crucial to a movie's full impact. That's certainly the case in silent cinema, when the only way to see a film was in a theater with an audience.

Filmmakers back then knew that, and often timed their pace and editing to accommodate the reaction of a large audience.

So what does virtual reality have to replace or augment the audience experience? Put another way: What's the point of seeing a movie in a big theater if all those seats are empty?

I asked my brother-in-law, and the best we could come up with was an option that allowed a user to populate the virtual theater with other people.

And because it's virtual, the user could control some or all aspects of the audience, as he or she wishes.

So I could fill the theater with figures from history, for example. Imagine watching Charlie Chaplin's 'The Great Dictator' sitting next to Adolf Hitler!

Or maybe have everyone in the theater weigh 250 pounds or more, which would make me feel svelte. Hey, I'm beginning to like virtual reality.

Well, we'll see if Mark Zuckerberg incorporates any of these features before Oculus is ready for prime time.

As it is, I have seen the future, and it's exciting, although slightly blurry and color shifted.

Later, as we walked around Facebook's enormous new headquarters building, the little clip from 'Metropolis' got me thinking. And the more I looked around, the more I realized that they way Zuckerberg runs the place has its ancestry in, yes, silent film.

Consider: like a lot of high profile Silicon Valley companies, Facebook's campus is one-third office and two-thirds playground. Work stations are out in the open, games and free food abound, and art is everywhere.

And it occurred to me: employees are encouraged to collaborate, brainstorm, create, and problem-solve in ways that mirror the way Buster Keaton made his great films in the 1920s.

At the Keaton studio, they'd often make up big chunks of a film through improvisation on the set. As Buster often said, there was no way to plan out business in advance. Some of his best comedy would come from working with the physical set-up in place.

And if they got into a situation that no one knew how to resolve, they'd do something that people found surprising even then. They'd knock off and go play baseball!

And they'd continue to play ball, inning after inning, until someone came up with a way for Buster to get out of a jam, or for the story to move forward, or whatever else that had stumped them.

Buster seems to have instinctively known that by letting his team play, the end result would be creativity that could not happen any other way.

The result, of course, was a unique body of work that pushed the art of filmmaking into new places and has stood the test of time. And I have to believe a lot of the special qualities of Keaton's great silents came from the loose "let's see what happens" way in which they were often made.

Of course careful planning and logistics went into many of Keaton's legendary sequences. That locomotive crashing through the burning bridge in 'The General' was anything but an accident, although it appears to be one on screen.

But once Keaton signed with MGM and was forced to make pictures with a script, the quality of his work changed. And gone was the innovative filmmaker who compulsively explored the nature of a new toy called the motion picture camera, and the medium of film itself.

So in Silicon Valley, it seems that Zuckerberg and so many other tech titans are using that same sensibility to foster innovation in the digital age. Play can unleash unexpected creativity, which is often where the real leaps forward happen.

It worked for Keaton, and it seems to work for the tech innovators of Silicon Valley, too.

And the realization of things like this---that how a filmmaker such as Keaton worked in the 1920s anticipated crucial underpinnings of industrial tech innovation today---is why my head feels ready to explode.

And so, armed with a renewed sense of relevance for silent film, off I went to the Niles Essanay Museum to create music for Rockliffe Fellowes and Anna Q. Nilsson in 'Regeneration' (1915), a film so old that people in it drink beer from buckets hauled home from the local tavern.

A hundred years ago, that was how they did virtual reality.