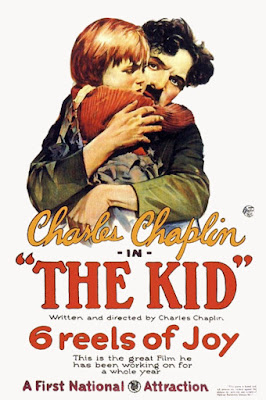 I'm looking forward to this Sunday's program of Charlie Chaplin comedies at the Wilton (N.H.) Town Hall Theatre, and not only because the films are great family entertainment.

For many people with an interest in silent movies, including myself, Chaplin was the gateway drug into vintage cinema.

Seeing his work for the first time (in my case, back in junior high school) sparked a lifelong interest in the mute world that he and so many others inhabited -- the world of stories told through gesture and action, but not burdened by the clutter and clatter of words, words, words.

It was life stripped down to its barest essentials, bereft even of color in most cases. For me, this cleared the decks, resulting in an art form well adapted to tell stories in a way that life felt like to me -- a place of big emotions, intense feelings, and unforgettable experiences and people and places. 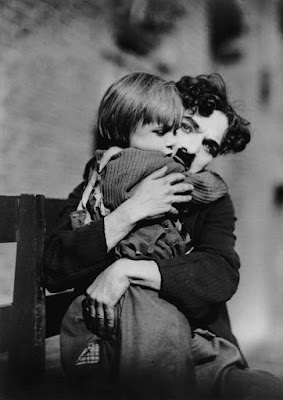 The still photo from 'The Kid' that was used in the poster.

If silent film is a grand hotel (hey, there are sillier analogies), then for me Chaplin was the bellhop who first welcomed me upon arrival, brought in my bags for me, and showed me to my room in this sprawling edifice, which I've been exploring ever since.

So every Chaplin program is exciting to me in that it's possible what happened to me might happen to someone else. For that someone else, it might be the start of a long journey of exploration and discovery.

To join in the fun, come to the Town Hall Theatre in Wilton, N.H. on Sunday, Nov. 29, where we're running Chaplin's breakthrough feature 'The Kid' (1921) and several of his short comedies.

More information is in the press release below. Speaking of which: we've gotten some good attention in the local media for this program, which is designed to give the whole family a way to wind up the holiday weekend in a fun way.

So hoping for a big turnout. We'll see! 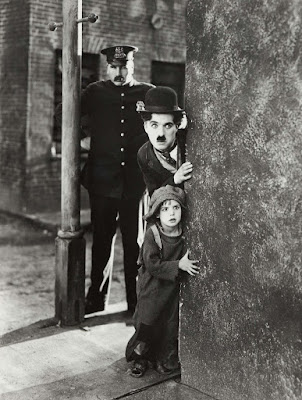 Chaplin's 'The Kid' to screen on Sunday, Nov. 29 at Town Hall Theatre

WILTON, N.H.—Silent film with live music returns to the Town Hall Theatre with a screening of Charlie Chaplin's classic comedy/drama 'The Kid' (1921) on Sunday, Nov. 29 at 4:30 p.m.

Admission is free, with a suggested donation of $5 per person to help defray expenses.

The program, coming at the end of Thanksgiving weekend, is a chance for the whole family to get out to a fun event suitable for all ages.

The Chaplin program continues the monthly series of silent film with live music at the Wilton Town Hall Theatre. The series provides local audiences the opportunity to experience silent film as it was intended to be shown: on the big screen, in restored prints, with live music, and with an audience.

'The Kid' will be preceded by several shorter Chaplin comedies made earlier in his career that helped establish his worldwide popularity.

• Sunday, Dec. 27, 2015, 4:30 p.m.: Frank Capra's 'The Strong Man' (1926). With World War I over, baby-faced soldier Harry Langdon searches for the girl who sent such moving letters to him in the trenches. Directed by a very young Frank Capra, 'The Strong Man' is today hailed as one of the greatest comedies of the silent film era.

• Sunday, Feb. 14, 2016, 4:30 p.m.: Greta Garbo in 'The Kiss' (1929). Celebrate Valentine's Day with this steamy romantic thriller about a woman in an unhappy marriage who unexpectedly finds true love with another man. Will she risk everything and resort to murder?

'The Kid' (1921) starring Charlie Chaplin and Jackie Coogan, will be screened with live music on Sunday, Nov. 29 at 4:30 p.m. at the Wilton Town Hall Theatre, 40 Main St., Wilton, N.H. Admission to the screening is free; a donation of $5 per person is suggested.