Cinema without training wheels: 'The General'
and 'Four Horsemen of the Apocalypse' 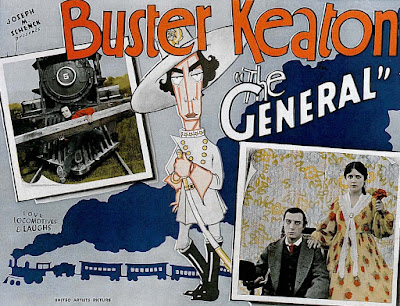 This past weekend marked the birth of a new silent film series and the culmination of another. Here's a report.

I've long wanted to do a silent film program in New Hampshire's Seacoast area. So when a chance came up to start one, I went for it.

The chance came in the form of writer/educator Andrew Lapham Fersch, who runs the Penn Program, an innovative homeschool co-op for high-school-aged students based in Exeter.

Andrew attended a screening last February at the Aeronaut Brewery in Somerville, Mass., where I sometimes do silent films. This particular screening almost didn't happen due to a blizzard that hit our area that day.

But the show went on, and I'm glad it did, because Andrew introduced himself and asked about running a silent film for his kids in the Penn Program.

So later that spring, I found myself setting up my keyboard and projector in the second-floor apartment in downtown Exeter that serves as the program's headquarters.

Students and family members enjoyed the show, which led to the idea of doing a series at nearby Exeter Town Hall. This would give Seacoast area residents a chance to see some great films with live music, and would also support the Penn Program. 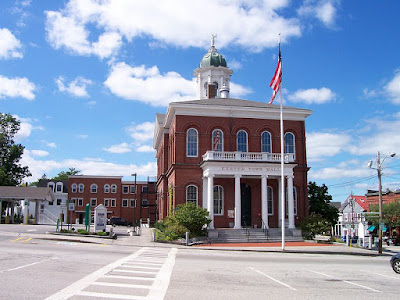 Exeter Town Hall, where Abraham Lincoln spoke in 1860 during his one trip to New Hampshire.

So I went about renting the town hall, getting posters made up, and doing all the P.T. Barnum-like things you have to do to get something like this off the ground.

And lo, it all came to pass last Friday night, when a good-sized crowd turned out for a Buster Keaton program. We opened with the classic Keaton short 'One Week' as a sort of house-warming, and then ran 'The General' to much acclaim.

The turnout surprised me, because other than posters and some word of mouth, we didn't get much publicity. Maybe I'm wearing my welcome out with the local press with all the screenings I do, but there was almost no coverage.

So there I was, warning everyone beforehand that we shouldn't expect a big crowd at the first show, as these things take time to build and for people to find them. And then all these people start coming in.

The Town Hall does not allow admission charges, so we could only suggest donations. I'm pleased to report that people were more than generous, making the effort worthwhile for the Penn Program right off the bat.

For me, the highlight was seeing four of the students explain a little about the Penn Program and what they do in it. Among the projects are cycling across New Hampshire north to south, starting at the Canadian border and ending about 200 miles at the Mass. line. Hey, where was this program when I was in high school?!

In addition to introducing Buster, I found myself making unplanned comments about the state of education in the United States, and how important it is to encourage young people to be creative.

Maybe it's because Abraham Lincoln once spoke at Exeter Town Hall, or perhaps because it's often used for "Town Hall" gatherings by candidates in New Hampshire's first-in-the-nation presidential primary.

Anyway, I found myself making a stump speech, saying the recent focus on science and math is important, but if students don't also develop their creativity, we won't get innovations and entrepreneurship that drive our economy and move us forward and underwrite our whole standard of living.

Luckily for me, no food is allowed in Exeter Town Hall, so anyone hankering to throw anything lacked ammunition.

So with the success of 'The General,' I'm looking forward to other screenings in Exeter: 'Metropolis' (1927) in January; a Harold Lloyd program in March, and 'The Big Parade' (1925) in May. 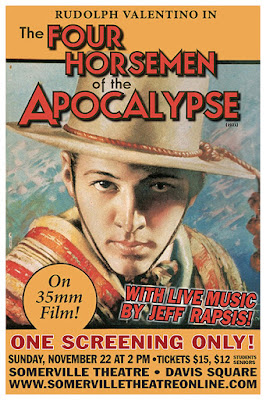 • With 'The Four Horsemen of the Apocalypse' (1921), there was equal drama off-screen leading up to running the film on Sunday, Nov. 22 at the Somerville Theatre.

The print that arrived at the theater just a few days before showtime turned out to the be 1962 remake starring Glenn Ford, not the silent original starring Rudolph Valentino.

But thanks to the miracle of overnight shipping, the print of the correct version was delivered on Friday morning, allowing the show to go on.

To me, this was the culmination of what we've been doing at Somerville for a few years now: showing silent films not just in 35mm, but recreating the whole experience that these films were designed for: the live music, the theater, the live audience. 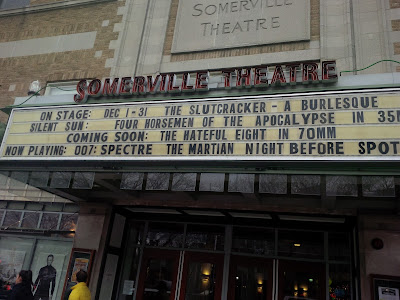 The Somerville Theatre's marquee as it appeared just before showtime, and just before I spilled coffee all over my suit by lifting up my phone to take a picture in the middle of a busy street.

In that environment, many films come to life in surprising ways. Somehow, the comedy seems funnier, the drama seems more dramatic, and so on.

And 'Four Horsemen' is one of those films. As a public domain film, it's freely available. And seen in one of the many blurry versions that circulate online on or DVD, it's ludicrous.

But put on the screen the way it was intended to be shown, you can still be swept away by a movie that was one of the top box office sensations of the silent era. 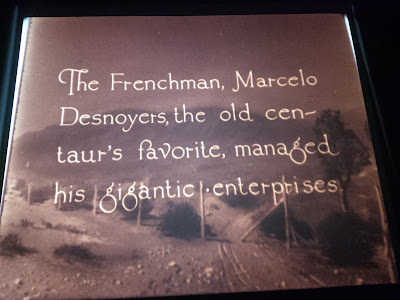 An image of the Somerville's screen taken while projectionist David Kornfeld was still adjusting the frame masking.

So much I could say about this film, which to me is a kind of bridge between the early silent era and the more polished filmmaking of the 1920s.

Let me repeat here two points I tried to make to our audience prior to the screening:

1. It's known as a Rudy Valentino film, but 'Four Horsemen' is really more of an ensemble piece, with about a dozen performers playing important roles.

And one of those actors is Alan Hale Sr., who will seem vaguely familiar to anyone who grew up watching reruns of 1960s television sit-coms.

That's because Alan Hale Sr. begat Alan Hale Jr., who would achieve immortality by playing the Skipper on Gilligan's Island.

And say again I say—the more silent film I see, the more I realize that so much of the DNA of pop culture to come can be found in it. 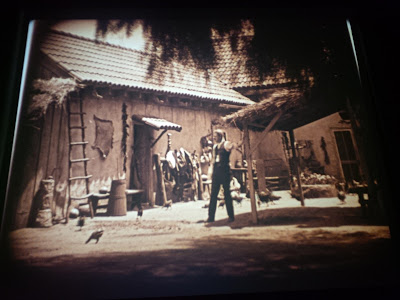 Another screen shot, this one of the first appearance of the Skipper's father.

2. Regarding the "bridge" role that "Four Horsemen" played: I said D.W. Griffith's great epics of the teens, such as 'The Birth of a Nation' (1915) and 'Intolerance' (1916), showed audiences the promise of cinema.

But 'Four Horsemen' was among the first movies to actually deliver on that promise.

You can see this most vividly in the free incorporation of fantastic visual allegory to depict the four horsemen themselves.

But this level of cinematic assurance and confidence is visible throughout the film, even in small moments such as "open door" shots.

Several times, someone will open a door, only to reveal someone else in a natural place but framed by the door (and the movie frame itself) such as to draw our attention.

It's film-making technique that holds up today. Even after nearly a century, it's so smooth you don't even notice it.

To me, that adds a special level of excitement to 'The Four Horsemen of the Apocalypse,' even on top of its absorbing story and compelling characters.

It's something that underpins my interest in silent film in general: you can feel the excitement of movie-makers as the discovered the potential of this new medium. There was no film school, and so you can sense the joy of discovery that I think is still evident in so many movies.

Nowadays, we've seen it all. So I find it enormously compelling to revisit the era of genuine discovery—a time when we hadn't seen it all, but we were still discovering. 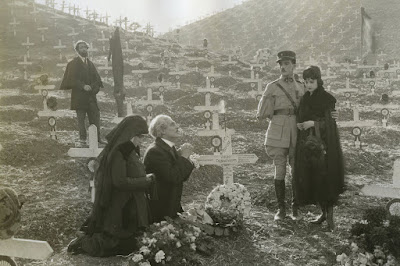 Nigel de Brulier prepares to sum it all up in 'Four Horsemen of the Apocalypse.'

And I'm especially moved by the ending of this film, where the Tchernoff character (portrayed by Nigel de Brulier) stands amid endless graves of victims of the Great War and exclaims, "I knew them all."

Wow! Way to go for a relatively minor role to put everything we've seen into perspective!

To me, this celebrates the connectedness of all humanity past and present—and the idea that if somehow we work to achieve justice in the unknown future, it will help absolve humanity of all the sins of its past. That's a wonderful and powerful and all-embracing sentiment just by itself.

But it also celebrates cinema's new-found ability to communicate such notions in a powerful way that no art form had never done before. "I knew them all!" to me celebrates the idea that we cannot unsee what the movies have shown us and everyone else in the theater with us, and in theaters around the world.

In other words, we're all in this together, and there's no going back. So let's do everything we can to make the most of this amazing new thing, the motion picture camera.

To me, when I see this sort of moment in silent cinema, I get a feeling that's probably related to what a parent feels when a child first rides a bike without help. It's pride, and also a sense of being part of something that's greater than both of us.

If I ever compile these thoughts into some kind of book, I think know what the title would be: "Present at the Creation."

And our screening of 'Four Horsemen' felt to me like the culmination of something that I've been learning about for some time now: creating music that helps bring an older film to life and doing it in a way that helps modern audiences accept it as something real and vital, rather than an antique from another era that has no chance to engage them.

But the schedule continues, with more screenings in December, including my first-ever cobbled-together tour.

Order your T-shirts today. Available only in XL or above because the tour's name won't fit on shirts any smaller. 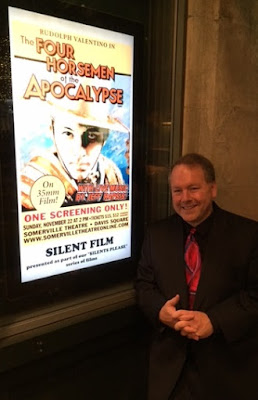 It's hard to outshine Rudolph Valentino, especially when he has the advantage of appearing on a backlit screen.