This weekend: a double shot of W.C. Fields
at the Library of Congress / Packard Center 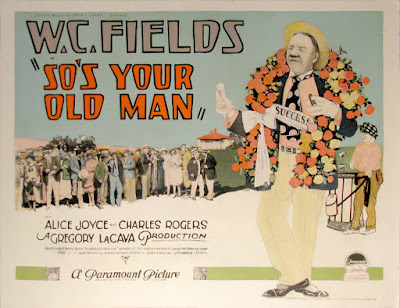 On Saturday afternoon, I'll fly down to Washington, D.C., then drive about an hour south into the Virginia countryside.

Why? To accompany a pair of W.C. Fields silent features, of course!

Did you think I was visiting Luray Caverns?

Although that might make sense, as Luray Caverns is home to the "Great Stalacpipe Organ," something I remember from stacks of brochures we'd collect during family roadtrips. 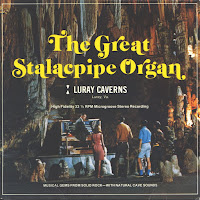 Hey, has anyone ever considered a silent film showing down there?

Thanks to Rob Stone and his colleagues at the Library of Congress Packard Center for inviting me again to accompany a program.

I went down there earlier this year to accompany a Gloria Swanson program, and then again for the most recent "Mostly Lost" festival of unidentified silent material.

It's a real privilege to work with folks such as Rob and Mike Mashon and so many others at the Library of Congress who work to preserve our nation's media history and heritage.

I see what they do, and feel a little bit better about filing my federal income tax return.

And because much of what they curate was pop culture in its day, there's occasionally some overlap with celebrities, who sometimes donate their archives to the Library of Congress.

Earlier this year, Rob was the point man in the Packard Center's acquisition of the personal archive of Jerry Lewis, who donated his personal film collection, including home movies and rare outtakes.

The process culminated in Lewis visiting Culpeper last month (darn, just missed him), to tour the Packard Center and do a performance at the State Theatre, a restored venue in town. 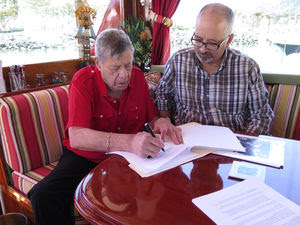 Although the actual Library of Congress is in downtown D.C., the sprawling Packard Campus is where physical film and audio materials are curated, cataloged, and stored.

And in the case of film, it's where rare prints are shown to the public. The nicely appointed Packard Theater runs a heavy schedule of vintage screenings of a wide range of titles.

Saturday night's double-bill is part of a weekend Fields program, portions of which will be introduced by the great gentleman's granddaughter, Dr. Harriet Fields.

If she's on hand for the silents, expect me to attempt to get her to pose for a snapshot. I mother used to say: never pass up a chance to be photographed with vintage film royalty.

I've done both of these films before, and I've found the Fields silents really hold up well.

Although he wasn't a truly cinematic silent clown such as Chaplin or Lloyd, his films were popular, and they still get big laughs today.

I'm not sure how much of this is due to our familiarity with the character he played later on in talkies, in which we actually hear his unforgettable delivery.

If you've ever heard Fields talk, it's hard not to imagine his nasal inflections in his silent pictures when reading title cards. Ahhh, yaaassss.

So if you're in the D.C. area, come out to Culpeper to check out some real comedy, as opposed to what goes on elsewhere in places like, say, Congress.

And if you get an early start, you might have time to hear the Great Stalacpipe Organ at Luray Caverns. 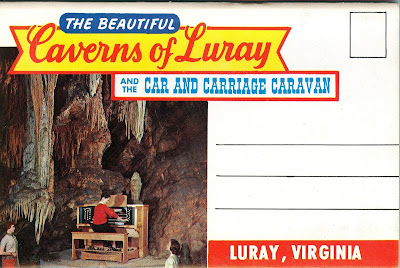