From 'My Friend From India' to two films
starring elephants—hey, is this a theme?

Okay, since getting back from San Francisco on Monday, the music hasn't stopped.

Just the other night (Tuesday, Nov. 10), I accompanied a screening of 'My Friend from India,' an obscure 1927 comedy starring Franklin Pangborn.

The show was part of a monthly series at the Manchester (N.H.) City Library where I challenge myself to do music for films I've never heard of before.

'My Friend from India' certainly fit that category. I knew of Franklin Pangborn from his many character roles later on. But I had no idea he's had "leading man" status, if only briefly, in earlier days—and in what turned out to be a farce comedy, no less.

We had about 30 people on hand and reaction was muted but steady—not exactly a sensational rediscovery, but worth putting on the screen to find out.

Me, I thought it was surprisingly enjoyable, although I'm not expecting a big Pangborn resurgence to occur anytime soon.

India, by the way, is home to elephants. And next up is a program devoted to them. 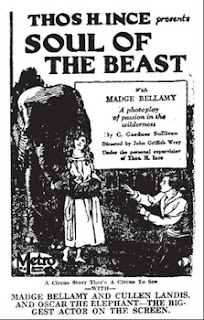 First up is 'Soul of the Beast' (1923), a melodrama starring the gorgeous Madge Bellamy, ham actor Noah Beery, a cast of dozens, and "Oscar" the Elephant in his one big screen role.

This is hands-down the silliest silent film I've ever encountered, and I'm really looking forward to experiencing it with audience reaction.

Hope they're not selling old fruit and vegetables at the concession stand in the lobby!

I discovered this title when planning out an "animal" series two summers ago at the Wilton (N.H.) Town Hall Theatre. It was a hit, although definitely of the "so bad it's good" school of entertainment.

I won't say anything else, other than to point out that the recent trend in "cringe-inducing" comedy has nothing on 'Soul of the Beast.'

But then we straighten out and fly right with 'Chang' (1927), a superb film shot on location in the jungles of Siam, which nowadays goes by the name of Thailand.

This semi-documentary (in which elephants play a leading role) includes absorbing footage of local village life in that part of the world.

It's all woven together to tell one family's story of survival in the wilderness, and was good enough to get nominated in the now-discontinued category of "Unique and Artistic Production" at the first-ever Academy Awards ceremony. (It lost to F.W. Murnau's 'Sunrise.')

But filmmakers Merian C. Cooper and Ernest B. Schoedsack were winners in the sense that they wrested a film from the jungle that showed the potential for the movies to take audiences to places they would otherwise never see in person.

I hope to see you in person at tonight's screening. And bring some peanuts to feed the elephants!

Below is the text of a press release about both films. 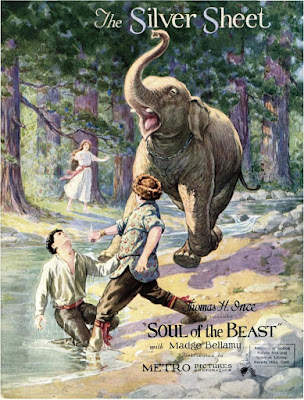 This color layout is a lot more compelling than anything that happens on screen in 'Soul of the Beast.'

Pachyderm-themed double feature: 'Soul of the Beast' and 'Chang' with live music on Thursday, Nov. 12

PLYMOUTH, N.H. — They couldn't speak, but that was no handicap in the silent film era.

They were the great animal stars of early Hollywood: dogs, horses, and even elephants, who were as popular as any human performer when the movies were young.

See for yourself how animal stars helped establish the popularity of motion pictures as the Flying Monkey Moviehouse and Performance Center screens a double feature of two silent films featuring early Hollywood's biggest stars of all—enormous elephants in leading roles.

Both films give performing pachyderms ample opportunity to display their dramatic range on camera.

'Soul of the Beast' (1923) stars Oscar the Elephant, who accompanies a circus runaway fleeing her mean stepfather. Together, they astonish the rustic inhabitants of rural Quebec. 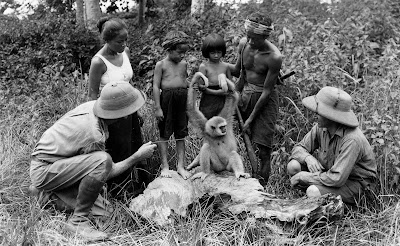 A photo taken during the shooting of 'Chang' (1927). No one in pith helmets actually appears on screen.

In 'Chang, A Drama of the Wilderness' (1927), shot on location in rural Siam (now Thailand), a native family in the back country battles the jungle for survival.

Chang includes an abundance of footage captured documentary-style by the filmmakers on location in the jungles of Southeast Asia.

The film was nominated for the Academy Award for Unique and Artistic Production at the first Academy Awards in 1929, the only year when that award was presented.

Live music for both screenings will be performed by silent film accompanist Jeff Rapsis.

Rapsis will improvise the music, creating it live as each film is running.

"When the score gets made up on the spot, it creates a special energy that's an important part of the silent film experience," said Rapsis, who uses a digital synthesizer to recreate the texture of a full orchestra for the accompaniment."

Rapsis acknowledged that audiences may be surprised to learn that elephants could play leading roles in early pictures. But movies starring animals of all types were a staple of early Hollywood.

"At their heart, these pictures capitalized on people's love of animals to produce great entertainment," Rapsis said. "They still work, and really do come to life when shown in a theater with live music and an audience."

"Also, because of the passage of time, they're perhaps even more interesting today than they were when first released," Rapsis said.