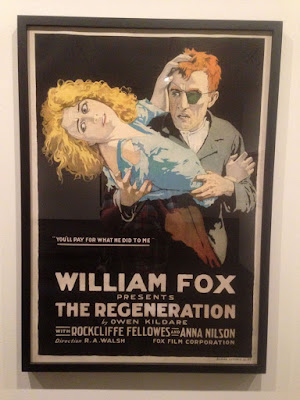 A poster for 'Regeneration' (1915), which I'm accompanying on Saturday, Nov. 7 at the Niles Essanay Silent Film Museum in Fremont, Calif.

Okay, with Halloween 2015 in the books, it's time to shake the cobwebs off my boots and see the world! (With apologies to Jimmy Stewart as George Bailey in 'It's a Wonderful Life.')

In the next few weeks, I'll be accompanying silent film screenings in several far-flung locations.

Before listing the details, let me say thanks in advance to everyone at all these venues.

People have been very generous in their encouragement of what I do, in the form of providing opportunities to create music for silent film screenings in so many different places.

To mention just a few names: Dorothy Bradley of the Niles Essanay Silent Film Museum, Rob Stone of the Library of Congress Packard Center, Maggie Perrino at the Carnegie Center in Cincinnati, John Ewing at the Cleveland Cinematheque, and Alicia Fletcher at the Revue Cinema in Toronto, Canada. 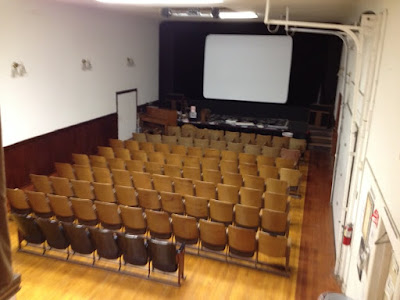 The interior of the Niles screening room, which looks very much as it would have when it was opened as an Edison Theater in 1913.

I'm humbled by this support. I'm also thrilled because sitting in the dark and making music to moving images has emerged as a way for me to keep my sanity. I'm a junkie and I need my fix.

Actually, It's my public creative outlet and now my compulsion, and at this point (more than 100 shows this year) I don't know what I'd do without it.

I sometimes think of silent film accompaniment a "wellness activity." It really should be covered by Blue Cross/Blue Shield.

So to all who've invited me to perform—thank you! In addition to giving me a chance to practice this unusual craft, you're saving me thousands on therapy.

Okay, about the upcoming shows...

I didn't actually plan this out. The long-distance screenings (outside my New England base) just sort of piled up one after another.

But now I look at the calendar to find myself heading out all over the place. And I think of back to high school when I felt studying music wasn't the right plan for me.

I never dreamed that one day I'd be traveling the country making music this way.

The fun begins this weekend in the San Francisco area:

• Saturday, Nov. 7, 7:30 p.m.: 'Regeneration' (1915) starring Rockcliffe Fellowes and Anna Q. Nilsson; the Edison Theatre at the Niles Essanay Silent Film Museum, 37417 Niles Boulevard, Niles, Calif. A gem of a film directed by Raoul Walsh near the start of his career depicting the grim life of the streets in New York City. Early feature-length Fox drama thought lost for many years but rediscovered in the 1970s. Wonderful vintage Edison theater from 1913 now fully restored; shows silent films with live music every week. Suggested admission $5 per person for members, $7 for "not yet members."

And then the weekend after that, I'm down at the Packard Theater in Culpeper, Va. for a double-bill of W.C. Fields, part of a Fields retrospective being run by the Library of Congress:

In 'Running Wild,' meek Elmer Finch (W.C. Fields), browbeaten both at home and at work, volunteers to subject himself to a vaudeville hypnotist. While under the mesmerizing spell, his personality undergoes a dramatic and aggressive transformation.

In 'So's Your Old Man' (1926), Fields plays inventor Samuel Bisbee, who is considered a vulgarian by the town's elite. His road to financial success takes many hilarious detours. Free and open to the public, but children 12 younger must be accompanied by an adult. Open seating is on a “first come, first served” basis.

After Thanksgiving comes my first-ever bona fide "tour." I drive out to Cincinnati for a program at the Carnegie Center in Covington, Kentucky (just across the Ohio River from Cincinnati), then bomb up to Cleveland for two days of screenings at the Cleveland Cinematheque. The next day, it's my international debut at Toronto's Revue Cinema.

• Thursday, Dec. 10, 7:30 p.m., 'Holiday Silent Film Program'; Silent film program at The Carnegie Visual and Performing Arts Center, 1028 Scott Boulevard, Covington, Kentucky. (859) 491-2030; www.thecarnegie.com. On the program: a selection of short films, and then the great Mary Pickford feature 'Tess of the Storm Country' (1922), which has an ending that's perfect for the holidays.

• Sunday, Dec. 13, 4 p.m., 'Woman in the Moon' (1929) directed by Fritz Lang; The Revue Cinema, 400 Roncesvalles Ave, Toronto, ON M6R 2M9, Canada; (416) 531-9950; http://revuecinema.ca/ A grand sci-fi adventure about the first rocket ship to the moon. The rarely-screened final silent feature from German filmmaker Fritz Lang (director of 'Metropolis'), 'Woman in the Moon' laid the groundwork for all of the great outer space movie tales to come, complete with melodramatic plot and eye-popping visuals. And, in a surprisingly contemporary twist, the moon rocket is built and launched not by a government, but by private entrepreneurs! Ponder a vision of the future as imagined by one of yesterday's great moviemakers. (Note: the abridged version, not the full-length film.)

And after that, I drive back home to continue to procrastinate about holiday cards and shopping.