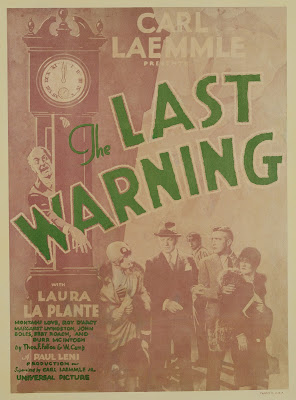 This Sunday, I get a special treat — a chance to do music for a highly regarded silent film I've never accompanied before.

The film: 'The Last Warning' (1928), a late silent thriller for Universal and the last picture completed by director Paul Leni before his untimely death.

It's a bigger occasion than most, as Leni's two other surviving films are masterpieces of visual design that influenced horror films to come.

Leni's 'The Cat and the Canary' (1927) was the original "bunch of people who stay overnight in a creepy mansion while a maniac is on the loose" picture, while 'The Man Who Laughs' (1928) brought the Victor Hugo novel to the screen in memorable fashion with Conrad Veidt in the title role.

So what about 'The Last Warning?' Like many pictures at the time, it was released in more than one version: one completely silent one for theaters not equipped for soundtracks, and another with recorded music and sound effects. 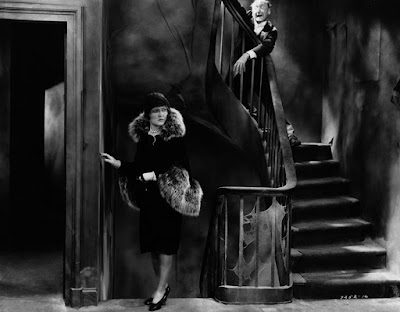 Only the silent version survived, but for many years prints weren't available to be screened or seen. You could get "copy of a copy of a copy" versions of 'The Last Warning' that floated around. But a restored first generation version simply didn't exist.

That is, until a few years ago, until Universal collected the best surviving material, which was held by the Cinémathèque Française and the UCLA Film & Television Archive.

And 2016, 'The Last Warning' was released on DVD and BluRay for modern audiences to appreciate.

And I have to say: the magnanimous move on the part of Universal almost makes up for the studio's recent demolition of the long-standing "theater" set built in 1925 for 'The Phantom of the Opera.'

The massive set, used by many other pictures over the decades, was torn down a few years ago to expand parking for the Universal Studios tour. (Boooooo!)

For more info about this Sunday's screening, check out the press release below! 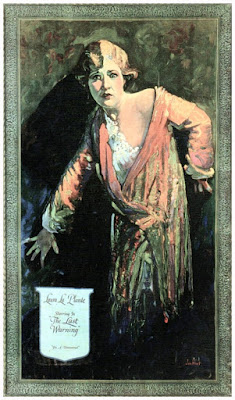 Another less-than-compelling promotional effort for 'The Last Warning.' Don't say you weren't warned!

Wilton moviehouse to screen 'The Last Warning' (1928) with live music; whodunnit filmed on 'Phantom of the Opera' set

WILTON, N.H.—It's a murder committed in full view of a Broadway audience. And the culprit can only be identified by literally re-enacting the crime—on the same stage it happened.

'The Last Warning' stars  Laura La Plante, Montagu Love, and Margaret Livingston. The plot follows a New York producer's attempt to re-stage a play five years after one of the original cast members was murdered.

'The Last Warning' was the final film directed by Paul Leni, a German expressionist director who came to Hollywood in the late 1920s to work for Universal Pictures.

At Universal, Leni directed several innovative films, including 'The Cat and the Canary' (1927) and 'The Man Who Laughs' (1928), both of which created the creepy visual style that would prevail in Universal horror classics such as 'Frankenstein' (1931) and 'Dracula' (1931).

In 'The Last Warning,' Leni employs unusual camera angles and extreme lighting to create a sinister and unnerving atmosphere. The film was made using the massive theater set left over from Universal's megahit 'The Phantom of the Opera' (1925). 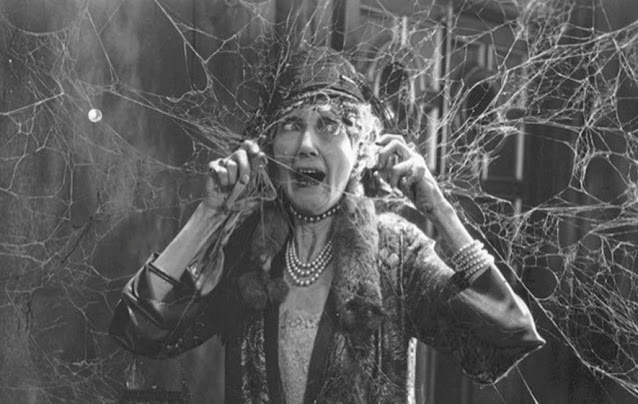 Oh, what a tangled web we weave — from 'The Last Warning.'

Before he could continue his promising career, however, Leni died of sepsis brought on by an untreated tooth infection only eight months after 'The Last Warning' was released. He was 44.

'The Last Warning' was successful enough at the box office to inspire a remake, 'The House of Fear' (1939).

Produced during Hollywood's transition from silent to talking pictures, 'The Last Warning' was released in two versions: one completely silent, and another with recorded music and sound effects for theaters that could play them.

Only the silent version of 'The Last Warning' survives intact. Long unavailable, the film was restored and reissued in 2016 by Universal.

Critics today find much to admire in Leni's films, which pushed the boundaries of what was possible in commercial cinema.

About 'The Last Warning,' film historian Graham Petrie wrote in 2002 that Leni and cinematographer Hal Mohr "handle the camera with the utmost possible freedom, culminating in a scene in which the camera swings on a rope with the villain from one part of the theater to another.

"Along the way, Leni revels in the shadows, cobwebs, tilted angles, subtly distorted perspectives, ominously confined spaces, and clutching hands that had by now become his trademark," Petrie wrote.

In 2021, critic Ralph McLean wrote in the Irish Times that "La Plante may be the star name on the posters but it's Leni's skill that draws you in here. ... Leni's camera never stops moving, offering cutaways and inventive trick shots at every opportunity. We see endless furtive close-ups of possible suspects and witness cast members fade into the surroundings of the darkened theatre setting with remorseless regularity."

Accompanist Jeff Rapsis will create a musical score for 'The Last Warning' live during the screening, in the manner of theater organists during the heyday of silent cinema.

"For most silent films, including 'The Last Warning,' there was never any sheet music and no official score," Rapsis said. "So creating original music on the spot to help the film's impact is all part of the experience of silent cinema."

"That's one of the special qualities of silent cinema," Rapsis said. "Although the film itself may be nearly a century old, each screening is a unique experience — a combination of the movie, the music, and the audience reaction."