Meet the 'Man with the Million Dollar Smile' on Sunday, 4/11 at Town Hall Theater, Wilton, N.H. 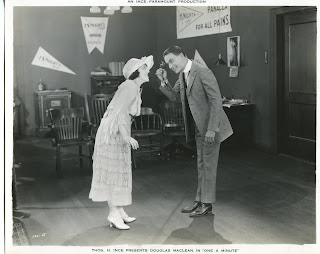 Douglas MacLean works on that million dollar smile in 'One A Minute' (1921).

It's a great privilege to create music for the great classic silent comedies that audiences like to see again and again.

But it's also fun to venture off and poke around the enormous quantity of lesser-known material that's out there in silent film land.

And that's what we'll do on Sunday, April 11, when I accompany a double feature of comedies starring the "Man With The Million Dollar Smile," Mr. Douglas MacLean.

Well, if you haven't heard of him, you're not alone. MacLean, a popular performer a century ago, is today no longer exactly on the tip of anyone's tongue.

But this weekend, for one afternoon at the Town Hall Theater, he'll be back on the big screen, thanks in large part to my silent film accompaniment colleague Ben Model and our friends at the Library of Congress.

The Library of Congress has several of MacLean's titles preserved via 35mm prints in their archives. (Now that's a use of my tax dollars worth supporting!) But preserving the prints doesn't mean showing them, and that's where Ben came in.

A few years ago, Ben launched a Kickstarter campaign to have two MacLean films scanned to digital media and, for the first time in 100 years, make them available to the viewing public. 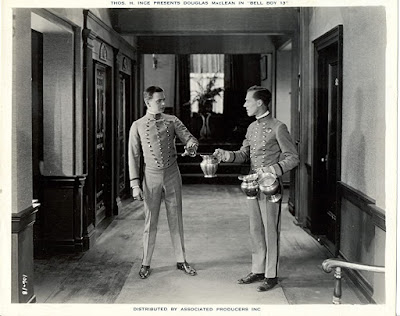 The campaign was successful; as a result, two of MacLean's features, 'One a Minute' (1921) and 'Bell Boy 13' (1923), are featured on "The Douglas MacLean Collection," a DVD produced by Ben's Undercrank Productions label.

And so we're able to present a pair of Mr. MacLean's films they way they were made to be shown: in a theater, on the big screen, with live music, and—most importantly—with an audience.

And that's where you come in. (Besides through the lobby, that is.)

I've actually done one of the films before: I accompanied 'Bell Boy 13' when a 16mm print of it was shown about 10 years ago at the Cinefest vintage film convention in Syracuse, N.Y.

I recall it got a strong reaction. So we may be in for a treat on Sunday. As I've learned from poking around the odd corners of silent film, just because a film is forgotten doesn't mean it's no good.

And if nothing else, the visual quality of 'One a Minute' is stunning. As I say in the press release (below), it looks like it was filmed yesterday.

So it's a great chance to see the kind of on-screen quality that audiences of the 1920s expected. They wouldn't have been satisfied with scratchy recopied prints. And neither should the cinema of that period be judged that way.

More info in the press release below. It went out a bit late (like just now), so please make an extra effort to join us for this one. Do it for Doug! Wherever he is now, let's give him a reason to show that Million Dollar Smile once again. 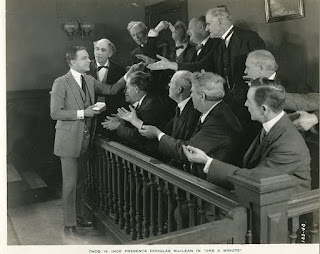 Rediscover the 'Man with a Million Dollar Smile'

WILTON, N.H.—His fans never heard his voice. But he still made them laugh throughout his 1920s heyday.

He was Douglas MacLean, a silent film comedian who charmed audiences with his "million dollar smile" a century ago, when the movies were a brand new form of entertainment.

MacLean, almost entirely forgotten today, returns to the silver screen with a rare showing of two of his most popular comedies, to be shown with live music on Sunday, April 11 at 2 p.m. at the Town Hall Theatre, 40 Main St., Wilton, N.H. 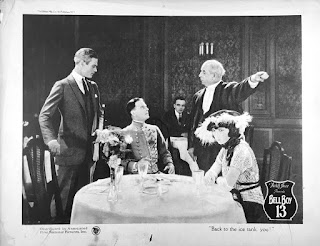 From 1922 to 1929, MacLean starred in 14 other features for Paramount and First National, all maintaining the standard light romantic comedy formula that continued to prove successful for him.

During his film career, MacLean was often billed as "The Man With the Million Dollar Smile." He frequently played energetic and industrious young men, very much like his contemporary Douglas Fairbanks Sr.

'One a Minute' (1921), a satire on the patent medicine business, finds drug store owner MacLean unexpectedly inventing a cure-all for virtually every malady known to man, with unexpected results.

In 'Bell Boy 13' (1923), MacLean plays a promising college graduate ready to marry over his rich uncle's objections, but forced to take a menial job in hotel after being disinherited.

Preserved by the Library of Congress, both films were recently made available for public viewing by silent film accompanist and historian Ben Model via Undercrank Productions.

MacLean retired from acting in 1929, at the end of the silent era. He later worked behind the scenes in Hollywood as a writer and producer, dying in 1967 at age 77.
"MacLean's films are rarely shown today, but this is a chance to see his work as it was meant to be seen: in a theater, with live music, and an audience," said accompanist Jeff Rapsis, who will improvise musical scores for both MacLean features.
" 'One a Minute' is particularly interesting because it shows what the consumer drug business was like a century ago, and also because the surviving print is in a remarkable state of preservation," Rapsis said. "It looks like it was filmed yesterday."
The goal of Sunday's rare screenings is to see if MacLean's work still holds up.
"You really can't tell how good a silent film is until you put it up on the screen with an audience," Rapsis said. "So in a sense, we'll all be collaborators in bringing MacLean's work back to life."
'One a Minute' (1921) and 'Bell Boy 13' (1923) starring Douglas MacLean will be screened with live music on Sunday, April 11 at 2 p.m. at the Town Hall Theatre, 40 Main St., Wilton, N.H. Free admission; a donation of $10 per person is suggested to support the Town Hall Theatre's silent film series.