Escape to Houdini's 'The Man From Beyond' in Greenfield, Mass. on Saturday, Feb. 5 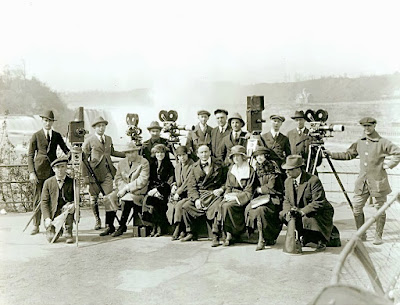 Houdini and crew shooting 'The Man From Beyond' (1922) at Niagara Falls.

Today's riddle: What happens when you program a 100-year-old silent film starring legendary illusionist and escape artist Harry Houdini in a theater that once employed a young man who idolized Houdini and would go on to become one of today's most acclaimed magicians?

The answer, of course, is that you get a video promo from Penn Jillette, the talking half of "Penn & Teller" and native of Greenfield, Mass., where he once worked at the Garden Cinema, which is showing 'The Man From Beyond' (1922) starring Harry Houdini, with live music by me.

The screening is tonight: Saturday, Feb. 5 at 6 p.m. at the Garden Cinemas, 361 Main St., Greenfield, Mass. More info and details are in the press release below. 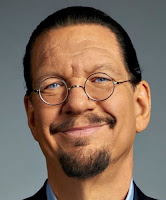 And yes, Penn Gillette, a Greenfield native, did once work at the Garden Cinemas as a teenager, and did have a thing for Harry Houdini even way back then, which led to a long and illustrious career.

The Garden is running 'The Man From Beyond' in honor of the 100th anniversary of the Greenfield Winter Carnival. So yes, it seemed appropriate to run a film featuring a man (Houdini) frozen in ice for 100 years.

And it just happens to be the film's 100th anniversary. So lots to celebrate!

If you're in the area, I invite you to attend this rare screening of Harry Houdini's 'The Man From Beyond' at the venerable Garden Cinemas in downtown Greenfield, Mass.

And if you'd like to see it, here's the Penn Jillette promo. Enjoy!

Although for a silent film, wouldn't it have been more appropriate for it to be pitched by the usually mute partner Teller? 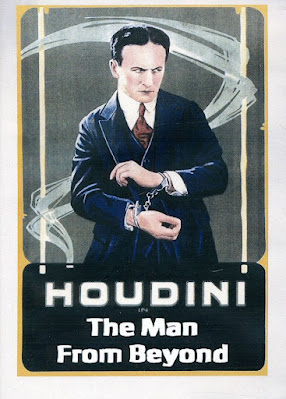 GREENFIELD, Mass.—He reigned for decades as the legendary "Handcuff King," famous for daring escape stunts staged around the world.

But Harry Houdini also had a brief movie career, starring in a series of silent adventure films that showed off his talent for illusion and escape.

The century-old film, in which Houdini plays an Arctic explorer frozen for 100 years and then thawed out, is being shown in honor of Greenfield's annual Winter Carnival, which runs Feb. 4-6.

“This was the perfect film to feature for Greenfield’s 100th Winter Carnival” said Garden Cinemas owner Isaac Mass. “It was the 'Frozen' of 1922.”

The rarely screened film will be shown with live musical accompaniment by Jeff Rapsis, a New Hampshire-based performer regarded as one of the nation's leading silent film musicians.

It's the third time Rapsis has been to the Garden Cinemas.

“His performances are quickly becoming a fan favorite.” Mass said. “It turns out silent film is pretty noisy and the crowd just loves to engage.”

But enough escaped oblivion to provide a glimpse of the world-renowned escape artist at the peak of his worldwide fame.

The ‘Man From Beyond’ took six months to produce, unheard-of in 1922, and was the first film made by Houdini’s own production company. 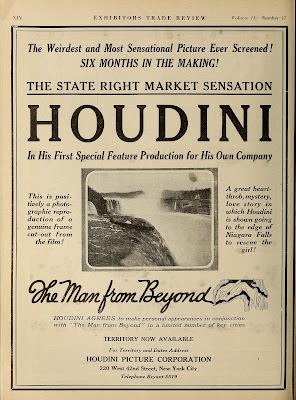 In 'The Man From Beyond' (1922), Houdini plays a man frozen 100 years in the Arctic who returns to civilization to reclaim his reincarnated love.

Once he's thawed out, Houdini tries to straighten out the lives of the descendants of his old friends and lost loves. The film includes a daring climax filmed at Niagara Falls.

He first attracted notice in vaudeville in the U.S. and then as "Harry Handcuff Houdini" on a tour of Europe, where he challenged police forces to keep him locked up.

Soon he extended his repertoire to include chains, ropes slung from skyscrapers, straitjackets under water, and having to escape from and hold his breath inside a sealed milk can with water in it.

As a member of the Scientific American Committee, he offered a large cash prize to any medium that could demonstrate supernatural abilities. The prize was never collected.

“He truly was one of the original Ghostbusters," Mass explained.

Houdini died prematurely in 1926, at age 52, of peritonitis following a burst appendix that may have been caused by blows received to the abdomen by a visitor backstage at a performance in Montreal.

Following his death, Houdini's reputation as a legendary performer continued to make his name a household world in the decades that followed. 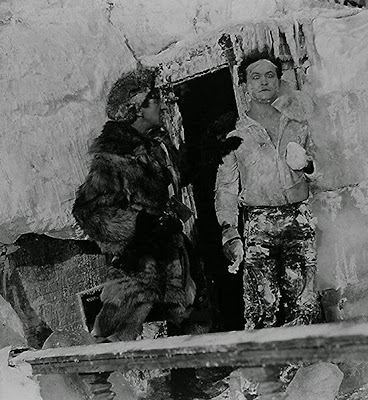 Houdini (right) after being chopped from a century's worth of ice.

Although not well known as a film actor, Houdini's work in motion pictures was not forgotten. In a posthumous ceremony on Oct. 31, 1975, Houdini was given a star on the Hollywood Walk of Fame at 7001 Hollywood Blvd.

Houdini’s star is near that of Greenfield native magician and movie star Penn Jillette, which was dedicated in 2013.