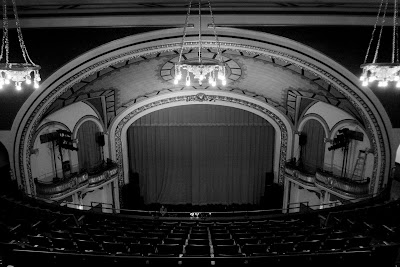 A view of Somerville Theatre's "House 1" from the projection booth. It took 400 feet of cabling to reach from the stage to here.

Ten days to go before Halloween and the silent film calendar is as packed as a trick-or-treater's bag after two hours of ringing doorbells.

Today (Sunday, Oct. 21) marked my return to the wonderful Somerville Theatre in Davis Square in Somerville, Mass., just outside Boston and really part of the city. We ran 'Phantom of the Opera' (1925), and it was a memorable experience on several counts...

1. Sound: With the help of projectionist David Kornfeld, 400 feet of XLR cable, and a roll of gaffer's tape, we were able to patch my keyboard into the Somerville's booming house sound system. What a step up from my 2011 appearances, when we had to make do with my relatively small Roland speakers.

2. Picture: The tinted 35mm print, on loan from preservation guru David Shepard, was a real treat to see on the big screen. Projectionist David Kornfeld pushes his lamps higher than spec, and I think that helped 'Phantom' pop off the screen.

3. Audience: About 160 people were on hand for the screening, a healthy turnout considering that the Patriots were playing the Jets this afternoon. And they reacted quite energetically to the on-screen action, which is one of the great rewards of doing this.

The local media in Boston are very film-friendly, and so the screening was listed all over, which was great. One amusing twist came from the Boston Phoenix, the local alterative weekly publication, which described the film in this week's issue as "starring Lon Chaney as the tragic bell ringer." Oh, well!

The screening was a hoot, as it's a real thrill to do my stuff in the big city. It was also something of a challenge, as I'm not used to the house and so wasn't confident on volume levels and so on. As I said to David afterwards, it usually takes three screenings for me to settle in with a sound system.

Another unexpected thing (for me) was that the print included footage from the opening that was added for the 1929 sound reissue. However, it was shown silently, which rendered it pretty useless and puzzling. Not exactly the way to start off strong, and I have to say it kinda threw me.

Also, the print had to be run at 24 frames per second, which seemed a little fast to me. The "masked ball" scenes in particular seemed to rush right by, with barely enough time to develop a musical idea or phrase before something else was demanded. Well, such are the perils of live accompaniment.

Doing Phantom again on Thursday, Oct. 25 at the Flying Monkey in Plymouth, N.H., and then once more on Wednesday, Oct. 31 (Halloween night!) at Merrimack College in North Andover, Mass. See the Upcoming Screenings page for more details.

Also coming up: On Sunday, Oct. 28, we're showing a rarely screened German film 'The Hands of Orlac' (1924) at the Wilton Town Hall Theatre in Wilton, N.H. And on Tuesday, Oct. 30, I'm tackling 'The Cabinet of Dr. Caligari' (1920) at the Manchester (N.H.) City Library. Again, more info on the Upcoming Screenings page.