In which I (amazingly enough)
collaborate with Mr. Kevin Brownlow 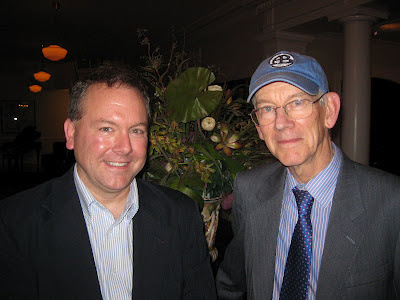 With esteemed filmmaker and historian Kevin Brownlow at the University of Arkansas in Fayetteville, Arkansas.

When in the company of prominent people, I can't seem to resist making wisecracks to show just how clever I am. I think this is just a way of channeling my excitement, but it sometimes leads to aggressively bizarre behavior.

Case in point involving Mr. Kevin Brownlow: I arrived this evening at Giffels Auditorium in advance of his presentation, for which I was to supply live music.

Kevin was already going through the video segments of his lecture; on screen was a portion of his 1980 'Hollywood' documentary about the silent film western, with narration by actor James Mason. So what's the first thing out of my mouth when the distinguished film historian and author notices I'm there?

"Kevin, hi! You know, that guy you have doing the narration does a great James Mason."

He was gracious enough to laugh, and I eventually settled down, probably much to his relief. But yes, that was actually me working with Kevin Brownlow, who presented his "The Wild West and the Reel West" lecture on Monday, Oct. 1 at the University of Arkansas at Fayetteville, Ark.

How did I end up working with Kevin Brownlow in Fayetteville, Arkansas? Chalk it up to good old American know-who. Bill Shaffer of the Kansas Silent Film Festival recommended me to Frank Scheide, a faculty member of the "U of A" Communications Department. Frank and Bill brought Kevin in from London for this year's annual Buster Keaton Festival in Iola, Kansas, and then Frank hosted Kevin for some additional presentations in Fayetteville.

Turns out live music was needed for several segments of Kevin's talk on Monday night in Giffels Auditorium on the university campus, which is where I came in.

It had already been quite a year for me and Mr. Brownlow, who is one of the people in the world I would most like to be if I had to be someone else. (Another person is Q. David Bowers.) In February, I stopped by uninvited at the North London offices of his company, Photoplay Productions, and got to meet Kevin there. In April, my wife and I zipped out to Oakland, Calif. to take in one of the 'Napoleon' (1927) screenings, and exchanged a few words with Kevin there as well.

And now this: a chance to collaborate with Kevin as part of an actual silent film event, if only in a small way. But I was honored to have the opportunity, which for a silent film musician is on par with, say, a high school track wannabe going for a jog with Roger Bannister.

First, however, I had to quell the desire to crack wise. So I held my tongue and watched as Kevin worked through the segments with a tech guy, trying to ensure each looked as good as possible. At one troublesome point, he turned to me and asked "Do you know anything about these things?" and I demurred, saying I was from the "TAE School of Technology," meaning "Trial and Error."

Okay, stop it with the jokes already!

But going through the segments did give me a chance to preview the three sequences I'd be accompanying. One was from 'The Iron Horse' (1924), the great John Ford drama about the building of the transcontinental railroad; the other two were clips from dramas with titles I can't recall right now, but both featured depictions of Native Americans.

I don't know why these were "mute" (without recorded music), but the dramatic situations were clear enough, even out of context, so I felt ready for the high-wire improv act to begin. Kevin's one request was that I use the theme from "Stagecoach," which I didn't know offhand but was able to mimic from Kevin singing the melody.

But then there was the piano. Giffels Auditorium is graced by an enormous Steinway concert grand, but it lives on the stage behind the screen used for audio-visual presentations. So we had to make do with positioning it as far downstage as possible, on the very lip of stage right, which gave me a sideways view of the screen, which was better than nothing. This, however, positioned the business end of the piano (the keyboard) offstage, and so I wound up sitting behind a curtain that was fixed in place.

Thus I became the "mystery pianist," which of course wasn't an issue as this was supposed to be about the movies and Kevin's work, after all. Still, it took anonymity to new heights. (I'm told you could see my feet on the pedals.)

Besides actually accompanying the segments, the highlight for me occurred when I began warming up. I wasn't doing anything special, but Kevin and Frank both seemed impressed and pleased. Now it was Kevin's turn to joke, with him asking me to not play anything that was obviously better than the recorded music.

This was very kind of him and put me in a sunny, confident mood. I began improvising on what I could come up for "Stagecoach," just to see what might happen, and was surprised to learn that Kevin was on the other side of the curtain the whole time, going over his notes. He later said some very kind things about my playing, which really, really made my day.

About 100 people turned out for the lecture, mostly students. When the lights went down for the first clip, I was alarmed to find there was much less light on the keyboard than I expected, but it would work. As I said later, "Luckily, most of the keys are white."

All right all ready with the jokes!

One other thing worth noting is that Kevin hadn't had any dinner, and all he had on him was a Polish candy bar, which he didn't seem to want. So prior to the lecture, my wife hustled back to our room at the nearby Inn at Carnal Hall (where we were all staying) and brought back a banana and a protein bar, which got him through the lecture.

So Kevin gave the world an appreciation for silent film, and we gave him snacks. Not exactly an even trade, but it was a really nice banana.

And not to gush any more than I already have, but I must say it was a genuine rush to hear, from my perch behind the curtains, Kevin Brownlow introduce the first sequence from 'The Iron Horse' by saying "...accompanied by Mr. Jeff Rapsis on the piano."

I mean, this is the guy who, more than anyone else, has opened my eyes to the unique expressive power of silent film, especially in live performance, and who has inspired me to recreate it and keep it alive and bring it to others whenever possible.

It was an honor and a thrill for me, as well as a great opportunity to apply the instincts that I've been honing in the five years that I've been working to develop my craft. I hope it was up to the high standards that Kevin Brownlow has so obviously striven for throughout his life's work.

And if there's a next time, I'll be sure to bring an ample supply of bananas, for at the very least Mr. Brownlow deserves a whole bunch.