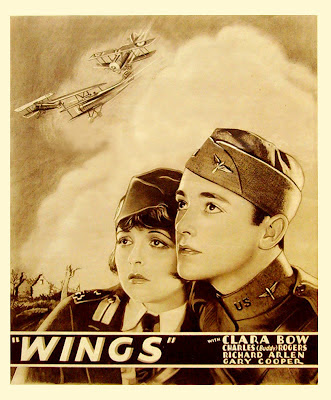 Saturday, Oct. 6 brought me to the picturesque village of Ludlow, Vermont, home of Okemo Mountain ski resort, and where the foliage season is currently nearing its peak. I was on hand for what you might call an "apres-leaf peeping" event—to do live music after sundown for a screening of 'Wings' (1927), the great World War I flying drama.

Ludlow is blessed with a vintage municipal building that still houses much of the local government. Like many such buildings, its upper floors are home to a surprisingly large and high-ceiling auditorium, which over the years has done duty as a theater and a basketball arena, among other functions. (The court markings are still painted on the wooden floors.)

In recent years, the space has been restored and put back in use, primarily due to the efforts of the "Friends of the Ludlow Auditorium," a group of local volunteers dedicated to building up the facility's programming. They've been showing classic movies there, one per month, for some time, but this past August they tried something new—a program of short silent films with live music.

I couldn't be on hand to join in due to prior commitments, but the show was well received, and organizer Ralph Pace agreed to give me a slot to do music for a full-length feature. And so I came to town to accompany 'Wings.'

Below are photos of the stage (with movie screen), and also the seating area. 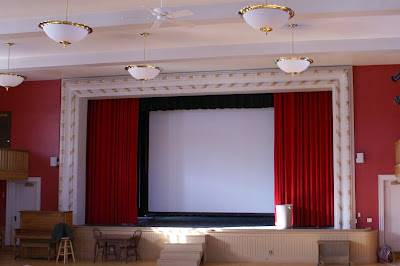 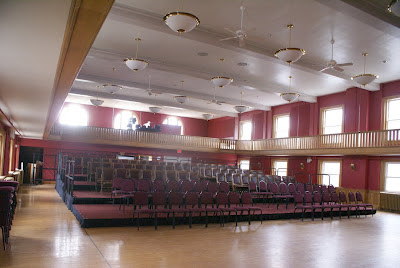 The space is a little unusual in that the seats are arranged on a massive series of risers that cover a good portion of the old wooden gym floor. But the acoustics are great, and it was a thrill to do music for the crowd of about 100 people who showed up.

The only glitch, alas, was that the aspect ratio of the projected image was incorrect, and we couldn't adjust it in time for the 7 p.m. show. So the cast of 'Wings' looked a little taller and thinner than usual. Most people seemed to accept the film as is, and I felt the music came out pretty effectively, so 'Wings' overall made its usual strong impact.

A lively question-and-answer session followed, including some queries about tinting—how appropriate for foliage season! We probably could have continued well into the night if Ralph himself hadn't come down from the projection "booth" (a makeshift area in the balcony) to thank everyone for coming. Even so, some people still stayed to chat further including several who said they forgot the music was live (the ultimate compliment!) and a couple from England who were "on a month's holiday to see your foliage" but said 'Wings' was the highlight of their trip so far. Better than foliage! High praise indeed!

Ralph was pleased enough with the turnout to ask folks if they'd like to see more. Many did, and so we'll see about doing future screening in Ludlow. If you live in the area and have any ideas about silent films to present with live music, please let me know!

In the meantime, if you're eager for more, my next gigi is only about an hour's drive away: a screening of the original 1925 silent version of 'The Phantom of the Opera' starring Lon Chaney, to be shown on Saturday, Oct. 13 at 7 p.m. at Brandon Town Hall on Route 7 in Brandon, Vt. Admission is free. Hope to see you there!