Opening 'The Cabinet of Dr. Caligari'
on Tuesday, Oct. 30 in Manchester, N.H. 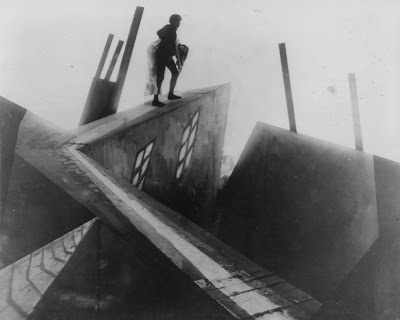 We're in for some scary weather as I write this (Monday, Oct. 29), but as of now it looks like our part of the world will be spared the worst of Hurricane Sandy as it plows into the U.S. East Coast far to the south of here. Just a lot of rain and wind, I think.

So it's all systems go for our screening of 'The Cabinet of Dr. Caligari' (1920) tomorrow night at the Manchester (N.H.) City Library. It's the first time I've done this flick and I'm looking forward to creating music to help bring it to life.

As a kind of warm-up, yesterday we screened 'The Hands of Orlac' (1924), a lesser-known picture from the same director, Robert Wiene. Turnout for the show at the Wilton (N.H.) Town Hall Theatre was a bit light, again because of the impending storm, and also because it's not one of the big "name brand" silent features, I think.

But it sounded creepy enough, so I programmed it and hoped for the best, thinking it might be one of those undiscovered classics that still works well on the big screen and in a theater. Well, the verdict was: nope!

People I talked to afterwards generally felt that the silent 'Hands of Orlac' was one they definitely didn't need to see again. Complaints were that it was too slow (one attendee described it as "maddeningly slow paced"), and also that the plot didn't really make a lot of sense.

Well, we tried! Let's hope 'Cabinet' lives up to its reputation as a picture worth seeing in a theater. We'll find out tomorrow night, unless the storm does hit us hard enough for the city to close the library. I'll update here as needed but for now, the show must go on!

For specifics, here's the text of the press release... 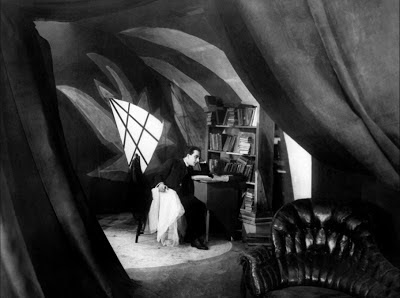 Classic silent horror film to be shown the night before Halloween with live music at public library; free admission

MANCHESTER, N.H.—A creepy silent film regarded as the forerunner of all horror movies will be shown on the night before Halloween in downtown Manchester. 'The Cabinet of Dr. Caligari' (1920) will be screened with live music on Tuesday, Oct. 30 at 6 p.m. at the Manchester City Library, 405 Pine St., Manchester.

The showing of 'The Cabinet of Dr. Caligari' is free and open to the public, with live music by New Hampshire silent film accompanist Jeff Rapsis. The screening takes place in the library's historic Carpenter Auditorium, on the library's lower level.

Set in an insane asylum, 'The Cabinet of Dr. Caligari,' is considered a landmark in early cinema. Nearly a century after its release, the film still has capacity to creep out audiences. "A case can be made that 'Caligari' was the first true horror film, critic Roger Ebert wrote in 2007.

'Caligari,' made in Germany after World War I and directed in expressionist style by Robert Wiene, stars Werner Krauss and Conrad Veidt. The film used stylized sets, with abstract, jagged buildings painted on canvas backdrops and flats. To add to its strange visual design, the actors used an unrealistic technique that exhibited jerky and dancelike movements. The movie is also cited as having introduced the "twist" ending in cinema. 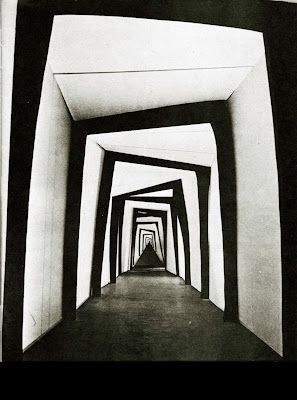 'Caligari,' a forerunner of the 'film noir' genre, has influenced generations of movie-makers. A sequel of sorts was released in the 1980s with the film 'Dr. Caligari,' which dealt with the granddaughter of the original Dr. Caligari and her illegal experiments on her patients in an asylum. Its tone, look, and feel held similarities to the original film, but was more influenced by the works of David Lynch and David Cronenberg than of the German Expressionists.

The screening is the latest in the library's ongoing series of silent film presentations with live music.

"These are the films that first caused people to fall in love with the movies," said Rapsis, a Bedford, N.H. resident. "The aim is to present them as they were originally intended to be shown: in a theater, on a big screen, with live music, and with an audience. If you can put all those elements together, these films leap to life."

Upcoming silent films scheduled at the Manchester City Library include:

• Tuesday, Dec. 4 at 6 p.m. 'The Trail of '98' (1928); outdoorsy silent drama on a grand scale. Fortune hunters from all over the country rush to the Klondike in 1897 to seek gold are tested by hardships of the journey. Directed by Clarence Brown, the film stars Dolores Del Rio, Harry Carey, and Karl Dane. Del Rio's stunts were performed by a young Lou Costello long before he teamed with partner Bud Abbott and achieved comedy fame.

• Tuesday, Jan. 15 at 6 p.m. 'Battling Butler' (1926); silent film funnyman Buster Keaton's rarely screened boxing comedy gives the star a chance to be even more physical than usual. Rich and pampered Buster reluctantly takes up the Sweet Science to impress his girl, leading to knockout comedy both in and outside the ring.

Admission to all screenings are free, with donations accepted to help defray costs.

The next installment in the library's silent film series will be 'The Cabinet of Dr. Caligari' (1920), to be screened on Tuesday, Oct. 30 at 6 p.m. in the Carpenter Auditorium of the Manchester City Library, 405 Pine St., Manchester, N.H. For more information, call (603) 624-6550. For more information about the music, visit www.jeffrapsis.com.