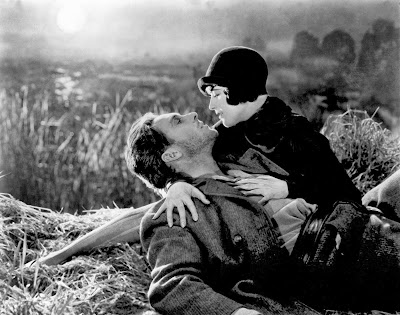 George O'Brien and Margaret Livingston get to know one another in 'Sunrise' (1927).

I've often said it: there's no better film for Valentine's Day than one in which a husband contemplates killing his wife and running off with another woman.

Alas, our Valentine's Day screening of F.W. Murnau's 'Sunrise' (1927), considered by some to be the finest silent film of all, was postponed last month by a snowstorm.

But you can't kill romance, and so the show got rescheduled to Thursday, March 6. Bring your sweetie down to Flying Monkey Moviehouse and Performance Center and take in a flick that's sure to warm you up at least a little, even as the cold weather overstays its welcome in these parts.

Here's the press release with all the details. See you at the theater! 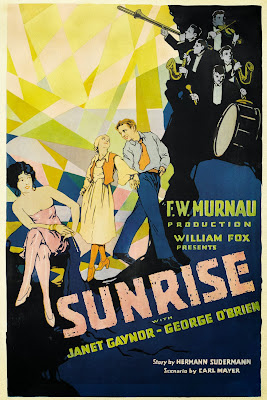 PLYMOUTH, N.H.—Silent film on the big screen with live music returns to the Flying Monkey Moviehouse and Performance Center with the Academy Award-winning romantic drama 'Sunrise' (1927) on Thursday, March 6 at 6:30 p.m. Admission is $10 per person.

The screening of 'Sunrise,' starring Janet Gaynor and George O'Brien, will feature music by silent film composer Jeff Rapsis, who will accompany the film live.

The event, previously scheduled for Valentine's Day, was moved to Thursday, March 6 due to inclement weather.

"It's a great way to follow the annual Academy Awards, which take place the Sunday before," said Rapsis, who creates live original scores for the Flying Monkey's monthly silent film series. "If you've never experienced silent film with live music in a theater, this is a good opportunity to check it out."

Rapsis, who uses original themes to improvise silent film scores, said great silent film dramas such as 'Sunrise' used their lack of dialogue to create stories that concentrated on the "big" emotions such as Love, Despair, Anger, and Joy. Because of this, audiences continue to respond to them in the 21st century, especially if they're presented as intended — with a live auience and live music.

"Dramas such as 'Sunrise' were created to be shown on the big screen as a communal experience," Rapsis said. "With an audience and live music, they still come to life as their creators intended them to. So the Flying Monkey screenings are a great chance to experience films that first caused people to fall in love with the movies," he said.

The Flying Monkey usually shows silent films on the second Thursday of each month. Other upcoming films in the Flying Monkey's silent series include:

• Thursday, April 10, 6:30 p.m.: 'Our Hospitality' (1923). Buster Keaton's classic comedy/drama about a long-running family feud in Appalachia of the 1830s. Filled with great gags and a timeless story that culminates in a dramatic river rescue where Buster almost lost his life for real!