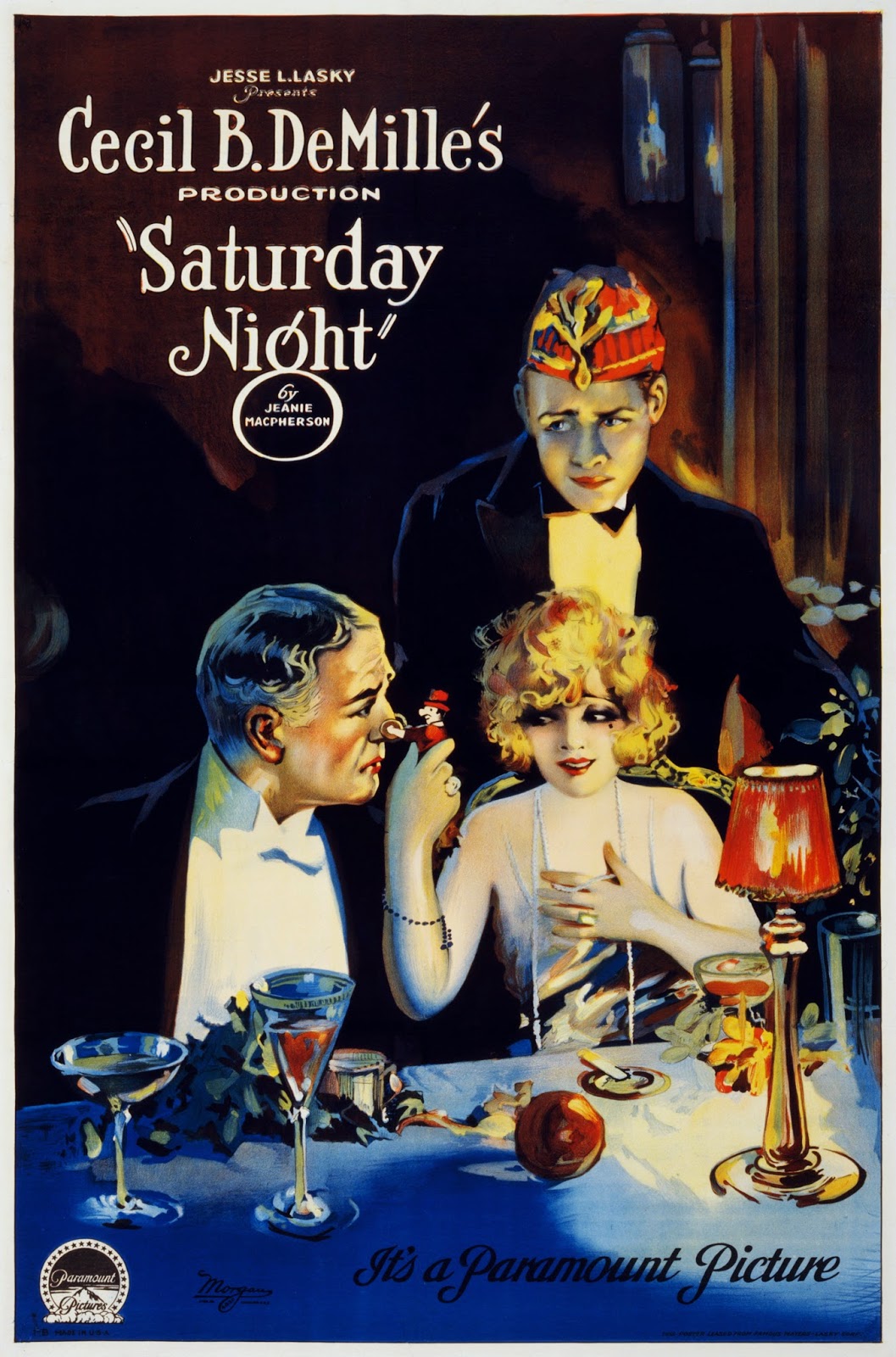 'Saturday Night' (1922), shown on Thursday morning, was the opening silent at this year's Cinefest.

I've just come back from Cinefest in Syracuse. And although I didn't fly, boy are my arms tired!

Well, not really, even though I accompanied six feature films in four days. I just couldn't resist the chance to give new life to humor from another era.

And that captures the spirit of Cinefest, I think: giving life (on screen, anyway) to older motion pictures that otherwise aren't screened anywhere. By "older," I mean features and short films from the silent and early talkie era, up until about World War II.

Some are surprisingly compelling. Others turn out to be real turkeys. But all get a chance to live again, shown as they were intended: on a big screen, with an attentive audience, and with live music for the silent films.

The more I think about it, the more important I realize such events are in terms of understanding the impact that early motion pictures had on the culture of their era. Much of their energy and excitement comes from the effect they produced on an audience, and the people who created them had this in mind all along.

They were never intended to be consumed in private or in solitude, either on a screen in someone's basement or, God help us, on a cell phone.

So the chance to see older pictures, good or bad, with an audience, can be a revelation in that a key element of their original power is restored. To see any motion picture from before World War II without an audience is like standing outside the Louvre Museum in Paris and saying you've experienced the Mona Lisa.

This year's Cinefest, which ran from Thursday, March 13 through Sunday, March 16, 2014, offered a wonderfully mixed grabbag of titles, including a group of a half-dozen Fox talkies from the early 1930s and a bigger-than-normal proportion of silent films.

In fact, the silent schedule was heavy enough for this year's Cinefest to have four accompanists on hand to supply music, rather than the usual three. And that was good news for me, because one of the big attractions of Cinefest is the chance to hear other accompanists ply the trade in live performance for a lot of different films.

This year, my colleagues were Makia Matusmura, a highly regarded New York-based accompanist whom I'd never had the chance to hear before; Judy Rosenberg, a wonderful accompanist from San Francisco whose recorded work I've long admired but whom I also hadn't heard in live performance; and the great Jon Mirsalis, also from the San Francisco area, whose style and approach I think makes him one of the most effective accompanists in the field.

All three turned in multiple memorable performances—in fact, there was so much music and so many movies, at this point I would be hard-pressed single out one moment over another. There was also a richness to the accompaniment in that everyone was able to adapt quite readily to all the different styles and genres of the many silents on the program.

Even accompanist Ben Model was on hand for his "undercranking" presentation, and sat in to play for many of the comedy short subject programs, so I got to hear him in action as well. Five accompanists in one spot must be some kind of record.

I always learn so much, I think, from hearing what other accompanists do and now they approach the task. It's one of the great pleasures of being part of Cinefest these past three years.

As for me, I had some good moments, but also some weak stretches. Compiling a log of what I did might help me tie together what I got out of the experience, so here goes. (Keep in mind that there's no chance to preview these films, so they're played "cold" by the accompanists.)

• Thursday, March 13: 'Saturday Night' (1922): The very first silent feature of this year's Cinefest was this Cecil B. DeMille society comedy/drama that went pretty well. I had good material to accompany the constrasting worlds of the upper and lower class characters, and the story flowed quite naturally, so the music stayed on target, I thought. The best thing about it was that you could see the comedy scenes coming from a mile away, so I was able to get music under them that was pretty effective, I thought. It wasn't hard to capture even small details, such as how the elevated train ran right outside a tenement flat.

• Thursday, March 13: 'Fanchon, the Cricket' (1915): This recently restored early Mary Pickford feature was another effort that held together well, I thought. Unusual in that it was set in a kind of medieval fantasy world, which I tried to match with a light "music box" style of accompaniment that seemed to do the trick.Kind of a weak film in that I found it hard to find much to be sympathetic about in Mary's character or situation, but I did my best to "cast a spell" and help put the film over. 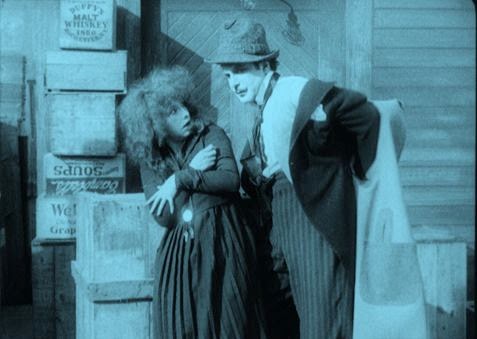 • Friday, March 14: 'For the Defense' (1916): This early Paramount drama was perhaps my favorite of those I accompanied, in that it was totally unknown to me, but somehow I felt in synch with it right from the start. The material I chose seemed to fit well, I could follow the story with ease, and I paced it right so that the last 20 minutes of the film seemed to be very effective. No less a person than film preservation guru David Shepard said I did a good job "heightening the dramatic tension" of the film's climax. High praise indeed! It also won the award for the best intertitle of the festival: "I have to tell you ..... I murdered a man.... and I love you."

• Friday, March 14: 'Buck Privates' (1928): No, not the Abbott and Costello film, but a silent World War I army comedy about doughboys in Europe. I tried to keep it light, which was the right approach, but somehow the material I had didn't seem to help the film jell. (The fact that the film started just before midnight might have been a factor.) However, a frantic chase finale came as a nice surprise, allowing me to kick the material I'd been using into high velocity mode. Too bad so few attendees were on hand for it! But this served as a great example to me of how comedy is harder to do effectively. A chance to see this beforehand would have really helped with the pacing, as the humor was not as easily discerned on sight as in, say, 'Saturday Night.'

• Saturday, March 15: 'The Live Wire' (1925): This Johnny Hines comedy should have been a highlight of the festival, but it produced only sparse reaction, I think in part because the material I chose just wasn't a great fit for the film, and also I couldn't seem to get in synch with the film's spirit. Because of this, I began pushing tempos too soon, further confusing things and leaving me with nowhere to go when the climax finally did play out. Leonard Maltin, sitting right behind me for the screening, commented afterwards that I had "set quite a pace for myself" on that one. Definitely my weakest entry, I felt, and not helped by two cups of wine I had earlier in the evening. :)

• Sunday, March 16: 'The Devil Horse' (1926): I considered this action-packed Western drama starring Rex the Wonder Horse my grand finale, and so got permission to hook up the digital synthesizer and speakers to go all out. Everyone seemed really impressed, if only because the palette of the full orchestra (including big percussion, appropriate for a horse opera full of scenes of "injuns" on the warpath) was undoubtedly a constrast to the piano texture that is otherwise the soundtrack for silents at Cinefest. However, like 'The Live Wire,' I felt out of synch with this one as well, and found myself playing too much too soon. All went okay, however, despite a blown projection bulb during the climactic battle to save the fort. I pushed forward in the darkness, playing underscoring that vamped us until the movie started up again—now tinted pink because the new bulb hadn't warmed up yet!

What did I learn? Take your time. Resist the temptation to overplay. And don't drink wine prior to accompanying. A continuous line of melody can be better than abrupt transitions. Matching the right material is important, so don't be afraid to abandon music that's not working and go with something else. Avoid AUI, or Accompanying Under the Influence.

Cinefest follows a pattern of inviting accompanists for a three-year commitment on a rotating basis. And because this was my third year, 'The Devil Horse' really was the grand finale of my involvement for now, at least as an accompanist. It's been a great experience, as I've learned a lot and made contacts that will help me continue to pursue this unusual craft.

So I want to thank everyone associated with this grand affair for the chance to contribute music and get to know some wonderful people. Thanks especially to Joe Yranski for first inviting me as an accompanist, and to organizers Rick Scheckman and Gerry Orlando for all they do it getting the films programmed and the festival planned, and also to the projection and house crew in the theater who make it easy to concentrate on the music alone—something that's quite a luxury for me. :)

And now...looking ahead! A screening of 'The Lost World' (1925) will take place on Thursday, March 20 at 6:30 p.m. at the Flying Monkey Moviehouse and Performance Center in Plymouth, N.H. Tickets are $10 and hoping for a good crowd to be on hand for this grandpappy of all dinosaur movies.

I've been so busy that I haven't had a chance to get out a press release on this one, which is a shame, because I think it has a natural audience, given the enduring popularity of our prehistoric friends. Still, hope to see you there!