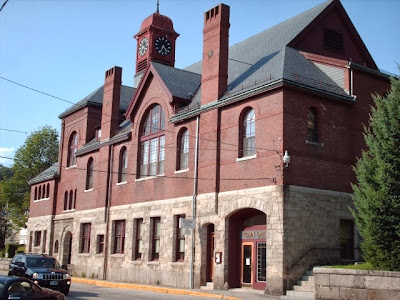 I'm pleased to report that yesterday's screening of 'Wings' (1927) at the Wilton (N.H.) Town Hall Theatre raised more than $3,000 towards the facility's conversion to digital for first-run movies.

I want to thank the generosity of silent film fans who turned out for this $20-per-ticket event, many of whom made additional donations to the theater yesterday.

The Wilton Town Hall Theatre is one of the great things about living in our part of the world. It's also where I got my start accompanying silent films live in front of an audience, and I still consider it my "home base" with the monthly screenings I continue to do there.

So I was really pleased to see such a great response to this fund-raiser. Many familiar faces, and some new folks as well, and a lot of kind comments after the show.

Ironically, we showed 'Wings' in the same theater where '12 Years a Slave' is currently playing. So on Sunday, movie-goers in Wilton had a choice between the very first and the most recent Best Picture. That can't happen very often.

The screening of 'Wings' also served as a kind of "final exam" prior to heading off to Syracuse, N.Y. later this week for Cinefest, a four-day annual gathering of vintage film buffs. As part of the festivities, silent and early sound movies are screened pretty much continuously each day from 9 a.m. until after midnight. (No, they're not totally crazy. On Sunday, they stop about 6 p.m.)

That's so much film that they actually bring in no less than three accompanists to handle the music. Pianists are generally given a three-year stint, and this time marks my third (and final) year in the rotation. 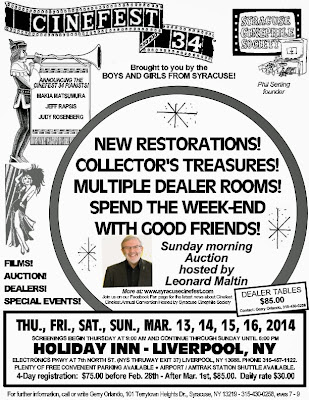 I love going there, but I'll be honest: for me, it's a fairly challenging event because I'm playing alongside the likes of Phil Carli, Jon Mirsalis, Andrew Simpson, and other terrific accompanists with long-established national reputations.

This year, my co-conspirators at the keyboard are Makia Matusmura and Judy Rosenberg, both fantastic accompanists that I'm looking forward to meeting and hearing. And I understsand Ben Model and Jon Mirsalis will be coming in for some things as well, too.

Each time I go, I'm thrilled (and amazed) to hear what these other accompanists can do. I'm also forced to consider my own way of accompanying, which is good, because it inspires me to continue to try to improve my craft. So that means everything from Hanon technical exercises (the classic piano player's finger-training exercises) to working through chord progressions that I can file away for future use, and also making a concious effort to make full use of all 88 keys. (Sometimes I seem to forget about the upper third of a piano keyboard.)

Another challenge is mastering the considerable difference between an acoustic piano (such as that used at Cinefest) and the Korg digital synthesizer I often use in my own shows. Though the keyboard itself might look the same, each requires a whole different style of playing.

Well, I do work at it, but there's only so far that work (and any natural talent) can get you. And in recent months, I've become increasingly comfortable with a sense that my own strength as an accompanist lies not in flying all over the keyboard, but with keeping things small and in control, and using that to maximize an audience's experience of the film. Use the tools you have.

I may never be Vladimir Horowitz, but I do have a definite sense of drama and a good feel of how music can augment many different types of cinematic story-telling. (Comedy, yes, is still the toughest to pull off effectively.) I may not have the ability to rattle off, say, a Chopin polonaise at will. But I'm not likely to go off on a showy tangent when accompanying a film. All I seem to be able to do is organic film music that's not intended to be anything else.

And Phil Carli himself, one of the most impressive keyboard players I've ever witnessed, has said that one of the cardinal sins of accompaniment is "overplaying," or trying to play beyond one's ability. It's a tendency I notice in myself, because I do get carried away by a film, and also with trying to do what other accompanists sometimes do. It's a basic human motivation: peer pressure. Hey, I want to be like them!

And this feeds a cycle where I tend to push too hard too soon, which sometimes can lead to overplaying, which is when things are most likely to fall apart. Worse, it give me nowhere to go when a film really demands it. This has happened several times at past Cinefests, where the audience of vintage film specialists tends to fuel my desire to make a big impression. I really want this film to work, dammit! With me, that often results in less-than-optimal accompaniment.

I've had some good moments at Cinefest, too. But they seem to happen mostly when I'm able to keep the music from spinning out of control and stay within my range. Strangely, it seems that the longer I can maintain this control during a picture, the more my confidence grows, and so I actually am able to make the most of the big moments when they come. That's exactly what happened last year with 'The Foundling' (1915), a Mary Pickford feature I played for.

I'm now running the risk of overthinking all this, so I'll stop here. Let's just say it's a delicate balance, but I'm starting to understand the contours of how that balance works and how best to manage it so that a film gets the best score I can give it.

So this Cinefest, I'm going to make a deliberate effort to just be myself and do what I do best: start slow, don't be afraid to keep things simple, and work hard to rein in things so that big moments have a chance at feeling authentically big. This will require actual courage on my part, as the temptation to "go big" is huge. But more than ever I understand how important it is for me to do the best I can in my own style.

And after Cinefest, the schedule lightens up a bit, which is good. That's because I would like to take time to push my scoring technique in directions that, yes, build on my strengths and continue to improve my technique, as much as possible. I get a sense that I'm maybe about a third of the way to the point where I have my own authentic vocabulary for scoring silent films. So there's still a lot of work to do.

In the past few years, I've booked a great number of screenings with the idea that what I needed most was experience in front of a live audience. That's been helpful, but I now find I'm often drawing upon the same bank of material rather than creating new stuff, which is where the musical vocabulary truly gets forged. I need to spend more time in the lab, so to speak.

So I'm moving into a phase where I hope to prepare more new material for screenings and see how I can push things in that direction. Though it's always exciting to accompany a film live, doing 'Steamboat Bill Jr.' (1928) yet again using the same tunes I've been using for years is beginning to wear a little thin.