Next up for 'Silent Comedy Week': Charlie Chaplin and a very young Uncle Fester in 'The Kid' (1921) 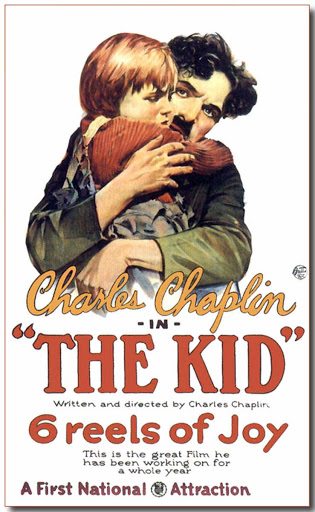 When you work in show biz, you expect to rub elbows with the famous and near-famous.

But when your branch of show biz includes musical accompaniment to screenings of silent films, you take what you can get.

For instance: after a screening last month of 'The Thief of Bagdad' (1924) starring Douglas Fairbanks Sr., a gentleman in the audience said that in the 1950s, when he worked as a delivery boy in Manhattan, he once delivered a package to Douglas Fairbanks, Jr.!

Wow! So we gave him a round of applause. What else could we do?

Which takes us to 'The Kid' (1921), starring Charlie Chaplin and Jackie Coogan, which is tonight's title for the ongoing "Silent Comedy Week" at the Town Hall Theatre in Wilton, N.H.

The first time I did live music for 'The Kid' was in 2008 at the Palace Theatre in Manchester, N.H. Afterwards, a gentleman from Derry, N.H. (I remember) raised his hand to announce that his uncle's cousin by marriage (or some kind of non-direct relative, which I don't remember) had, as a young child, the distinction of working in Hollywood as Jackie Coogan's stunt double.

Wow again! So, yes, he got a round of applause. What else could we do? Of course there was no way to check the accuracy of this claim, but why would anyone make up something so specific?

So I've come to enjoy these random brushes with fame that surface within the audience for silent film screenings I do, even in the most rural New Hampshire crossroads.

A good example is a kindly gentleman who for a time was attending screenings at the Flying Monkey in Plymouth, N.H. who turned out to be the grandson of Rudi Blesh, the jazz expert who collaborated with Buster Keaton on the comedian's first biography in the 1950s.

Amazingly, this gentlemen had in his possession many of the photos and other Keaton family mementos that his grandfather had used in writing the book. They've since been acquired by the International Buster Keaton Society, known as 'The Damfinos.'

And once, after a screening in Brandon, Vt., a very tall middle-aged fellow came up to me to talk music, and turned out he was the grandson of operetta composer Rudolph Friml of 'When I'm Calling You' Indian Love Song fame!

And let me use this opportunity (operetta-tunity?) to share with you a couplet that renowned poet Ogden Nash sent Friml on his 90th birthday:

"I trust your conclusion and mine are similar: 'Twould be a happier world if it were Frimler."

Sometimes the connections are surprising: at one screening of 'Wings' (1927) I accompanied, in attendance was director William Wellman's youngest daughter, who lives in this part of the world and had never actually seen her father's Academy Award-winning blockbuster. (She enjoyed it!)

And perhaps the strongest connection I've come across was a retired local English teacher, Dick Backus, who as a young man was an actor in New York, and had an extended run on stage with Gloria Swanson in the 1970s, when she starred in a play titled "Butterflies Are Free." Dick would sometimes attend screenings and it was a Swanson flick, he'd talk about his experiences working with Gloria.

Dick, are you still out there? Let's connect. If this pandemic continues, we could do a whole week of Gloria Swanson silents at the Town Hall Theater, and put you in an easy chair onstage to reminisce.

But tonight it's 'The Kid.' I'm not sure if our local connection to Jackie Coogan's childhood stunt double will attend, but I sure hope so.

And just to show you how I can crank out the press releases, here's one for tonight's showing. See you there! 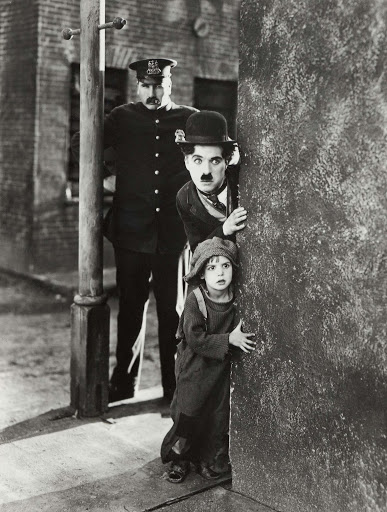 Charlie Chaplin's 'The Kid' to screen on Wednesday, Aug. 12 at Town Hall Theatre

The Town Hall Theatre observes all recommended CDC and local public health guidelines to keep patrons safe in the Covid-19 era. Movie-goers are asked to wear face-coverings in the lobby and theatre until seated; capacity is reduced 50 percent to allow for social distancing; and all high touch areas are cleaned and sanitized after each screening.

"If you can put pieces of the experience back together again, it's surprising how these films snap back to life," said Rapsis, a New Hampshire-based silent film accompanist who creates music for silent film screenings at venues around the country. "By showing the films under the right conditions, you can get a sense of why people first fell in love with the movies."

'The Kid' is part of Silent Film Comedy Week at the Town Hall Theatre, which has temporarily stopped running first-run movies due to lack of availability.

"Response has been great so far," Rapsis said. "Maybe we're at the point where we could all use a good laugh."