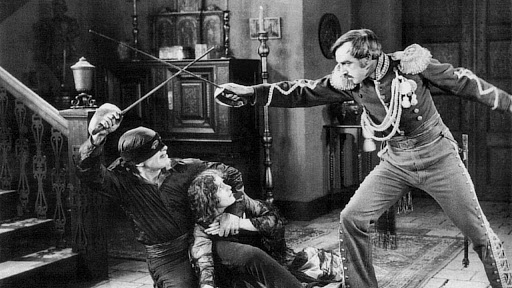 Douglas Fairbanks fails to demonstrate proper face-covering technique in 'The Mark of Zorro' (1920).

Screenings are at 2 p.m. the Town Hall Theatre, 40 Main St., Wilton, N.H. Admission is free, with donations of $10 per person suggested to help support the silent film series.

It's a rare chance to see these two related films back-to-back, which allows film-goers to appreciate the connections between the pair, but also to see how far movies had come in just five years.

A lot more info about the films and the screenings is in the press release, which I've pasted into this post a bit further down.

Before that, however, let me report that Harold Lloyd's comedy 'Why Worry?' was greeted this evening by uproarious laughter from a good-sized crowd at the Flying Monkey Moviehouse and Performance Center up in Plymouth, N.H. 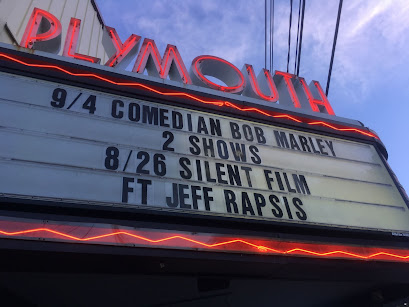 They must have not had enough R's, L's, or Y's to spell Harold Lloyd in 'Why Worry?'

It's the closest to a "normal" silent film screening I've experienced since the Coronavirus pandemic shut down live performances back in March.

Since I started accompanying screenings again last month, attendance has been hit-or-miss: a lot of people are cautious about congregating and still feel pretty vulnerable.

But tonight's screening of 'Why Worry?' checked all the boxes: large crowd (for the Covid-19 era); genuinely funny film; generous audience response; a unique shared experience — needed now more than ever!

So I can say the silent film experience is still alive and well, at least in this corner of the planet. And if you're in the same corner, I invite you to check out 'Zorro' and 'Son of Zorro' this weekend in Wilton, N.H. Here's the press release... 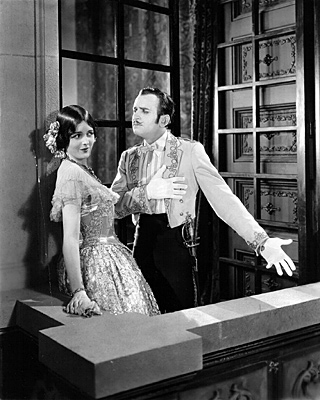 WILTON, N.H.—It's a rare chance to see the classic silent adventure 'The Mark of Zorro' and its popular sequel, 'Son of Zorro' all in one weekend.

On Saturday, Aug. 29, the Town Hall Theatre will present 'The Mark of Zorro' (1920) starring Douglas Fairbanks Sr. to mark the 100th anniversary of the film's original release.

Then, on Sunday, Aug. 30, the theatre will run 'Don Q, Son of Zorro' (1925), a continuation of the Zorro story and Hollywood's first-ever big budget sequel.

Both screenings start at 2 p.m. and will be accompanied by live music performed by Jeff Rapsis.

Admission is free; a donation of $10 per person is suggested to defray expenses and support the Town Hall Theatre's silent film series. 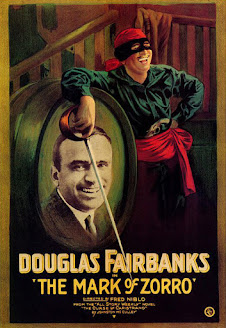 "These two films were among the most popular of the 1920s, and there are many links between them," Rapsis said. "It's a rare chance to see them both together, although each is entertaining and enjoyable on its own."

Douglas Fairbanks Sr., an immensely popular star whose career peaked in the 1920s, served as the model for the George Valentin character in 'The Artist,' the recent silent film that recently won multiple Academy Awards, including the Oscar for Best Picture.

'The Mark of Zorro,' to be screened on Saturday, Aug. 29, tells the story of young Don Diego Vega, the son of a wealthy ranch owner in Spanish California of the early 19th century.

The film stars Fairbanks, who until 'Zorro' had focused on playing traditional all-American leading roles in romantic comedies.

The enduring popularity of 'Zorro' led Fairbanks to film the sequel, which continues the story to another generation. 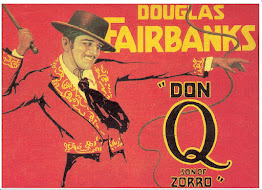 In 'Don Q, Son of Zorro,' Fairbanks plays Don Cesar de Vega, Zorro's grown son, a prodigy with the whip who is visiting the family's Spanish homeland to finish his education.

The trip is no dull semsester abroad: Cesar duels with Don Sebastian of the Queen's Guard (soon to be his rival for the hand of lovely Dolores de Muro), makes love to a general's daughter, and befriends the visiting Archduke of Austria.

But a quarrel ending in violence gives Don Sebastian the chance to dispose of his rival by framing him for murder! Feigning suicide, Zorro's whip-wielding son escapes to the family's abandoned castle, where he makes plans to clear the family name.

Both screenings will be accompanied live by silent film musician Jeff Rapsis.

Rapsis achieves a "movie score" sound for silent film screenings by using a digital synthesizer to reproduce the texture of the full orchestra.

"Each of the 'Zorro' films are terrific movies on their own, but the chance to see the original and then the sequel is a great way to present these two films as they were intended to be seen: on the big screen, with live music, and with an audience," said Rapsis, who provides live music accompaniment for silent film screenings across New England and beyond.