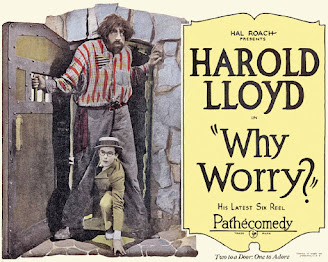 Next up: Harold Lloyd's surreal south-of-the-border fantasy 'Why Worry?' (1923), which I'm accompanying on Wednesday, Aug. 26.

Wow, talk about a title that ought to resonate with today's audiences, 97 years after its original release.

More info below. But first, an update on recent screenings.

Last week, with so many performing venues still not open, I may have been the busiest silent film accompanist on the planet.

Why? Because a local independent theater temporarily gave up on showing first-run films. Instead, every night from Monday through Friday, the Town Hall Theatre in Wilton, N.H. ran silent comedy programs with live music.

Rather than limp by with Hollywood's meager diet of current titles, we feasted on Chaplin, Keaton, and Lloyd. (And with a side helping of Harry Langdon.) 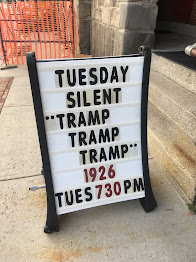 Those are not exactly full houses. But they're a heckuva lot better than, say, Steve Carell in 'Irresistible' (2020), which on several nights last month at the same theater attracted exactly ZERO patrons.

Part of this, of course, is that with Covid-19 among us, many people still aren't ready to return to experiencing cinema in its natural environment — in a darkened room filled with strangers.

But the Town Hall Theatre, like other venues in my part of the world, has been required to take steps to minimize the risk. Seating is limited to half capacity (in this case, from 216 to 108), face-coverings must be worn, and so on.

And I have to say, attendance at the Town Hall Theatre's silent film shows so far has struck a pretty good balance: there's enough people to create that sense of an audience being present, but also still plenty of room to spread out and achieve social distancing.

I also have to say: I much prefer New Hampshire's Covid-19 theater rules to the way things are in Massachusetts, where theaters of any size are limited to just 25 people. 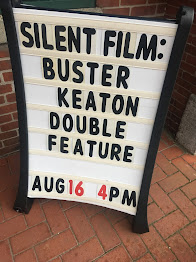 Still, even with that constraint, brave venues are testing the waters. A Buster Keaton double feature — ('The Cameraman' (1928) and 'Sherlock Jr.' (1924) — last Sunday marked my first screening south of the border since things closed last March.

Held at the Center for the Arts in Natick, the 25-person limit wasn't a factor, as the screening attracted all of eight people. Still, a great time was had by all (I can say that conclusively because afterwards I talked with each person) but maybe Bay Staters aren't yet ready to get out and about. The first wave was a lot more serious down there.

Back to my five-shows-in-a-row experience: Being at the keyboard every night, it felt a little like what it must have been like to be an actual working movie theater musician in the silent era. One exception: one then had to worry about forgetting to turn off his or her phone prior to the show.

Okay, more comedy on the way in the form of 'Why Worry?' next week up in Plymouth, N.H. And don't worry, here's the press release. 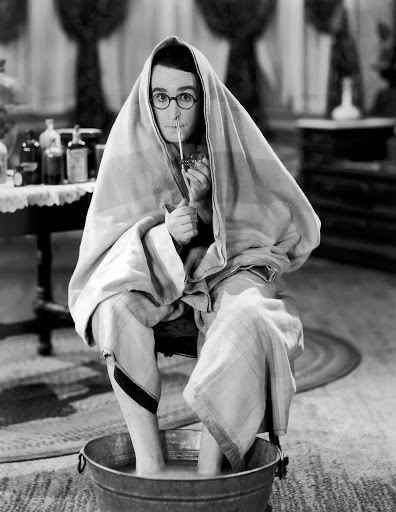 Harold Lloyd stars in 'Why Worry?' on Wednesday, Aug. 26 in Plymouth, N.H.

PLYMOUTH, N.H.—He was the bespectacled young man next door whose road to success was often paved with perilous detours.

See for yourself why Lloyd was the top box office attraction of the 1920s in a revival of 'Why Worry?' (1923), one of his zaniest comedies.

'Why Worry?' will be screened with live music on Wednesday, Aug. 26 at 6:30 p.m. at the Flying Monkey Moviehouse and Performance Center, 39 S. Main St., Plymouth, N.H. General admission $10 per person.

Lloyd's go-getter character proved immensely popular throughout the 1920s, with fans following him from one adventure to the next. 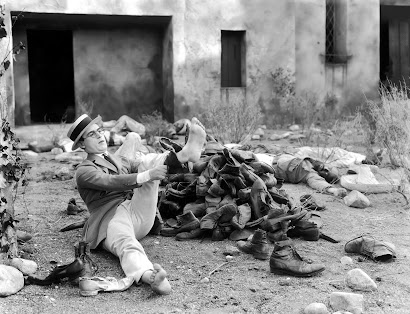 Harold tries on political revolution (and some boots) in 'Why Worry?' (1923).

In the political satire 'Why Worry?', Harold plays a wealthy hypochondriac traveling abroad who gets caught up in a local uprising.

Thrown into prison, Harold is forced to use his wits to escape and rescue his nurse from the clutches of an evil Revolutionary.

Rapsis will improvise a musical score for 'Why Worry?' as the film screens. In creating accompaniment for the Lloyd movies and other vintage classics, Rapsis tries to bridge the gap between silent film and modern audiences.

Face-coverings are required to enter the theater, and should remain on at all times until movie-goers take their seats. Capacity will be limited to 50 percent; audience members are asked to observe social distancing in choosing seats.
"These comedies were designed to be seen with an audience, and it's totally safe to do so," said Rapsis. "Plus, we need all the laughs we can get, which makes a film titled 'Why Worry?' particularly timely.
'Why Worry?' continues a monthly series of silent film programs at the Flying Monkey that include comedy, plus drama, horror, and an unusual Russian documentary. On the schedule:

For more info on the music, visit www.jeffrapsis.com.
Posted by Jeff Rapsis at 3:53 AM