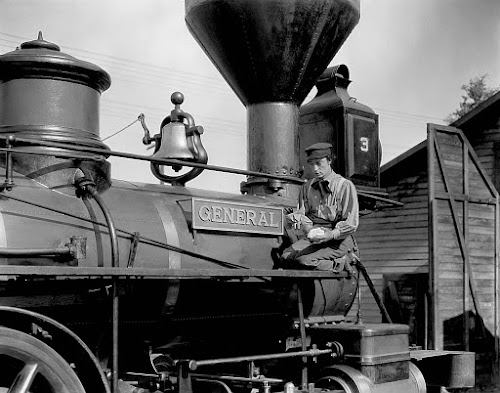 I'm here to report that silent film shown in a theater with live music and a live audience is alive and well.

At the Town Hall Theatre in Wilton, N.H., yesterday's screening of Douglas Fairbanks in 'Robin Hood' (1922) drew the largest crowd yet since the venue reopened last month.

The reopening came after a shutdown of nearly four months, since mid-March, due to New Hampshire's stay-at-home order to limit the spread of coronavirus.

'Robin Hood,' the third title in a summer-long series of Fairbanks swashbucklers, attracted about 50 people on a hot summer day. Not a bad showing, especially when a lot of people are still a bit nervous about sitting in a movie theater.

But tonight starts the real experiment.

Tonight we begin five straight days of silent film comedies, or actually nights, from Monday to Friday. It's a programming move made possible by the Town Hall Theatre's decision to temporarily give up on first-run movies.

So the present's loss is the past's gain. And if there's anything we need right now, it's laughter. So we'll send in the clowns, and see if Chaplin, Keaton, Lloyd, and Langdon are the right prescription for what ails us.

First up: Buster's Civil War epic 'The General' (1926), tonight at 7:30 p.m. Admission $10 per person, with proceeds to help the independent Town Hall Theatre survive until Hollywood starts producing new movies for theaters rather than streaming services.

Here's a press release with all the details. Hope to see you at the movies! 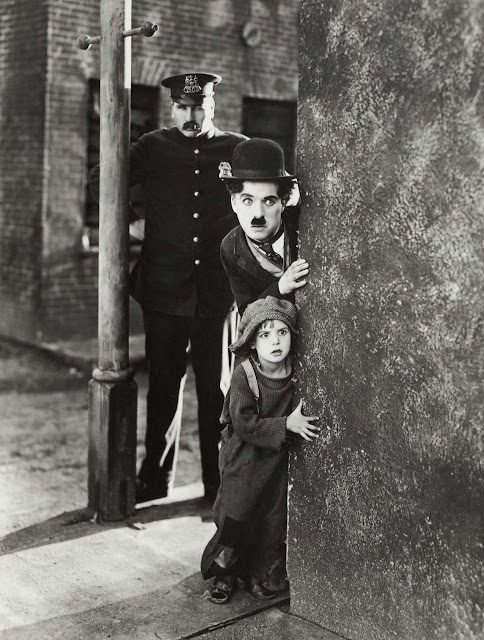 Charlie Chaplin and Jackie Coogan under observation in 'The Kid' (1920).

Indie theater gives up on first-run films, will instead run classic silent comedies with live music

WILTON, N.H.—Clowns to the rescue!

That's the plan at the Town Hall Theatre, where a lack of current Hollywood releases has prompted a pivot to something completely different: proven box office hits from the cinema's golden age of comedy

In August, the independent moviehouse is forsaking first-run movies for an entire week of 1920s silent comedies, all screened with live music.

Silent Film Comedy Week runs from Monday, Aug. 10 through Friday, Aug. 14, with a different show every night at 7:30 p.m.

Admission is $10 per person, with proceeds to support the Town Hall Theatre, a highly regarded independent cinema that Yankee Magazine has named among New England's best.

• Monday, Aug. 10 at 7:30 p.m.: 'The General' (1926) starring Buster Keaton; Buster's Civil War-era masterpiece that tells the story of a Confederate railroad engineer whose train is hijacked by Northern spies.

• Wednesday, Aug. 12 at 7:30 p.m.: 'The Kid' (1921) starring Charlie Chaplin, Jackie Coogan; landmark comedy/drama about a man who raises an infant against all odds. Highlighted by four-year-old Coogan, who matches Chaplin pratfall for pratfall.

• Thursday, Aug. 13 at 7:30 p.m.: 'Grandma's Boy' (1922) starring Harold Lloyd; A cowardly young man must learn to conquer his fears before dealing with a larger menace to his community. Riotous small town comedy.

• Friday, Aug. 14 at 7:30 p.m.: 'Steamboat Bill Jr.' (1928) starring Buster Keaton, Ernest Torrence; as the son of a gruff steamboat captain, Buster tries to make the grade even as storm clouds gather—and romance brews with the daughter of a rival ship owner. (That's Buster below, at left.) 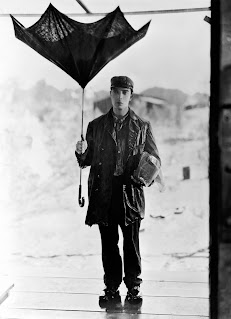 This year's lack of theatrical releases, plus continuing public fear of Covid-19, has made it difficult for small independent moviehouses such as the Town Hall Theatre to attract audiences this summer.
Markaverich reopened his two-screen theater in early July after being closed nearly four months due to Covid-19 stay-at-home orders.

The theater made every effort to comply with Covid-19 public safety guidelines: attendance was limited to half-capacity, face coverings were required, social distancing was enforced, and show times were staggered to keep people from congregating in the lobby and to enable thorough cleaning between screenings.

But audiences didn't come. On many weeknights, not one person showed up for the evening shows. The one big summer hit Markaverich was hoping to book, 'Hamilton,' was released via streaming over the 4th of July weekend, bypassing movie theaters entirely.
"We've been ready to go, but we can't run a movie theater without movies," Markaverich said.
The one bright spot was the theater's silent film series, which also restarted in July. A screening of 'The Three Musketeers,' a 1921 silent swashbuckler starring Douglas Fairbanks, drew about 50 movie fans—the Town Hall Theatre's largest turnout since reopening.

With few new releases in the pipeline, and with audiences reluctant to attend, Markaverich decided to pull the plug on first-run movies in late July.

Instead, he'll open the theater on a limited basis, relying on silent comedies and other fare until new releases become available, and people feel motivated again to come out to the movies.
"I hope we'll be back to showing first-run features after Labor Day," Markaverich said. "In the meantime, it says a lot about the state of Hollywood's output, and the lack of support for independent cinemas, that we have to turn to century-old comedies to keep from going dark or closing for good."
Silent Film Comedy Week opens with Buster Keaton's classic feature 'The General' (1926) on Monday, Aug. 10 at 7:30 p.m. at the Wilton Town Hall Theatre, 40 Main St., Wilton, N.H. General admission is $10 per person, with proceeds to benefit the Town Hall Theatre during the Covid-19 shutdown.
For more information, call (603) 654-3456 or visit www.wiltontownhalltheatre.com.
Posted by Jeff Rapsis at 3:09 PM