Study for Valentine's Day with the master, Rudolph Valentino, in 'Blood and Sand' (1922) 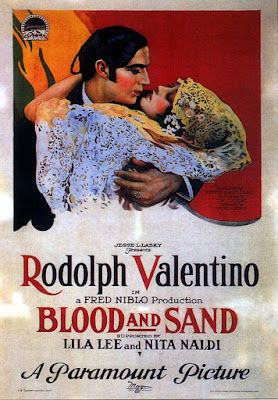 A poster for 'Blood and Sand,' in which Rudolph Valentino's name is spelled with an 'O.'

And that's no ugly metaphor—it's the premise of 'Blood and Sand' (1922), a sizzling silent romantic drama I'm accompanying on Sunday, Feb. 6 at the Town Hall Theatre in Wilton, N.H.

Showtime is at 2 p.m. Lots more detail in the press release below.

For now, a quick report on last night's screening of a Harry Houdini film at the Garden Cinemas in Greenfield, Mass.

The film was 'The Man from Beyond' (1922), in which our hero plays a sailor frozen on a ship trapped in Arctic ice floes for a full century.

Discovered and unthawed, he enters the modern world (of the 1920s) to search for his lost love from 1820, whom he believes is reincarnated.

The screening was programmed as part of Greenfield's annual Winter Carnival, which, like 'The Man From Beyond,' is celebrating its 100th birthday this year. (Hence the Houdini-on-ice film.)

We've tried running silents with live music at the Garden a few times, with mixed results. For some reason, however, this screening caught the public's imagination—about 60 people attended, enough to really fill the relatively small screening room we were using.

Because virtually everyone there was new to silent film, I went over some basics prior to the screening. That included giving people permission to react openly to what they were about to see: to cheer when something good happened, to boo the villain, and so on.

Well, the audience took that ball and ran with it. Right from the start, people engaged with the film as if it were a sing-a-long musical. Nothing like an energized audience to bring to life a film from the silent era!

And yes, there were occasional moments when a few self-appointed smart-alecks felt compelled to yell wisecracks at the screen, a la Mystery Science Theatre 3000.

But no harm done, and eventually the film's melodrama swept up everyone, just as actress Jane Connolly (playing Houdini's beloved Felice, both in the present and the past) wound up being swept toward Niagara Falls in her canoe.

And I must say, it was hard to resist my own urge to shout a MST3K-style riff when Connelly decides to escape a pursuer by boarding a canoe and launching herself into a raging cataract just above Niagara Falls, f'rchrissakes!

Casting note: the major role of Gregory Sinclair is played by Erwin Connelly, a round-faced actor who pops up frequently in small roles in Buster Keaton's silent features—most notably as the butler in 'Sherlock Jr.' (1924).

Frequent Keaton screenings have made Connelly's face a familiar one to me. He plays the husband quarreling memorably with his wife in 'Our Hospitality,' and also an offended priest in 'Seven Chances.'

So it was a treat to see him carrying a lead role outside Buster's world.

There's not much about this performer online, but it turns out we share the same birthday: Jan. 14. His sparse screen credits include 'The Fire Brigade' (1926), which has been newly restored and that I hope to accompany later this year.

And yes, the Jane Connelly in 'The Man From Beyond' turns out to be Erwin's wife. They had appeared in vaudeville together, and were both hired for major roles in the Houdini picture. With Erwin's vaudeville background, it's not surprising he turned up in Keaton's pictures.

If all this sounds intriguing, I'll be accompanying 'The Man From Beyond' again in April, when it screens at the Town Hall Theater in Wilton, N.H.

But before that, we have Rudy Valentino to get you all hot and bothered for Valentine's Day. Hope to see you there for 'Blood and Sand' on Sunday, Feb. 6 at 2 p.m. Details in the press release below. 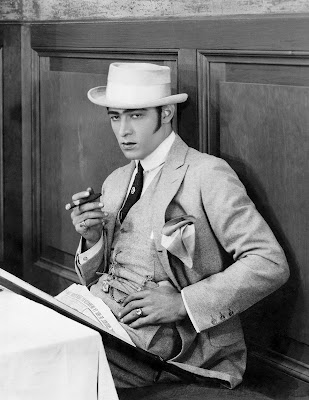 Admission is free, with a suggested donation of $10 per person to help support the theater's silent film series.

The classic drama will be shown with live music by silent film accompanist Jeff Rapsis.

The No. 3 box office hit of 1922, 'Blood and Sand' combined exotic Spanish locales with Valentino's iconic performance as a bullfighter.

The film tells the story of Juan Gallardo (Valentino), a village boy born into poverty who grows up to become one of Spain's greatest matadors. Gallardo marries a friend from his childhood, the beautiful and virtuous Carmen.

But after achieving fame and fortune, he finds himself drawn to Doña Sol (Naldi), a wealthy, seductive widow. They embark on a torrid affair.

But then Gallardo, feeling guilty over his betrayal of Carmen, tries to free himself of Doña Sol.

Gallardo's troubles spill over to the bullfighting arena, where he becomes reckless. Can he cope with the gravest challenges of his young life—both in romance, and in the arena?

The movie's immense popularity helped establish Valentino as one of the megastars of the silent film era.

'Blood and Sand' was based on the 1909 Spanish novel "Sangre y arena" (Blood and Sand) by Vicente Blasco Ibáñez and the play version of the book by Thomas Cushing.

Unusual for Hollywood at the time, women played key roles in the production of 'Blood and Sand.'

The story was adapted by June Mathis, the screenwriter credited with first recognizing Valentino's appeal, and edited by future director Dorothy Arzner.

The film inspired the 'Blood and Sand' cocktail, a Prohibition-era mixed drink.

• Sunday, Feb. 20, 2022 at 2 p.m.: 'When Knighthood was in Flower' Marion Davies goes medieval in this epic big budget costume picture from 1922 that put her on the map as a top Hollywood star.