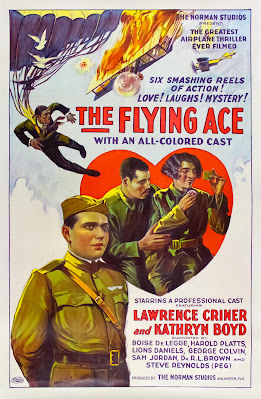 A not-very-subtle promotional poster for the all-Black drama 'The Flying Ace' (1926).

In honor of Black History Month, tonight (Friday, Feb. 18) the Regent Theater of Arlington, Mass. is screening 'The Flying Ace' (1926), with live music by me.

It's a rare surviving example of what some scholars call "Race Cinema," meaning movies made for segregated theaters that were part of the American movie landscape in the first half of the 20th century.

'The Flying Ace,' a rare surviving example of this type of film, was recently added to the National Film Registry by the Library of Congress for being either "culturally, historically, or aesthetically significant."

I think 'The Flying Ace,' produced by Norman Studios of Jacksonville, Fla., applies to the first two distinctions: cultural and historic. It's a vivid reminder of racism that permeated everyday life in its era—so much so that people set up separate theaters for people of different skin color!

In terms of being "aesthetically significant"—well, you can make up your own mind on that. But I believe that any film from a century ago, no matter what its level of aesthetic achievement, has a lot to say to us today, if only for just the passing of time.

And let's be clear about one thing. By screening 'The Flying Ace,' neither I nor the Regent Theatre are celebrating the fact that for many decades, movie theaters in the United States were segregated by race.

No. 'The Flying Ace' is a concrete artifact of a shameful legacy of racism that pervaded society at the time, and with which we still grapple today.

But by acknowledging that it once existed, and preserving this artifact from the era (and I believe screening vintage film before the public is part of preservation), we can be better equipped to confront racism in our own time.

So hope to see you at the Regent tonight at 7:30 p.m. Much more info in the press release below. 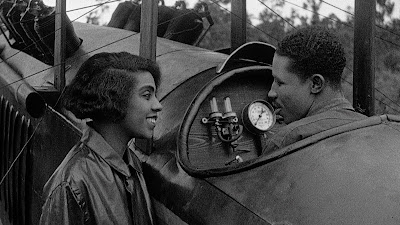 Kathryn Boyd and Laurence Criner star in 'The Flying Ace' (1926).

ARLINGTON, Mass. — Can discrimination exist in an America where everyone is Black?

That's among the questions posted by 'The Flying Ace' (1926), a rare surviving example of so-called "race" movies produced early in the 20th century for Black audiences in segregated cinemas.

'The Flying Ace,' recently named to the U.S. National Film Registry, will be screened in honor of Black History Month on Friday, Feb. 18 at 7:30 p.m. at the Regent Theatre, 7 Medford St., Arlington, Mass.

General admission is $15 per person. Tickets available at the door or online at www.regenttheatre.com.

'The Flying Ace' was produced by Norman Studios in Jacksonville, Fla., using professionals such as Laurence Criner, a veteran of Harlem’s prestigious all-black theater troupe the Lafayette Players, but also many non-professionals for minor roles. 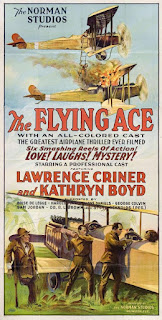 Norman Studios was among the nation's top film production companies making so-called "race" films for this market from the 1920s to the 1940s. 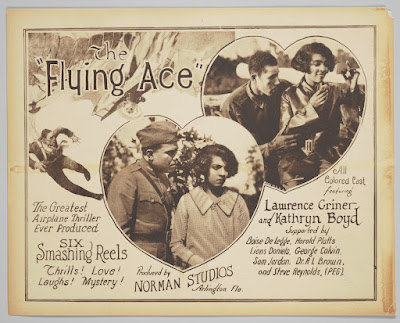 Rapsis said the Regent Theatre screening is a rare chance to see the film as it was meant to be experienced—on the big screen, with live music, and with an audience.

General admission is $15 per person. Tickets available at the door or online at www.regenttheatre.com. For more information, call the theater at (781) 646-4849.