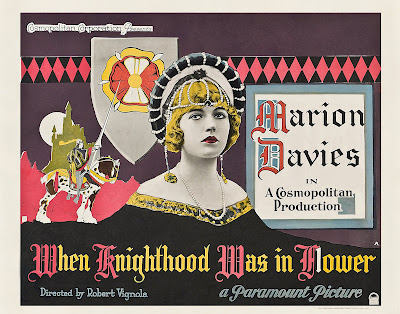 Promotional artwork for 'When Knighthood Was in Flower' (1922).

This afternoon's screening of 'When Knighthood in Flower' is the finale of a five-days-in-a-row series of screenings that saw me doing music for five films in venues across three states.

But what an ending! The Marion Davies costume epic, set during the reign of England's King Henry VIII, was produced on a grand scale. Released in 1922, it was the year's second-highest grossing film.

It's part of our ongoing series at the Town Hall Theatre in Wilton, N.H. celebrating the 100th anniversaries of motion pictures that came out that year. Lots more info in the press release I've pasted in below.

For now, let me report that last night's screening of 'The Last Command' (1928) in Brattleboro, Vt. resulted in some unexpected drama before the film could begin.

In late afternoon, a wall of heavy squalls moved across northern New England, laying down an unexpected coating of snow across the region.

Brattleboro would normally be a 90-minute drive, so I left around 5 p.m. to arrive in time to set up for the screening, which was scheduled to start at 8 p.m. The snow had cleared out, so I figured that the timing had worked out well.

Well, it hadn't. The main highway (Route 101) across southern N.H. isn't far from my house, and almost immediately traffic on this busy road came to a complete stop. In a weird meteorological phenomenon, somehow the snow had adhered to the pavement, creating a coating of sheer ice that was impossible to drive on.

Seriously! Cars were off the road in both directions, and the rest of us were lined up and moving at a glacial pace, if at all. It took a half hour to just go a couple of miles.

Stuck in this situation, with no real alternative routes that would be any better, I kept watching my arrival time slip further into the future.

I began pinging Jamie Mohr, who runs the Epsilon Spires venue where I would accompany 'The Last Command,' with updates, wondering if I would ever make it out there. (Jamie said she would get some Chinese food, which gave me confidence.)

My GPS indicated that conditions seemed normal for most of the route ahead, so I held out hope as I crawled along, trying not to slide off into the woods. After awhile, conditions did improve and traffic began to move at a more normal pace.

Apparently the squalls had seen fit to sock just the area where I lived, as the rest of the ride to Brattleboro was uneventful. But the first five miles had taken 45 minutes, meaning I arrived with just enough time to set up things.

And the next thing you know, I'm at the organ console, doing music for 'The Last Command,' aided by the digital synthesizer to produce drums and percussion where needed, plus a piano in a couple of key scenes. Oh—and also a brass school bell for when a bell is prominently rung in one scene.

The film, directed by Josef von Sternberg and starring Emil Jannings in an Academy Award-winning performance, drew the usual strong reaction—it's one of the truly great silent dramas, I think, produced when the form was at the peak of its eloquence.

But this screening brought a new wrinkle: afterwards, people said it was a little unsettling to take in all the Russian military scenes as the present situation unfolds with Russia and Ukraine. I didn't see the parallel, but I could understand how it would be on people's minds. 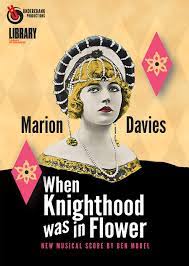 Well, this afternoon's screening of 'When Knighthood Was in Flower' should provoke no such unease, as King Henry VIII has been off the throne for about 500 years.I want to point out that the only reason we can show 'Knighthood' is because of the restoration recently released by Ben Model and Undercrank Productions. Ben and his colleagues did a terrific job.

Ben was recently in touch and shared a few notes about the effort that went into reissuing the film, which I had mistakenly called a transfer. I think it's worth including here, and I'll also mention it at this afternoon's screening:

"...the Undercrank edition is a restoration, and not a transfer. Stabilization and clean-up and grading was done on the nitrate scan.

Also, the tints weren't added to look the way silents did – we reinstated the tinting and hand-coloring to exactly what was seen in theaters in 1922. There are tinting slugs at the heads and tails of several of the reels indicating "light pink", "amber", "light amber" and "blue tone/biscuit" (a combination of tinting and toning).

We also found a review from Robert E. Sherwood that talks about the hand-coloring of the torches, and ads in the trades for the guy who did the hand-coloring; and so I got Jack Theakston to replicate this digitally, frame-by-frame.

So, you can tell your audience that they're seeing what people saw in the film's original release of the full-length road-show edition (the general release version was about 25 mins shorter).

And, had Marion Davies not had a print struck of this in the mid-1930s, and then donated all her 35mm nitrate prints to the LoC in the 1950s, we would not be able to see this at all. :)

Who knew...Marion was also a film conservationist!

Thanks so much! Have a great show!

Okay, hope your Sunday plans include a trip back to the splendors of medieval England via 'When Knighthood Was in Flower' starring Marion Davies. The show begins at 2 p.m. More info about the film in the press release below. 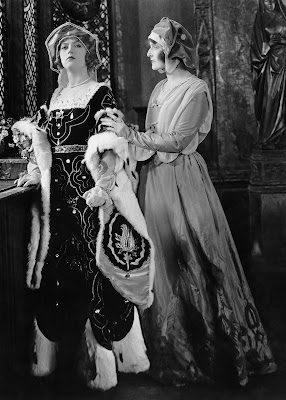 Set during the reign of Henry VIII, silent film blockbuster to be shown with live music on Sunday, Feb. 20 to celebrate 100th anniversary of release

WILTON, N.H.—It was a movie that transported audiences back to the reign of England's King Henry VIII, scoring an enormous box office success.

It was 'When Knighthood Was in Flower' (1922), a costume epic starring Marion Davies that became the year's second-highest-grossing film.
See what all the royal fuss was about when the picture is shown with live music on Sunday, Feb. 20 at 2 p.m. at the Town Hall Theatre, 40 Main St., Wilton, N.H.
Admission is free, with a suggested donation of $10 per person to help support the theater's silent film series.

The classic Tudor-era drama will be shown with live music by silent film accompanist Jeff Rapsis.
In 'When Knighthood Was in Flower,' Marion Davies plays Mary Tudor, younger sister of England's King Henry VIII, who falls in love with a guardsman below her class.
Unfortunately, Mary is already betrothed to the aged King Louis XII of France. Her illicit romance thus touches off a furor with international complications.
Planned from the start as a big budget spectacle, 'When Knighthood Was in Flower' cost $1.8 million to produce, making it among the most expensive movies of the silent era.
The film was directed by Robert G. Vignola and based on a popular 1898 novel by Charles Major. 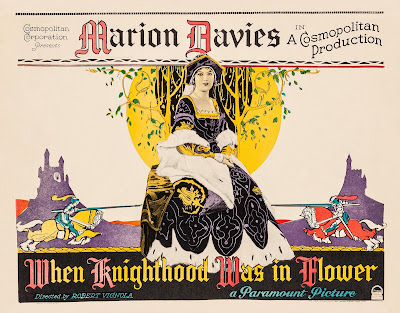 A lobby card for 'When Knighthood Was in Flower.'
'When Knighthood Was in Flower' was produced by William Randolph Hearst (through his Cosmopolitan Productions) for Marion Davies and distributed by Paramount Pictures.
Davies, longtime mistress of publishing magnate Hearst, would go on to become one of the most popular leading ladies of the silent era.
For 'When Knighthood Was in Flower,' she spent four months learning to fence in order to convincingly perform her own on-screen swordfighting.
Although some exteriors were shot on location at England's Windsor Castle, most of the film was actually made in Connecticut and New York City, where Cosmopolitan was based at the time.
Ziegfeld Follies designer Joseph Urban planned so many lavish sets, Hearst had to rent space at two other New York studios to complete the film and hire 3,000 extras for the crowd scenes.
For Davies' 15 gowns, Urban's daughter, Gretl Urban Thurlow, duplicated outfits originally worn by Mary Tudor.

The edition of 'When Knighthood Was in Flower' that will be presented is a new digital restoration from Undercrank Productions/Library of Congress.