Tonight! 'Girl Shy' in Manchester, N.H. But first, Mayer to Shakespeare: 'Lose all that death at the end' 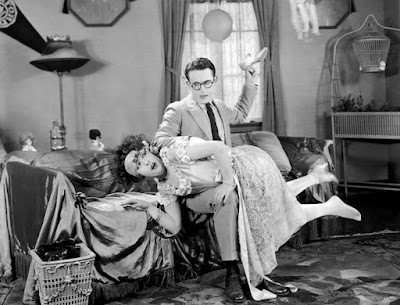 Complete info is below in the press release. Hope to see you there for one of the great audience-pleasing comedies of the 1920s.

And now, a report on last night's screening of 'The Temptress' (1926) starring Greta Garbo and Antonio Moreno, which I accompanied at the Flying Monkey Moviehouse and Performance Center in Plymouth, N.H.

Here's something you don't get to announce every day: DOUBLE SPOILER ALERT!

It's one of those films with two endings—an original tragic denouement, and also an upbeat and completely different boy-gets-girl happy ending ordered by studio boss Louis B. Mayer, who found the original finish unacceptable.

(You can hear Mayer advising new screenwriter Billy Shakespeare: "Forbidden romance—great story, kid! But lose all the death at the end. Have them settle in a bungalow in the suburbs, and show at least one infant in the closing scenes. Then you got yourself a picture!")

Well, Mr. Mayer. I'm here to report that posterity, at least in the form of last night's audience, vastly prefers the original ending, in which Garbo abandons lead Antonio Moreno, descends into a boozy haze, and supports herself apparently by prostitution.

As much of a downer as that seems, it's far more fitting to this dark and edgy drama than what Mayer cooked up: an ending in which Garbo and Moreno join forces to build a giant dam in South America, and then publicly celebrate their love at the opening ceremonies in front of what seems to be the entire Argentine army.

I have to say, this is a challenging film to accompany, as it veers from sophisticated Paris to back country Argentina. The fact that it had two directors makes it seem a little schizophrenic, too, similar to how the first Christopher Reeve 'Superman' (1978) had two directors, and shifts completely in tone and mood once Clark Kent starts working at the Daily Planet.

And never mind Greta Garbo—how about that Antonio Moreno? I'd only ever seen him before alongside Clara Bow in 'It' (1927), his one well-known role. But in 'The Temptress,' he gives a whale of a performance, both emotionally and physically. 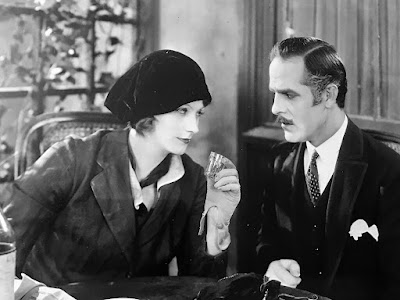 Antonio Moreno with Greta Garbo in 'The Temptress.'

Consider: He dances, he throws knives, he shoots things, he gets whipped and does some whipping himself, gets washed away in a flood, and nearly goes berzerk. MGM certainly got their money's worth from Moreno in this picture.

I looked, and Moreno appeared in dozens upon dozens of lesser-known pictures, both in the silent and sound era. Of the few titles I recognized, he has a small role in Laurel & Hardy's 'The Bohemian Girl' (1936), but that's about it. (Apologies to Clara.)

Besides the story itself, another tragedy associated with last night's screening of 'The Temptress' (not to be confused with 'The Tempest' (1928) starring John Barrymore) was yours truly requesting an ill-advised adjustment to the aspect ratio prior to the show.

With older films on oldish discs being run on much newer players and digital projectors or even off laptops, aspect ratio is always a "hold your breath" issue. You just never know what's going to appear on screen until you hit 'Play.'

Sometimes it's dead on, and hallelujah when that happens. But most often, modern projection systems want to play everything at 16:9 or some other wide-screen ratio. And as you may know, films a century ago were shot almost exclusively using a 4:3 ratio.

So when that happens, everyone gets wider. Buster Keaton looks fat. Fatty Arbuckle looks morbidly obese!

Last night at the Flying Monkey, the aspect ratio was clearly being stretched horizontally, so changes were in order. We narrowed the horizontal by 10 percent, and it seemed better. (I usually can tell right away if there's an FBI anti-piracy slide, as the FBI logo should be perfectly round. Same with tires on cars, etc.)

But after playing it a bit longer, I felt the typeface for the titles looked off. With many discs, we need to narrow the horizontal by 20 percent to make it look right, but in this case, the most we could go was 16 percent before the disc/player/projector/whatever halted. That's as far as it would go!

So that's what we kept, which was unfortunate, because once the picture started for real, it was apparent that we had gone too far. Really! Greta Garbo, who should look pretty svelte, looked positively anorexic!

Well, it wasn't so bad as to prompt me to stop and get it adjusted yet again. And there's always another screening—in this case, Harold Lloyd's 'Girl Shy' tonight at the Rex Theatre in downtown Manchester. We'll see if we can get the ratio right this evening.

And at the Rex, they have a new all-digital LED projection system that adds yet another layer of complexity to the whole equation. Cross your fingers! 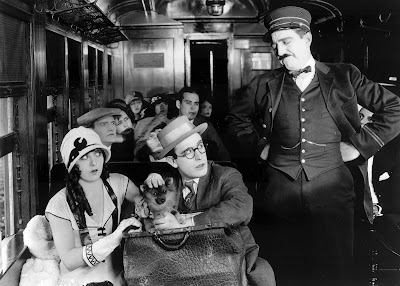 Admission is $10 per person. Tickets are available at the door or online at www.palacetheatre.com in advance.

'Girl Shy' (1924) stars Harold Lloyd as a timid young man from a small town who pens a book about imaginary female conquests.

Trouble begins when bashful Harold falls in love for real, and then must rescue his beloved from marrying the wrong man in the big city.

" 'Girl Shy' is a great film to show around Valentine's Day, because it's all about the ageless human experience of love," Rapsis said.

The film is bursting with visual comedy typical of the silent era, but the romantic storyline was strong enough to act as a counterweight, creating a new hybrid genre now known as the romantic comedy, or "rom-com."

Though Lloyd's reputation later faded due to unavailability of his movies, the recent re-release of most of his major films on DVD and other media has spurred a reawakening of interest in his work and has led to more screenings of his work in moviehouses, where it was designed to be shown.

"Seeing a Harold Lloyd film in a theater with live music and an audience is one of the great experiences of the cinema of any era," said Jeff Rapsis, the Rex Theatre's resident silent film accompanist.

The Rex Theatre's silent film series is intended to give local audiences a chance to experience the best of early Hollywood the way it was meant to be seen—on the big screen, with live music, and with an audience.

• Thursday, April 21, 2022, 7:30 p.m.: 'Ben Hur' (1925) starring Ramon Novarro and a cast of thousands. In the Holy Land, a Jewish prince is enslaved by the occupying Romans; inspired by encounters with Jesus, he lives to seek justice. One of the great religious epics of Hollywood's silent film era, including a legendary chariot race that's lost none of its power to thrill.