This Sunday: Silent Shakespeare! And then 'Ben Hur,' then Cleveland, and then back to Boston! 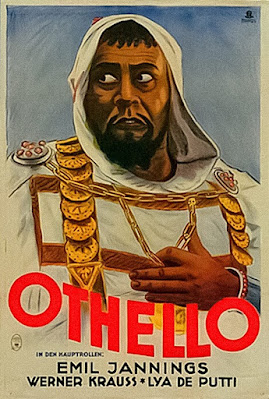 Up first: music for an early silent screen adaptation of Shakespeare's 'Othello' (1922), made in Germany and starring Emil Jannings in the title role.

Yes, silent Shakespeare! See what you think: the screening is Sunday, April 17 at 2 p.m. at the Town Hall Theatre in Wilton, N.H. More detail in the press release below.

And the next day finds me swinging out to Cleveland, Ohio, where I'll accompany two films at the Cleveland Cinematheque on Friday, April 22 and then join the fun at the annual 36-hour sci-fi marathon at nearby Case Western University.

At the Cinematheque, it's 'Nanook of the North' (1922) and then the recently reissued 'Straight is the Way' (1921), a curiosity set in my own home state of New Hampshire.

At the sci-fi marathon, it's 'Der Golem' (1920), which will be screened about 20 hours into the big show. Looking forward to the reaction!

And then I scoot back to Boston to do music for the big MGM silent film version of 'La Bohéme' (1926) starring Lillian Gish and John Gilbert. Screening is Sunday, April 24 at 2 p.m. at the Somerville Theatre, and marks the restart of the venue's 'Silents, Please!' series.

But before any of that, it's time to brush up our Shakespeare this Sunday afternoon. Here's the press release. Happy Easter weekend and hope to see you at the movies! 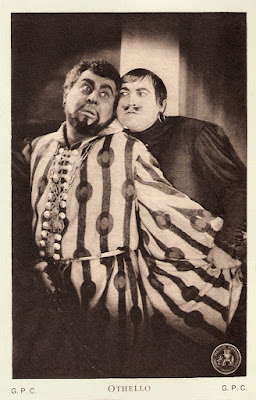 WILTON, N.H.—His tales have been adapted for the big screen since the beginning of the movies.

He was playwright William Shakespeare, whose tragedy 'Othello' first appeared as a feature film via a movie made in Germany in 1922.

The silent 'Othello' takes Shakespeare's dialogue-driven drama and transforms it into a story told visually.

'Othello' boasts two of the most celebrated German actors of the era: Emil Jannings in the title role, and Werner Krauss as his nemesis, Iago.

Jannings would relocate to Hollywood later in the 1920s, winning the first-ever Best Actor honors at the inaugural Academy Awards in 1929.

Krauss, a noted German stage actor, is best remembered for playing the title role in the film 'The Cabinet of Dr. Caligari' (1920).

The film closely follows Shakespeare's story of Othello, a Moorish general provoked to jealousy regarding his wife Desdemona.

The story opens with Othello choosing the loyal Cassio as his lieutenant. This arouses bitter jealousy in Iago, another soldier, who vows to scheme against his general.

Othello is soon sent to Cyprus to repel a Turkish invasion, and he arranges for Iago and his wife to bring Desdemona with them to Cyprus.

When Iago's wife learns of a treasured handkerchief that Othello gave to Desdemona, Iago hatches a plan that he hopes will destroy Othello by provoking him to jealousy.

The film, directed by Russian-born Dmitri Buchowetzki, is widely regarded as a successful adaptation of the Bard's story to the silent screen.

"Produced on an elaborate scale, Othello may not be true to the letter of Shakespeare, but is undeniably a smorgasbord of visual delights," according to a review on LetterboxDVD.com.

"These films were designed for the big screen, live music, and large audiences. Put it all together, and you can get a sense of why people first fell in love with the movies," Rapsis said.

The screening of 'Othello' will precede the 458th anniversary of Shakespeare's birthday, which scholars believe to be April 23, 1564.

"It may seem counterintuitive for a Shakespearean play to be made into a silent film," Rapsis said.

"But stage dramas were a huge source of material for early cinema, and Shakespeare's stories were popular enough to warrant the attention of filmmakers right from the beginning," Rapsis said.

The screening is part of the Town Hall Theatre's ongoing series honoring the 100th anniversary of significant motion pictures from 1922.

Programs have included all of 1922's five highest-grossing titles, each shown on the big screen with live music, as well as century-old oddities, short films, cartoons, and more.