On Sunday, May 1 in Wilton, N.H.: 'Man With A Movie Camera,' innovative silent documentary filmed in Ukraine 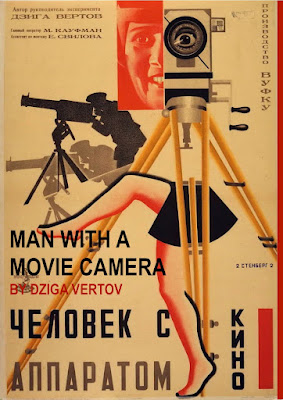 A Russian-language poster for the documentary 'Man With A Movie Camera' (1929), shot largely in Ukraine.

This Sunday, it's a double-header!

First, at 2 p.m., a screening of the silent documentary 'Man With A Movie Camera' (1929) at the Town Hall Theatre of Wilton, N.H. Lots more about that in the press release below.

After that, I scoot over Temple Mountain to the Park Theatre of Jaffrey, N.H., where I'll accompany Harold Lloyd's 'Grandma's Boy' (1922) for the venue's 100th birthday celebration, which starts at 5 p.m.

More info about the Park's big celebration (it's a fund-raising, with tickets $50 each) is online here.

But first, kudos to the audience for last night's screening of 'Old Ironsides' (1926) at the Custom Home Maritime Museum in Newburyport, Mass.

Packed into an upstairs exhibit room that became an impromptu movie theater, the Friday night crowd was with the picture right from the start, with big reactions throughout.

Everyone seemed to really get into the tale of the early days of the U.S.S. Constitution, which remains afloat a short distance down the coast in Boston Harbor. People cheered the action, gasped at the love story, and roared at the comedy. 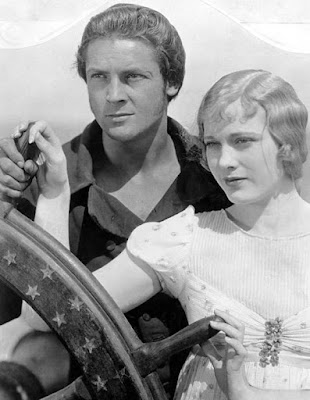 George Bancroft and Esther Ralston at the wheel in 'Old Ironsides' (1926).

Why? Well, sometimes it just clicks. In this case, I think it was a combination of the right space (small, but nearly standing room only for the 40 attendees, which creates energy and excitement) and a really good match of subject matter and audience interest.

In this case, 'Old Ironsides' formed a celebration of sailing ships from long ago, which you'd have to expect would go over well at a maritime museum.

During one of the picture's extended battle scenes, one very nice lady contributed to the sonic mayhem by having her cell phone go off repeatedly. I didn't mind this, once I realized her ring-tone was not coming from my synthesizer.

But still. Note to self: don't neglect to tell people to turn off their devices. Pacemakers excepted.

About Sunday's screening of 'Man With A Movie Camera'—most of this ground-breaking documentary (it's more like an early music video, actually) was shot in and around Kiev and Odessa, then part of the Ukrainian Soviet Socialist Republic, and now part of the independent nation of Ukraine.

A lot of the sickening destruction going on in Ukraine involves these cities and the people living in them. Because 'Man With A Movie Camera' celebrates these people and their lives, I felt it was only appropriate to get the film on the screen right now.

Seeing it will remind us, I hope, of the huge human tragedy that's unfolding there right now. These are real people in a real place with a long and proud history.

At the risk of sounding flippant, here's what I didn't put in the press release.

I felt it was only appropriate to show the film on May Day, which back in the days of the Soviet Union (which Vladimir Putin would like to return to) was often an occasion for parades of military hardware through Red Square.

Instead, let's use the day to celebrate images of ordinary daily life in Ukraine, even if they're from long ago, as a way to thumb our collective noses at the inhumane bastard in the Kremlin. 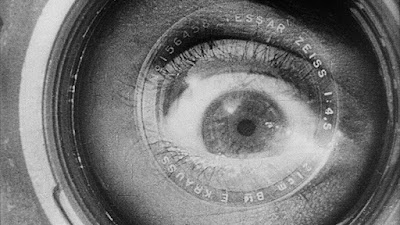 A scene from Dziga Vertov's eye-opening film 'Man With A Movie Camera' (1929).

Filmed in Ukraine: 'Man With A Movie Camera' with live music on Sunday, May 1 in Wilton, N.H.

WILTON, N.H.—It has no story, but it tells everyone's story. It's a silent film, but it's the world's first music video. It has no actors because the star is you, the audience.

It's 'Man With A Movie Camera' (1929), director Dziga Vertov's celebration of city life in Ukraine via a dizzying collage of images and kinetic cinematography that's left audiences breathless for nearly a century.

The film was shot largely in Kiev and Odessa, cities that were then in the Soviet Union but which are today part of an independent Ukraine.

Dziga's experimental documentary caused a sensation when it was released at the end of the 1920s, when motion pictures were still a new artistic medium.

Even with no story and no actors, 'Man With A Movie Camera' was filled with eye-popping visuals that anticipated later music/image films such as 'Koyaanisqatsi.'

Today, the scenes of ordinary life in Kiev and Odessa possess a special poignance due to recent and ongoing Russian military attacks.

"In the Soviet Union, May Day (May 1) was a holiday used to promote solidarity, with military parades a common feature," Rapsis said.

"We chose to program 'Man With a Movie Camera' on this day as a symbolic gesture of defiance against Vladimir Putin's aim to reestablish a Soviet-style empire of client states, including Ukraine," he said.
The screening will include a display of authentic Soviet-era propaganda posters and banners that Rapsis collected during visits to the region in 1991 and 1992, when the Soviet Union was collapsing.
Although no official score was composed for the silent feature, director Vertov specified the type of music that he wanted played wherever the film was screened. Rapsis will create music that follows those guidelines.

"Vertov wanted a kind of kinetic, energetic music to be played with the film, rather than background music," Rapsis said. "The goal is to create music that acts as an equal partner in conveying a kind of exhilaration that I think Vertov was going for."

Filmed mostly in the bustling Ukrainian cities of Kiev and Odessa in the late 1920s, the film features a wide range of slice-of-life scenes showing everything from streetcars to sports contests. Vertov took his camera everywhere, from a birth hospital to a divorce court.

Most spectacularly, Vertov experimented with filming ordinary scenes (such as a crowded public square) at a very slow frame rate. When run at a normal speed, the result was a speeded-up view of reality that few had ever seen or studied before.
He also experimented in the other direction: scenes of athletic events are shown in extreme slow motion, so the human form can be observed in ways never before possible. 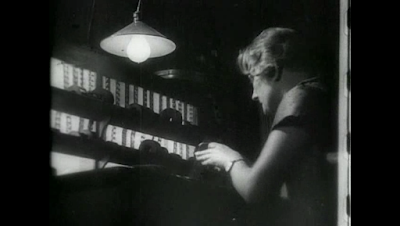 "Although 'Man With A Movie Camera' has some dark scenes, ultimately it's a celebration—of life in what was then the fast-changing Soviet Union, but also in a way that speaks to life regardless of time or place," Rapsis said.

"That's what I'll try to capture in the musical score, which will be performed live and will be largely improvised," Rapsis said.