Easter must be on its way, as this month's silent film schedule is thick with Biblical epics.

Coming up next: the original silent version of 'Ben Hur' (1925) on Sunday, April 10 in Keene, N.H. If there's a film you should try to see on the big screen, this is it. More details in the press release below.

For now, let me report that we enjoyed a healthy turnout for last Sunday's unusual double bill: Lon Chaney in 'Flesh and Blood' and Harry Houdini in 'The Man From Beyond,' both films from 1922.

The Chaney film, which I'd never done before, held up pretty well, with an escaped-prisoner-seeking-justice storyline that kept our audience engaged throughout. Large chunks of it are set in Chinatown, but I resisted the temptation to play pentatonic-scale-"Oriental"-sounding music.

Instead, I kept mostly to a piano & strings texture, except for a scene where a harmonium gets played, and then also when Chaney performs a sentimental tune on a solo violin. One wonders how musicians of the 1920s would have matched the on-screen action in this film.

The Houdini picture is a mind-bending affair about reincarnation that left most people scratching their heads. How can a guy become frozen in 1820, then thawed out 100 years later, to the point where he's riding around in automobiles and attending a wedding, and not realize it was a century later?

But the rousing waterfall rescue sequence that concludes the film, which was actually filmed at Niagara Falls, was enough to leave everyone satisfied.

Okay, here's the press release on 'Ben Hur.' Hope to see you this Sunday at 2 p.m. at the Colonial Theatre's new "Showroom" venue in Keene, N.H.! 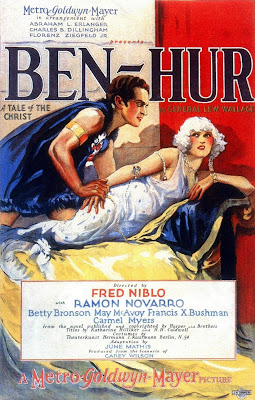 KEENE, N.H.—One of early Hollywood's greatest epics returns to the big screen with a showing of 'Ben Hur, A Tale of The Christ' (1925) on Sunday, April 10 at 2 p.m. at the Colonial Theatre's Showroom, 20 Commercial St., Keene.

Admission is $15 per person, general admission. Tickets are available online at www.thecolonial.org or at the door.

'Ben Hur,' starring Ramon Novarro and Francis X. Bushman, was among the first Hollywood motion pictures to tell a Biblical-era story on a large scale.

The film, which helped establish MGM as a leading studio, employed a cast of thousands and boasted action sequences including a large-scale sea battle. 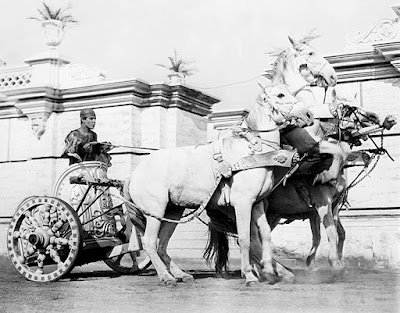 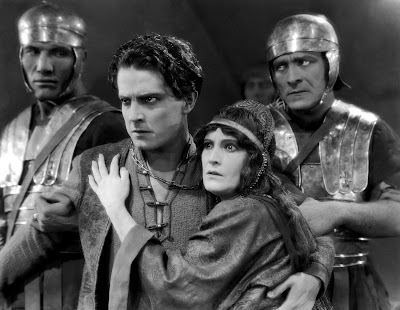 The film was remade by MGM in the 1950s in a color and wide-screen version starring Charleton Heston that garnered 11 Academy Awards. Some critics believe the original 1925 version offers superior drama and story-telling.

For each film, Rapsis improvises accompaniment using original themes created beforehand. No music is written down; instead, the score evolves in real time based on audience reaction and the overall mood as the movie is screened.

General admission is $15 per person. Tickets are available online at www.thecolonial.org or at the door. For more information, call the Colonial box office at (603) 352-2033.
Posted by Jeff Rapsis at 5:58 PM