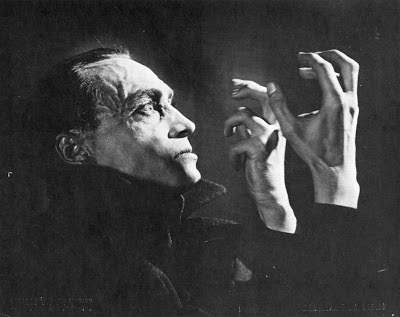 Where have those hands been? Conrad Veidt counts to 10 before losing his cool in 'The Hands of Orlac' (1924).

Things being what they are (messed up and overscheduled), I haven't had a chance to get out much advance material on 'The Hands of Orlac' (1924), which we're screening on Sunday, Oct. 28 at 4:30 p.m. at the Wilton (N.H.) Town Hall Theater.

So here's a quick list of why this one's worth attending. Ready?

• It's a great Halloween film. As as rule, any film that involves the swapping of body parts is likely to put you in the right mood for Halloween. But 'The Hands of Orlac' is especially good, as it involves a concert pianist who loses his hands in a train accident. The fun begins when they're replaced with another set ofhands ... transplanted from a just-executed murderer!

• It stars Conrad Veidt. From 'The Cabinet of Dr. Caligari' (1920) to 'Casablanca' (1942), Conrad Veidt was one of the great presences of early cinema. His face was instantly recognizable, but he was somehow able to play characters from all ages and epics. He also brought a level of intensity to his roles that few have ever matched.

• It's in a real theater with live music. An obscure Austrian film, 'The Hands of Orlac' is almost never screened anywhere, and the commercial DVD that's available has a recorded score that doesn't help the film leap to life, in my opinion. So don't miss a rare chance to see it on the big screen (and to hear what I can do with live music) at the Wilton Town Hall Theater, one of the best places around to take in a movie of any type. And their popcorn is great, too.

• Free admission! Through the generosity of the Wilton Town Hall Theatre, the silent films we do there each month are open to all—which is great, because the bigger an audience is for a silent film, the better. Those who wish to support the series (and keep it free to all) are encouraged to make a small donation in the lobby. Thanks in advance for that!

Okay, if you haven't been convinced to come by now, you must be a zombie, which means you're probably all ready for Halloween. And even if you are a zombie, you're still welcome to come—just don't suck out my brains until the picture's over, please.

If there's anything left, that is.