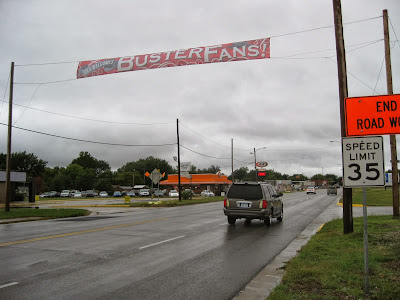 The banner greeting those arriving in Iola, Kansas from the east on U.S. Route 54.

Got a late start, not hitting the road until 9:12 a.m. Still, got to Iola, Kansas before noon, arriving under an impressive "Keaton Celebration" banner that straddles U.S. 54 as you arrive from the east. Nice!

The Bowlus Center (home of the festival) was locked up tight, so went for lunch to the B & B Country Cafe, a favorite from last year. Place was packed, and staff was struggling with giant takeout order, but had yet another plate of fried chicken, which was the day's special and is starting to become a theme of the Great Early Fall 2013 Silent Film Accompaniment Road Trip.

At the Keaton Festival, supplied live accompaniment to 'Seeing Stars,' the Hollywood promotional short presented by Hooman Mehran, so I can say now that I've officially collaborated with him.

Amused to find the name of 'Paul Rapsis' on my stipend check. The Bowlus Center folks were most apologetic about it, and director Susan Raines even walked with me across the street to have it cashed, which was the easiest solution for them. Nice! But now here I am, in the big city of Iola with all this cash on me. Watch out!

But the real big news of the afternoon was being in the presence of actor Paul Dooley, whose long list of credits include being head writer of the original 'Electric Company' PBS show in the 1970s, which I was addicted to as a kid. 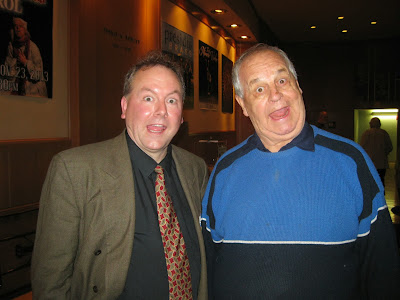 Here's me and Paul Dooley in the lobby of the Bowlus Fine Arts Center.

Dooley gave a nice presentation on Keaton, and also did a great stand-up routine that he seems to be trying out for use elsewhere. Hope I get a chance to tell him what the Electric Company means to me: I just looked at excerpts on YouTube (that amazing resource) for the first time in decades and it all came rushing back, yet another source of primary source childhood memories all locked up in bits and bytes ready to be streamed again. And he was the guy!

Skipped dinner to prepare for the evening's session, which included live accompaniment to 'Out West' (1918), the Keaton/Arbuckle short. But as I was playing prior to the start, Bill Shaffer came over and whispered in my ear (inevitably, it seems) that there was a change of program.

Instead, they'd be showing Keaton's short 'The Blacksmith' (1922) with the newly discovered footage. Okay, fine! I hadn't seen the film in years, but I actually remembered some of the structure of it (opening gag titles about the "Village Smithy," etc.) and so started getting ready mentally.

But first there were remarks from the mayor of Iola, who was welcomed with me playing "Hail to the Chief," which got a few laughs, and an award to actor James Karen, a long-time friend of the festival and of Buster himself. For a guy about to turn 90, he's in amazing shape! Sporting a beard, he resembles an older Ernest Hemingway.

And on to Buster, which came in the form of a file on a thumb drive brought over from Paris by Kate Guyonvarch. Into the laptop went the drive, and off we went. But not quite: the computer had trouble reading the file, so all we got was a jumpy series of freeze frames of Buster and then Joe Roberts chasing each other around.

I did what I could, but what can you do? They then shut it down and transferred the file to another machine right on screen in full view of the audience, giving me a chance to earn a few more cheap laughs by playing Merv Griffin's iconic "waiting" music from Jeopardy.

But it still didn't work, but they'll try it again Saturday night, I'm told. Well, at least I got to preview it! Afterwards, I couldn't resist following Kate Guyonvarch up the aisle just to tell her I was glad to help out, and that we should work together more often! :)

Still haven't had a chance to connect with her, and at this point it's getting to be a little like "Waiting for Guyonvarch." Still, it's nice to make her acquaintance after all the back-and-forth over the years.

A screening of Chaplin's 'A King in New York' (1957) followed, the first time I'd ever had a chance to see this film. Lots of interest in it, especially if you're interested in seeing how agile Chaplin was in his late 60s, and how sharp his pantomime and acting skills remained.

But the film itself was a mixed bag, and the washed out video image (and a weird rumbling in the audio whenever anyone spoke) didn't help. Alas, I came away from it thinking that was two hours of my life I wouldn't get back again, which is not the kind of feeling you want to get when attending a festival like this.

Well, props to the organizers for screening a film that rarely gets shown, and that fit perfectly into the celebration's theme of the "Fabulous Fifties," which were not so fabulous for Chaplin, anyway.

But then again, where else can hear rock 'n' roll with music and lyrics by Charlie Chaplin? So it was worthwhile in the "being complete" sense. Now all I have to do is sit through 'A Countess from Hong Kong' (1967) and I can say I've seen it all, with the exception of a few of the Keystones, probably.