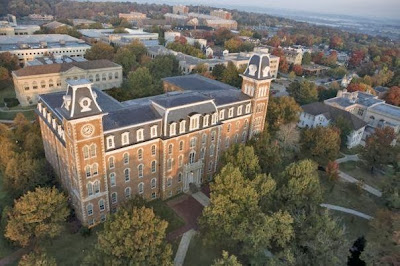 'Old Main' on the campus of the University of Arkansas at Fayetteville, site of Giffels Auditorium, home of tonight's program.

A full day in Bentonville, Ark. began with a run through streets around our hotel, which felt good. Then it was off to Crystal Bridges for more symposium activities on a day that was already warm and would soon become downright hot.

Very light attendance for the morning's discussion of City Lights. And then most people left for lunch while I sat down for more Mutuals: 'Behind the Screen' and 'The Rink.'

Had a good discussion with the few folks on hand, and also spent time teasing Sara Segerlin about the museum's lack of a piano suitable for live performance.

"You march right up to that Alice Walton and tell her it's no use filling up this place with all this old junk if you don't have a good piano on hand," I would say. Sara is nothing if not a good sport, although she probably wanted to take a swing at me before it was all over.

I went back to the hotel for the afternoon. Then dinner on my own at Neal's Cafe in Springdale, Ark., which has been serving fried chicken since 1944. Back on Interstate 540 to head to the University of Arkansas in Fayetteville, but somehow missed the exit, had to turn back, and then got disoriented as time began to run out.

Tried calling folks, but no luck. Finally took an exit, kept going, and surprised myself by broadsiding Maple St., the very road I was looking for! Somehow last year's whirlwind visit made just enough of an impression for me to recognize where I was.

Found a parking space, and was then surprised when one of the adorably cute students immediately came up to me and asked, "Are you with the Chaplin program?"

Wow! One doesn't expect to be recognized on the streets of Fayetteville, Ark. Turns out I wasn't: she said I looked clueless and she just put two and two together.

Healthy turnout in 'Old Main' for our get-together. Played a score for the Chaplin Keystone 'The Masquerader' (1914) in Giffels Auditorium on the same Steinway I played last year. This time, instead of being behind a curtain, I was actually visible to the audience. But it's always something, it seems, and this time I had no light and couldn't see the keyboard, so the score was a bit more dissonant than it should have been. :)

Afterwards came a set of excerpts from an in-progress documentary by Lynn Cadwallader on silent film music. The presentation, alas, was delayed because they couldn't get any sound! Funny how the great slot machine of life coughs up such ironies!

One the sound worked, it turned out Lyn's materials include filmed interviews with some wonderful practitioners who worked in the original era. She's based in the Boston area and hope to keep in touch with her.

I was supposed to be part of a panel discussion that followed. For this, they'd set up a long table with six chairs. As all the other experts crowded in, I figured I'd stand aside in a rare attempt to see what humility actually feels like.

But then Frank handed me the microphone anyway, and that's all I needed to start jawboning the audience into seeing 'City Lights' with live orchestra on Sunday. Still, I'm starting to learn about proportion. :)