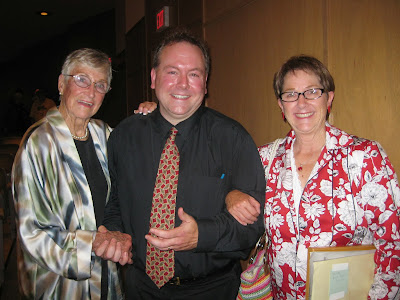 Heavy lifting today: live music for two feature films plus a good amount of impromptu fill-in. At daybreak, torrential rains as thunderstorms moved through. Worked all morning, then attended the afternoon Keaton Celebration sessions at the Bowlus Center.

First up was Kate Guyonvarch of the Chaplin Office with archive materials about Chaplin's film 'Limelight' (1952), a presentation highlighted by a clip of the scene with Keaton and Chaplin performing together.

Then came an on-stage conversation with Melissa Talmadge Cox (Buster's granddaughter) and Buster's daughter-in-law Barbara Talmadge, who played tennis on Charlie Chaplin's court and is still going strong as she closes in on 90.

Barbara tells a good story, and I hope someone sits down and thoroughly interviews her at some point. Both ladies had stories not only of Buster, but also the two "aunts," Norma Talmadge and Constance "Dutch" Talmadge.

And then I was up with music for 'Her Sister From Paris' (1925), a funny battle-of-the-sexes romantic comedy starring Dutch and Ronald Colman. It's set in Vienna, and includes a couple specific references to "The Blue Danube" waltz, so I had to get that under my fingers and ready to go.

Things fell together quite naturally, helped by the excellent condition of the Bowlus Center's 1911 Steinway grand. What a joy to skip among those keys! It really makes a difference in terms of what kind of music you can do.

The highlight for me was a sequence where a sidekick character is asked to go play a piano to cover the noise of Talmadge and Colman stealing away. He indulges in some kind of intense romantic ballad (to express his own longing for Connie), and that's what I played, even though most of the footage was devoted to the two would-be lovers.

And then, after the plot threads were tied up, I brought back the romantic ballad music for real underneath the closing scenes, which I felt lent a really effective touch. Sometimes that happens!

Near the end, I began to get that feeling that I was in fact nailing it, which is always a rush. Response was very generous, and folks afterwards had some very kind words to say about the music.

Then dinner at El Charro, a Mexican place in downtown Iola, and then back to the Bowlus for 'Seven Chances' (1925) preceded by a mixed bag of short subjects and other material.

Got laughs when Bill Shaffer announced that they'd try to keep on schedule, and I snuck in with the opening bar of Handel's 'Hallelujah' chorus. Also when Kate Guyonvarch came up to translate the French titles in the rediscovered footage from Keaton's 'Blacksmith' and I launched into the opening bars of "La Marseille."

We saw a few minutes of newly rediscovered footage of Keaton and Joe Roberts in 'The Blacksmith' that was quite good. And I had a good time doing music for Chaplin's 'One a.m.,' which I didn't realize I'd be doing and hadn't seen in years.

Also on the program: improvised music for a nice video tribute to festival co-founder Fred Krebs, who passed away last December. There was also music to go with the announcement of next year's festival, or so I thought.

For this, I plunged in with all keys blazing in my best 20th Century Fox fanfare style, only to see the on screen text announcing that there would in fact be NO Keaton Celebration next year.

What? Was this a joke? Continue the fanfare? Change to funeral music? What was going on?

I then remembered an announcement for the 50th anniversary celebration of the Bowlus Fine Arts Center for Sept. 26 & 27, 2014, and I wondered what dates the Keaton Celebration would be. Now I had my answer, and it was no joke, so I did morph the music into something a little more somber but hopeful, as organizers promise to come back in 2015.

We'll see. Not every vintage film festival has to continue forever. This same weekend, my colleagues Ben Model and Phil Carli did music for what is apparently the last "Fall Cinesation" festival in Massillon, Ohio. Rats! Never got to that one.

But these things are a lot of work, and if the same people have to keep doing it year after year, the glow eventually wears off.

The best argument for keeping the Keaton Celebration going is the reaction to 'Seven Chances,' the main event feature. Roars of laughter from a large crowd, and it somehow seems so correct that it's taking place just down the road from Buster's birthplace. People turn up wearing Buster-style porkpie hats and even in complete Buster outfits!

I feel really fortunate to have had the chance to do my own style of music at this event, and for this audience, and especially for 'Seven Chances,' and so I'm grateful to Bill Shaffer and Frank Scheide for bringing me in to help out.

At "The End," for some reason the house lights didn't come up, and I've never had so many flashbulbs go off in my face at once. But most gratifying of all were the very kind words from Barbara and Melissa, who made a point of approaching me afterwards to offer thanks for helping bring the films to life. High praise!

An afterglow followed at a nice house in Iola, followed by modest after-afterglow in the parking lot of the motel where we were staying at, featuring many very funny jokes that I will have to leave up to your imagination, or I'd have to click the "Adult Content" setting. :)