What to say about William Haines
in 'Show People' on Thursday, Sept. 19? 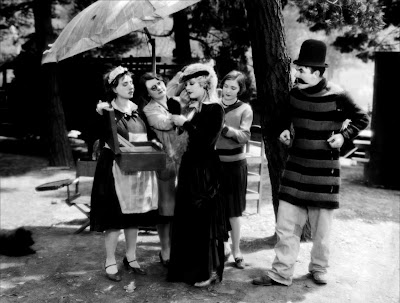 A movie within a movie: a scene from 'Show People' (1928), with William Haines (right) made up as comedy star Billy Boone.

It's not just a funny insider tale about the movie biz. It's actually a wonderfully knowing Valentine to a medium that by then everyone knew would soon be history.

Yes, it gets laughs and has a satisfying story, even if today's movie-goers recognize few of the stars in cameo roles. (With Charlie Chaplin the obvious exception. And even then, that's because he's clearly identified in several titles.)

But it's also a chance for male lead William Haines, then at the height of his career, to show his versatility as a performer.

And it's also a chance to ponder what would soon happen to Haines: that his career would be ended by his refusal to follow studio orders to keep his homosexuality a secret.

It actually makes for a wonderful story by itself: Haines refused to enter into a "sham" marriage with a starlet to make him more acceptable as a leading man to Middle America. As a result, he was blackballed from all the major studios.

But Haines, his career as a leading man over, had the last laugh by starting an immensely popular and successful interior design firm. Among his best clients: loyal acquaintances in the Hollywood movie colony. Later in life, he was said to be a favorite of Ronald and Nancy Reagan!

I usually don't mention any of this prior to a screening of 'Show People.' If I do, every time he appears on screen, a good portion of the audience will think, "Hey, there goes Ronald Reagan's gay interior decorator!" And that's not exactly good for the movie's flow.

However, one thing about successful promotion is knowing your audience. And the Leavitt Theatre, where we're screening 'Show People' on Thursday, Sept. 19 at 8 p.m., is in downtown Ogunquit, longtime coastal haven for the region's gay community.

So, for this screening of 'Show People,' I felt it was worth playing up what Paul Harvey used to call "the rest of the story." Screening or not, I think Williams Haines should be remembered as a pioneer (and a courageous one at that) in overcoming prejudice and bigotry.

That's something to celebrate, and we will with 'Show People' on Thursday, Sept. 19. Hope to see you there! Below is the text of a press release with all the details... 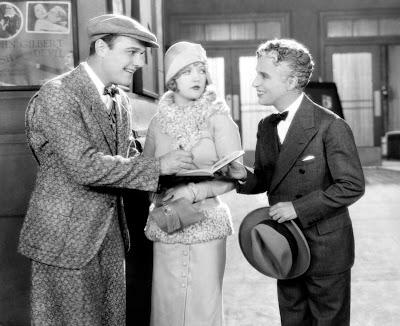 OGUNQUIT, Maine—He was the Tom Hanks his time: a leading man with a winning manner and breezy charm who always got the girl.

But the film career of William Haines, one of early Hollywood's brightest stars, was cut short for an unfortunate reason: at a time when sexual preference was a taboo subject, he was openly gay.

All are welcome to this family-friendly event; admission is $10 per person general admission. The screening, the latest in the Leavitt Theatre's silent film series, will feature live accompaniment by Jeff Rapsis, a New Hampshire-based composer who specializes in creating scores for silent films.

William Haines was one of MGM's biggest stars in the late 1920s, often playing the male lead in the studio's romantic comedies. But off-screen, Haines was gay—and, unusually for the era, he did not hide his homosexuality.

Haines maintained his star status at MGM during the move to talking pictures. But a publicity crisis arose in 1933, when Haines was arrested in a YMCA with a sailor he had picked up in Los Angeles' Pershing Square.

Mayer then delivered an ultimatum: Haines had to choose between a sham marriage to an MGM actress or giving up his career. Haines refused to submit, chosing to be himself rather than to pretend to be someone he wasn't. Mayer subsequently fired Haines, terminated his contract, and banished him from the industry.

'Show People,' directed by King Vidor, shows Haines at the height of his leading-man status. The light-hearted story follows Peggy Pepper (Marion Davies), a beauty queen from Georgia trying to break into the movies as a dramatic actress. Haines plays Billy Boone, lead actor of a slapstick comedy studio where Pepper gets her first break.

Can the young actress yearning for drama survive the indignity of pies in the face? And when her big break finally comes, will it mean sacrificing her growing friendship with Billy? And can Billy rescue the fun-loving Georgia girl from a studio that aims to invent a whole new persona for her as a serious actress, descended from European royalty?

Can low comedy win out over high drama? In answering that question, 'Show People' pokes fun at Hollywood phoniness and the culture of celebrity worship that had already emerged by the 1920s. 'Show People' also offers rare behind-the-scenes glimpses of movie-making at the very end of the silent period, when studios were rushing to prepare for sound.

"It's like they knew an era was ending, and 'Show People' is kind of a Valentine to the whole silent film experience," said Rapsis, who will accompany the screening at the Leavitt. "It's a love letter to all the craziness that went into creating the movie business."

In 2003, Show People was selected for preservation in the United States National Film Registry by the Library of Congress as being "culturally, historically, or aesthetically significant." 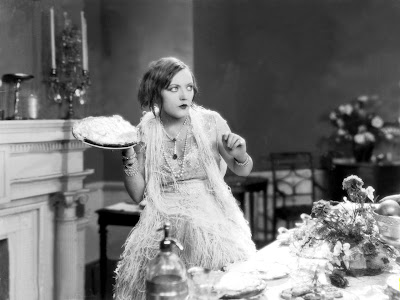 Marion Davies prepares to launch her weapon of choice.

The Leavitt Theatre's silent film series aims to recreate the full silent film experience, with restored prints projected on the big screen, live music, and with a live audience. All these elements are essential to seeing silent films they way they were intended, Rapsis said.

“These films are still exciting experiences if you show them as they were designed to be screened,” Rapsis said. “There’s a reason people first fell in love with the movies, and we hope to recreate that experience. At their best, silent films were a communal experience very different from today’s movies—one in which the presence of a large audience intensifies everyone’s reactions.”

Other upcoming features in the Leavitt Theatre's 2013 silent film schedule include:

• Saturday, Oct. 26, 8 p.m.: 'Nosferatu' (1922). Just in time for Halloween, see the original silent film adaptation of Bram Stoker's famous 'Dracula' story. Still spooky after all these years—in fact, some critics believe this version is not only the best ever done, but has actually become creepier with the passage of time. See for yourself, if you dare!