Back to school (and football!) with Lloyd's
'The Freshman' in 35mm on Sunday, Sept. 8 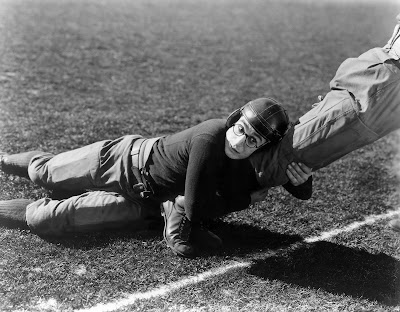 I'm not quite ready to give it up on summer, but the calendar is beginning to disagree with me. Just today, September arrived, and that puts us one week away from a screening of Harold Lloyd's 'The Freshman' (1925) on Sunday, Sept. 8 at the Somerville Theatre outside of Boston.

Also, I'm pleased to report that introducing the film will be Annette D'Agostino Lloyd, noted Lloyd author and scholar and enthusiast for all things Harold!

This is one I've really been looking forward to, as the Lloyd pictures are great for audience reactions and we've been steadily building attendance for the Somerville's monthly silent film series.

And the timing is right, too. Boston is a college town, with students now arriving for the fall semester. Plus, it's also the start of football season, with our local NFL team (the New England Patriots) starting against Buffalo on Sunday, Sept. 8. Game time is...oops, exactly the same time as our screening: 1 p.m.!

Well, you can see the Patriots play anytime, but how often do you get to see a Harold Lloyd feature in 35mm on the big screen with live music and a large audience? Okay, we're doing 'Safety Last' (1923) in October, but still, it's not every day that everything gets put back together for a Lloyd film to be seen the way it was intended. 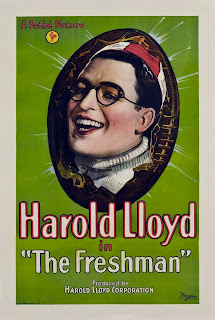 About 'The Freshman' (1925): although I never played football, I was a band geek in high school (baritone horn and sousaphone), and so went to a lot of games. And even to someone like me, one element of 'The Freshman' that's interesting is to see how football has changed since the 1920s. The game is still the same, but the uniforms and equipment have really come a long way.

Interestingly, the Lloyd crew filmed several sequences for 'The Freshman' during actual big college-level games on the West Coast. So football fans, take note: you'll get to see glimpses of a real stadium setting from nearly a century ago.

And although all of Harold's films hold up well and need little explanation to contemporary audiences, the opening of 'The Freshman' has a curve ball that most people today won't get. Harold's Dad is described as the "the best bookkeeper in the county and the worst radio liar in the state." What's that all about?

At the time, with radio so new, it was common for people to try to pull in distant signals on their home receivers. People kept logs and compared them, and apparently it was not uncommon for some people to stretch the truth just a little. Hence the humor when Harold's father, hearing his son's vaguely Asian college chants upstairs, mistakenly thinks he's received China!

China or not, I hope you'll join us for 'The Freshman' on Sunday, Sept. 8 at 1 p.m. at the Somerville Theater in Davis Square, Somerville, Mass. For more info about the film and the screening, the press release is pasted in below. See you there! Go team! 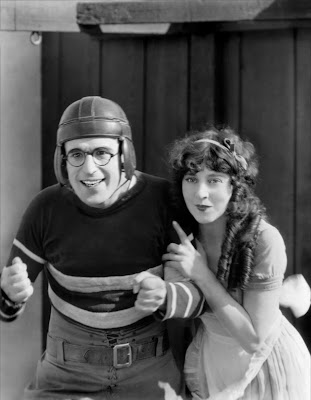 Harold Lloyd with the lovely Jobyna Ralston, co-star for most of his great features in the 1920s.

Silent film classic 'The Freshman' in 35mm
on Sunday, Sept. 8 in Somerville, Mass.

Head back to school with Harold Lloyd's comic masterpiece about college life, with live music at historic Somerville Theatre

SOMERVILLE, Mass.—What happens when a first-year student's dreams of college collide with the realities of campus life? The result is Harold Lloyd in 'The Freshman' (1925), one of the most popular comedies of the silent film era. Filled with classic scenes and a great story, 'The Freshman' endures as one of Lloyd's most crowd-pleasing movies.

'The Freshman' will be screened in the Somerville's main theater using a 35mm print made available by the Harold Lloyd Trust. The program will be accompanied live by silent film musician Jeff Rapsis. General admission is $15 per person.

The program is the latest in the Somerville Theatre's 'Silents Please' series, which offers audiences a chance to experience silent film as it was intended: on the big screen using 35mm film, with live music, and in a theater with an audience.

"Put the whole experience back together, and you can see why people first fell in love with the movies," said Rapsis, one of the nation's leading silent film accompanists. Rapsis performs on a digital synthesizer that reproduces the texture of the full orchestra, creating a traditional "movie score" sound.

'The Freshman,' Lloyd's most successful silent film of the 1920s, was hugely popular at the time of its release. It sparked a craze for college films that lasted well beyond the 1920s, and even a popular hit song, the collegiate fox trot "Freshie."

The story follows Lloyd, small town newbie, to Tate College, where he hopes to achieve fame as Big Man on Campus. Instead, his quest to win popularity becomes a college-wide joke, with Harold getting tricked by upperclassmen into hosting the school's annual "Fall Frolic" at his own expense.

Lloyd finally decides he can make his mark on the college football team, where he holds the lowly position of waterboy and serves as tackling dummy. On the day of the Big Game, can the bespectacled "freshie" somehow save the day and bring gridiron glory to dear old Tate?

For football fans, the film's climactic game sequence was shot on the field at the actual Rose Bowl in 1924. The crowd scenes were shot at halftime at California Memorial Stadium during the November 1924 "Big Game" between UC Berkeley and Stanford University. Other exterior scenes were filmed near the USC campus in Los Angeles.

Beyond its comic appeal, 'The Freshman' today has acquired an additional layer of interest in its depiction of college life in the 1920s—a time of raccoon coats, ukeleles, and many other long-gone fads and fashions. 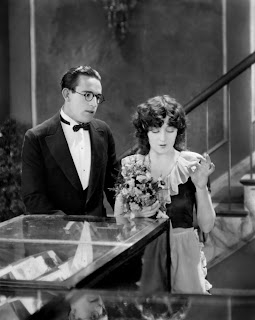 "It was long before television, the Internet, cellphones, or Facebook," said Rapsis. "To us today, it looks like college on another planet, which I think adds to the appeal of a film like 'The Freshman.' But at its core, 'The Freshman' is still a great story about people, and that's why it remains such an entertaining experience today, especially when shown as Lloyd intended it."

In 1990, 'The Freshman' was selected for preservation in the U.S. National Film Registry by the Library of Congress as being "culturally, historically, or aesthetically significant," named in only the second year of voting and one of the first 50 films to receive such an honor.

Lloyd, along with Charlie Chaplin and Buster Keaton, is recognized as one of the silent screen's three great clowns. Lloyd's character, a young go-getter ready to struggle to win the day, proved hugely popular in the 1920s. While Chaplin and Keaton were always critical favorites, Lloyd's films reigned as the top-grossing comedies throughout the period.

However, Lloyd's public image faded after his retirement in the 1930s, when Lloyd turned his energies to charitable causes such as the Shriners. He retained control over his films, refusing to release them for television and only rarely allowing them to be screened at revivals, fearing modern audiences wouldn't know how to respond to his work or to silent films in general. He died in 1971.

In recent years, Lloyd's family has taken steps to restore Harold's reputation and public image. They're released his work on DVD, and arranged for more frequent screenings of his films in the environment for which they were made: in theaters with live music and a large audience.

Despite Lloyd's fears, audiences continue to respond just as strongly as when the films were new, with features such as 'The Freshman' embraced as timeless achievements from the golden era of silent film comedy.

Upcoming films in the Somerville's 'Silents Please' series include:

• Sunday, Oct. 6, 1 p.m.: 'Safety Last' (1923) starring Harold Lloyd. Landmark comic romp that finds go-getter Harold, eager to climb the corporate ladder, instead forced to clamber up the exterior of a towering downtown department store. Filmed without trick photography. Hilarious and terrifying at the same time; one of the great thrill rides of the cinema.