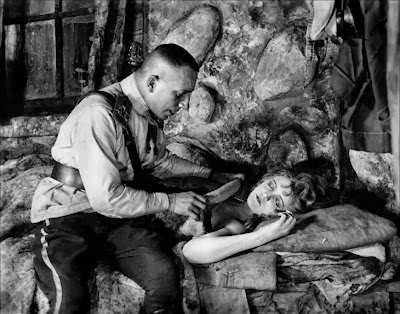 We're coming to the last screening before I leave for Arkansas and Kansas next week, and it's a big one: 'Foolish Wives' (1922), the Erich von Stroheim drama set in Monte Carlo, as rebuilt on the Universal back lot.

I like one story that comes from the making of this film: for money on-screen von Stroheim insisted on using accurate reproductions of Monte Carlo banknotes. These were so life-like that some extras began bringing them to banks and successfully exchanging them!

How ironic for for a film in which counterfeiting plays such a prominent role!

Anyway, it's a big meaty drama that runs almost 2½ hours, and will provide a good workout prior to going on the road. Come see it on Sunday, Sept. 22 at 4:30 p.m. at the Wilton Town Hall Theatre, 40 Main St., Wilton, N.H. For more info, visit www.wiltontownhalltheatre.com.

And here's something I just found out: the date of our screening is actually von Stroheim's birthday! He'd be 128 years old.

The screening of 'Foolish Wives' comes on the heels of two screenings last week: 'Show People' (1928) drew about 50 people last Thursday (Sept. 19) to the Leavitt Theatre in Ogunquit, Maine, where it got a very positive reaction. A screening of Rin Tin Tin in 'Clash of the Wolves' (1925) at Red River Theatres in Concord, N.H. was less well attended, with about 18 people on hand, but the reaction was strong.

In case you're curious, here's the road schedule next week:

• Wednesday, Sept. 25: accompanying some Chaplin Mutuals for opening night of an "Art for the Citizen" symposium at the Crystal Bridges Museum of American Art in Bentonville, Ark.

• Thursday, Sept. 26: During the day, more Chaplin Mutuals during the symposium. In the evening, I'm part of "A Tribute to Charlie Chaplin and Early Movie Music," a panel discussion at the University of Arkansas campus at Fayetteville. Not sure if I have to accompany anything here, but I'll be ready.

• Friday, Sept. 27: Day 1 of the 2013 Buster Keaton Celebration in Iola, Kansas finds light accompaniment duties: Chaplin's short 'One A.M.' in the evening and possibly some other things during the daytime seminars.

• Saturday, Sept. 28: Day 2 of the Keaton Celebration is heavy lifting in terms of accompaniment. I'm slated to do piano scores for the Constance Talmadge feature 'Her Sister from Paris' (1925), the Arbuckle/Keaton short 'Out West' (1918), and Keaton's feature 'Seven Chances' (1925).

I'll file reports here from on the road. And looking forward to October, which brings a Pickford program at Keene (N.H.) State College, 35mm screenings of 'Safety Last' (1923) and 'The Cabinet of Dr. Caligari' (1920) at the Somerville (Mass.) Theater, and about a half-dozen different screenings of 'Nosferatu' leading up to Halloween.

See you at the movies!