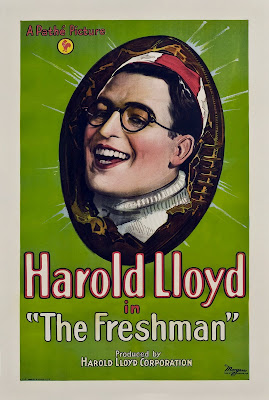 Fresh off a fun screening of Harold Lloyd's 'The Freshman' (1925) at the Somerville Theater in Somerville, Mass., I'm heading into a week with four diffent films in three different states over the next five days.

Luckily, this is New England, and the states are small. So the driving isn't too bad, although Saturday's trek up to Vermont is about 2½ hours one way.

Below is the schedule. But before I take off, a few quick thoughts about yesterday's music for 'The Freshman.'

We had a lively crowd of about 120 people on hand for an afternoon screening that took place right at the same time as opening game for the New England Patriots (so scratch off any serious football fans) and also during a fair that blocked several key streets around the theater. (Scratch easy access.)

The score marked the debut of my new referee's whistle for the football scenes as well as a call bell for the "Fall Frolic" sequence.

I blew the whistle right at the start, to get things going, but then held off until the climactic game scenes. I didn't use it at all during the extended football practice sequence because no one is visibly seen blowing a whistle, and besides, a little goes a long way.

So it was nice to hear afterwards from some folks who were glad I used it sparingly. Even so, a couple of times during the climax, the whistle was the victim of "dry mouth" syndrome, meaning when I tried to blow on it, nothing came out!

The call bell was a little trickier because it kept sliding down the the synthesizer's cover panel and onto my keys, making it kind of a nuisance during the film. And then, when it was time to use it, it was tougher than I thought to synchronize hitting it to the scenes on-screen of a bell being hit impatiently, while at the same time keeping the dance music going with my left hand.

Maybe I'm a little too demanding on myself, but a sound effect cue like this really has to be exactly right on or it's not worth doing, because then it draws attention to itself and kills the comedy. I was close, but didn't quite hit one cue exactly right, I thought.

Afterwards, no one seemed bothered by it. But that didn't matter because it bothered me, and I found myself wishing for another chance.

Things went well overall, though, especially considering the traffic diversions around the theater. Any kind of disruption can effect a performance, and I did have a tough time getting into the film, but it all came together for Harold's big scene with Jobyna and then the big game that follows.

I also had the pleasure of being interviewed by Lisa Mullins, a public radio journalist whose work is heard on 'The World' and other programs. She's planning on putting together a piece that might hit the Boston airwaves prior to our next Somerville Theatre screening, another Lloyd film: 'Safety Last' (1923) on Sunday, Oct. 6 at 1 p.m. As they say, stay tuned!

In the meantime, here's a round-up of this week's busy schedule, which brings a mix of drama and comedy...

• Tuesday, Sept. 10, 2013, 6 p.m.: "The Tempest" (1928) starring John Barrymore, Camilla Horn; Carpenter Memorial Auditorium, Manchester Public Library, 405 Pine St., Manchester, N.H.; (603) 624-6550; Manchester Public Library. Epic drama in which an officer in the Czar's army (Barrymore) falls hard for a haughty princess (Horn), who spurns him and causes him to be stripped of rank. But the tables are turned with the Russian revolution, which upends the aristocracy and puts the soldier and the princess at the mercy of forces that no one can control. Monthly series of rarely screened silent films presented with live music in 1913 auditorium. Admission free, donations encouraged.

• Wednesday, Sept. 11, 2013, 7 p.m.: "The Cameraman" (1928); Rogers Center for the Arts, Merrimack College, 315 North Turnpike St., North Andover, Mass. (978) 837-5355. Portrait photographer Buster exchanges his still camera for a movie camera in an effort to break into the newsreel business and win the attention of a special gal. Spectacular movie-themed Keaton comedy filled with great stunts filmed on a grand scale. Silent film with live music on the campus of Merrimack College. Free admission. For more information, visit the Rogers Center online.