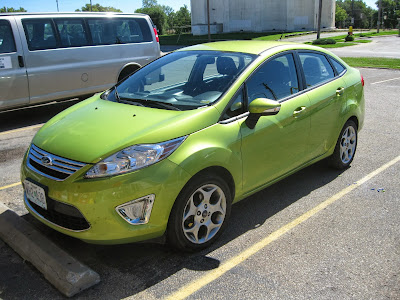 The lime green chick magnet that I'm tooling around Kansas in this week. Otherwise known as a Ford Fiesta.

Here I am in Topeka, Kansas, preparing for the four-hour trek down to Bentonville, Ark. later today.

That's where the four-day "Art for the Citizen" symposium opens tonight at the Crystal Bridges Museum of American Culture. I'm doing live accompaniment for at least one Chaplin short, maybe more. We'll see.

But before that happens, here's an up-to-date account of events so far on the Great Early Fall 2013 Silent Film Accompaniment Road Trip:

Yesterday saw an early flight (6 a.m.) out of Manchester, N.H., putting me in the Kansas City airport just after 10 a.m. local time. Nice to get so far so early in the day. I often wonder what the covered wagon folks would think of covering so much ground so quickly -- in this case, half a continent before lunch!

The airport has a good free wireless signal, so I worked there until mid-afternoon, also scoring a nifty shoe shine for $7.

I then hopped in my rented car (a lime green Ford Fiesta!) and sped across the prairie to the Candlewood Suites in Topeka, which I selected because the rooms have DVD players (to preview discs I brought) and also because this morning I wanted to go over to Washburn University and use one of the piano practice rooms.

Arriving in Topeka under rainclouds, I stopped at my favorite thrift store on the city's north side. I went in without any intention of buying anything, but came out with two sport jackets, a black shirt, two neckties, swim trunks, and a t-shirt from Omaha, Neb. Total cost: $14.60.

This is the same place where I purchased the now-legendary "Mulatto Chaplin" statue several years ago and presented to Bill Shaffer of the Kansas Silent Film Festival.

I was exhausted by then, so took a nap. Then, instead of working on Tuesday night, I met Bill Shaffer (the Mulatto Chaplin caretaker) for what turned out to be a two-hour dinner at the Tuptim Thai Restaurant, during which we consumed an enormous amount of some of the best Thai food I've had outside of Thailand itself.

My wife jokes that the only reason I do silent film music is because of the dining possibilities. I'm beginning to think she's right.

Big news in Topeka: what for a long time was the Holidome on Fairlawn Boulevard, site of the very first Kansas Silent Film Festival afterglow that I attended back in 2000, has recently been rebranded a Ramada Inn!

As Yeats wrote, things fall apart, the center cannot hold. Funny how things change around you, bit by bit, until at some point you find yourself in a different place, even if you've been standing still.

But then you've changed as well, haven't you? So a large part of life, I think, consists of celebrating the present, as it's a place that we'll only visit once in our lifetime. May as well make the most of it!

So today's agenda consists of going out for a short run, packing up, heading to Washburn University to use a piano room until noon, and then hitting the road to get to Bentonville by 4 p.m. if possible to allow time to get ready for Opening Night!